Address by Prime Minister Viktor Orbán at the 2nd International Conference on the Persecution of Christians
source: miniszterelnok.hu
26 November 2019, Budapest

Your Eminence, Your Excellencies, Ladies and Gentlemen, Dear Brothers and Sisters,

It is an honour to welcome you. My work is cut out, addressing you after bishops – indeed after a cardinal and a patriarch. I once received a booklet entitled “Mini Praxis Pietatis” from one of the bishops who spoke before me, who is also the leader of my faith community. This booklet says the following about speech: “Speech. If possible, say nothing. If you must speak, do not go into detail, do not complain, do not boast.” You can see that over here Christian speakers don’t have an easy time. So I won’t go into detail, I won’t complain and I won’t boast. Following the booklet’s instructions, today I can talk about one thing: why Hungary – or more precisely the Hungarian government – is doing what it is doing, and why it is Hungary that is standing up for persecuted Christians. I will try to answer these questions.

One thousand one hundred years ago the majority of the Hungarian tribes – hundreds of thousands of people – arrived in this region, and settled down to start their lives here. We were not the first: many other peoples came here before us, but they disappeared, died out, or simply moved on. To this day Hungarians are curious to find out why we didn’t suffer the same fate. Why haven’t we Hungarians disappeared? Why have we Hungarians survived, even though in this region we are outsiders? We’re surrounded by Germanic and Slavic peoples, and we don’t belong to any of them. We’re also outsiders culturally: our language is unique, with no relations in the region; our songs, our literature and our dances are characteristic of us alone. The most widely accepted answer is that our military virtues and indisputable vitality were in themselves not sufficient reason for our survival. The most widely accepted answer, the key to our survival, was our adoption of the Christian faith. There are some who regard this as primarily a diplomatic coup, as an achievement of statecraft – this happened a thousand years ago. And indeed it was. But above all that – or rather before all that – it was also a spiritual rebirth, and a true conversion. Here, a thousand years ago, there was the birth of a special Christian cast of mind, and a special Hungarian Christian state. Over the past one thousand years there were times when we left this path, but we always found our way back eventually. This is why the Hungarian Constitution states: “We recognise the role of Christianity in preserving nationhood”. So the Hungarian people and the Hungarian government believe that Christianity can help peoples and nations to survive, as it has helped us.

Our first Christian king was more than an outstanding ruler; he was also a prophet. He wrote a book, a set of guidelines, which would become a moral and political compass. Though he wrote it to his son a thousand years ago, we Hungarians read it as a personal message to us. And we believe that if we heed his words, if they form our solid ground, then we can build for ourselves a strong country, a flourishing culture, a loving home and a happy family. This is Hungarians’ political manual, and to this day we work according to its advice. Let me quote some of this advice. “Exercising the virtue of kindness you will reach the highest state of happiness. Be merciful to all who are suffering violence, keeping always in your heart the example of the Lord who said: I desire mercy and not sacrifice. Be patient with everyone, not only with the powerful, but also with the weak. Finally be strong lest prosperity lift you up too much or adversity cast you down. Be humble in this life, that God may raise you up in the next. Be truly moderate and do not punish or condemn anyone immoderately. Be gentle so that you may never oppose justice. Be honourable so that you may never voluntarily bring disgrace upon anyone.” And here is our favourite, the Hungarians’ favourite passage: “Remember that […] you must rule without passion, pride and ill feeling, in peace, humble and modest in your soul, as all men are born in an equal state, and nothing shall raise you but humility, nothing shall strike you down but pride and ill feeling.” Today also this guides the work of the Hungarian government. The Hungarian people and the Hungarian government believe that Christian virtues can lead those who exercise them to peace and happiness. This is why our Constitution states that “The protection of the constitutional identity and Christian culture of Hungary shall be an obligation of every organ of the State.” This is the heritage, Your Excellencies, which imposes upon us the obligation to protect, as much as our strength allows, Christian communities around the world which are suffering persecution.

Hungarians account for 0.2 per cent of the world’s population. Is there any point in a nation of this size taking a stance and standing up for a cause? Our answer is “yes”. And your presence, attention and encouragement – your presence here today – convince us of this. And of course there is the history of Christianity: in their day the Twelve Apostles surely accounted for a smaller percentage of the world’s population than we Hungarians do today; yet here we all are. We are convinced that good inspires good, the Hungarian people’s support inspires courage, the example we set can spread far and wide, that action can set the paralysed free and can restore our faith in the meaning of personal action. When we raised action against the persecution of Christians to the level of state policy, who would have thought that a few years later so many of us would be here in Budapest?

The next question that the Hungarian government must answer is this: Isn’t there enough to do combating anti-Christian phenomena here in Europe? Why do we need to provide help on other continents? The Hungarian government is convinced that these two aspects – the problems facing Christianity in Europe and the persecution of Christians in Africa and the Middle East – cannot be separated. The facts are widely known: around the world, of those persecuted for their religion four out of five are Christian; in 2018 alone, 245 million Christians suffered persecution; 4,300 Christians were killed because of their faith – and these are the people we know about; 1,847 Christian churches and other Christian institutions were attacked. Yet Europe is silent – silent time and again. Some mysterious force seals the lips and ties the hands of European politicians. In Europe the persecution of Christians can only be seen as a human rights issue. And if it is a human rights issue, Christians cannot be named specifically, but only alongside other people persecuted for their faith. As a result, Christians and the persecution of Christians is dissolved within the diverse family of the religious persecuted. This is some credit to politicians, and it mustn’t be underestimated; but we must realise, we should understand, that those who treat the persecution of Christians as merely a humanitarian problem fail to talk about the most important aspect. An organised and wide-ranging attack is being made not only on individual human beings, not only on individual communities, but on an entire culture: our culture, our civilisation. Not only in Africa, not only in the Middle East, but also here in Europe – in the land of the most successful Christian civilisation in history. The forms taken by the attacks are varied: population exchange, immigration, stigmatisation, ridicule, the muzzle of political correctness.

Why are we talking about this here in Budapest, of all places? I have personal experience of the fact that there are many good, true Christian politicians working in Europe today; but in the current zeitgeist, its media landscape, and under the burden of ongoing coalition talks, they’re unable to speak out, don’t dare to and don’t want to. Here in Hungary the situation is different: there is a coalition-free government, political stability, a general atmosphere opposed to immigration; there is a majority demanding the defence of Christian culture, which states that instead of bringing problems here, we should take help to where the problems are. Hungary lies on the route of the Muslim immigration invasion; it must defend itself, and here in Hungary everyone knows that. The starting-point for Hungarian policy is that we Christians have the right to defend our culture and the way of life that has grown from it, and that we are free to do this. In Hungary there is also general agreement that assistance must be taken directly to communities in distress: not provided to agencies, but directly to communities in distress. Therefore we make contact with church leaders there, because we know that they take full responsibility for their communities, and we know that they persevere in the most appalling circumstances. And unlike politicians in many European countries, we believe that people must be encouraged to live and flourish in the lands in which their ancestors have lived for centuries. What we must help them to do is not to move away, but to stay in their homes. Therefore, through the “Hungary Helps” programme we’re financing the rebuilding of many schools, hospitals and homes in Iraq and Syria – in places where perhaps people had not even known of the existence of Hungary. We’re also helping many persecuted young Christians from the Middle East and Africa to study at universities in Hungary: young people who – due to their faith – could perhaps never gain admission to such institutions in their own countries.

Ladies and Gentlemen, Your Eminence, Dear Brothers and Sisters,

Finally, on hearing about the persecution of Christians, the greatest mistake Europeans can ever make is to say that this could never happen to them in their own country. Many people share this delusion, even though Europe has been repeatedly struck by the terrorism. We also know that the western countries of Europe have provided the Islamic State with many soldiers who were born and went to school here in the West. We also knows that illegal and uncontrolled migration flows have resulted in the arrival in Europe of masses of adherents of radical Islam. Demographic forecasts also indicate that in the not too distant future there will be European countries undergoing rapid change in the religious and cultural composition of their populations. Everything that has happened in Syria and Iraq – or what is happening in Nigeria today – is much closer to us than many people think. We believe that the only thing that can save Europe from this is for it to find its way back to the source of its true values: to Christian identity. To put it briefly, Dear Brothers and Sisters, we Europeans are also in great trouble. I am convinced that today the greatest help in saving Europe can be provided by precisely those people whom we are helping right now. The resistance of those who suffer is the sowing of seed. Today we are giving persecuted Christians what they need: homes, hospitals, schools. And in return we are being given what Europe most needs: Christian faith, love and perseverance. In this spirit I wish you a valuable conference. 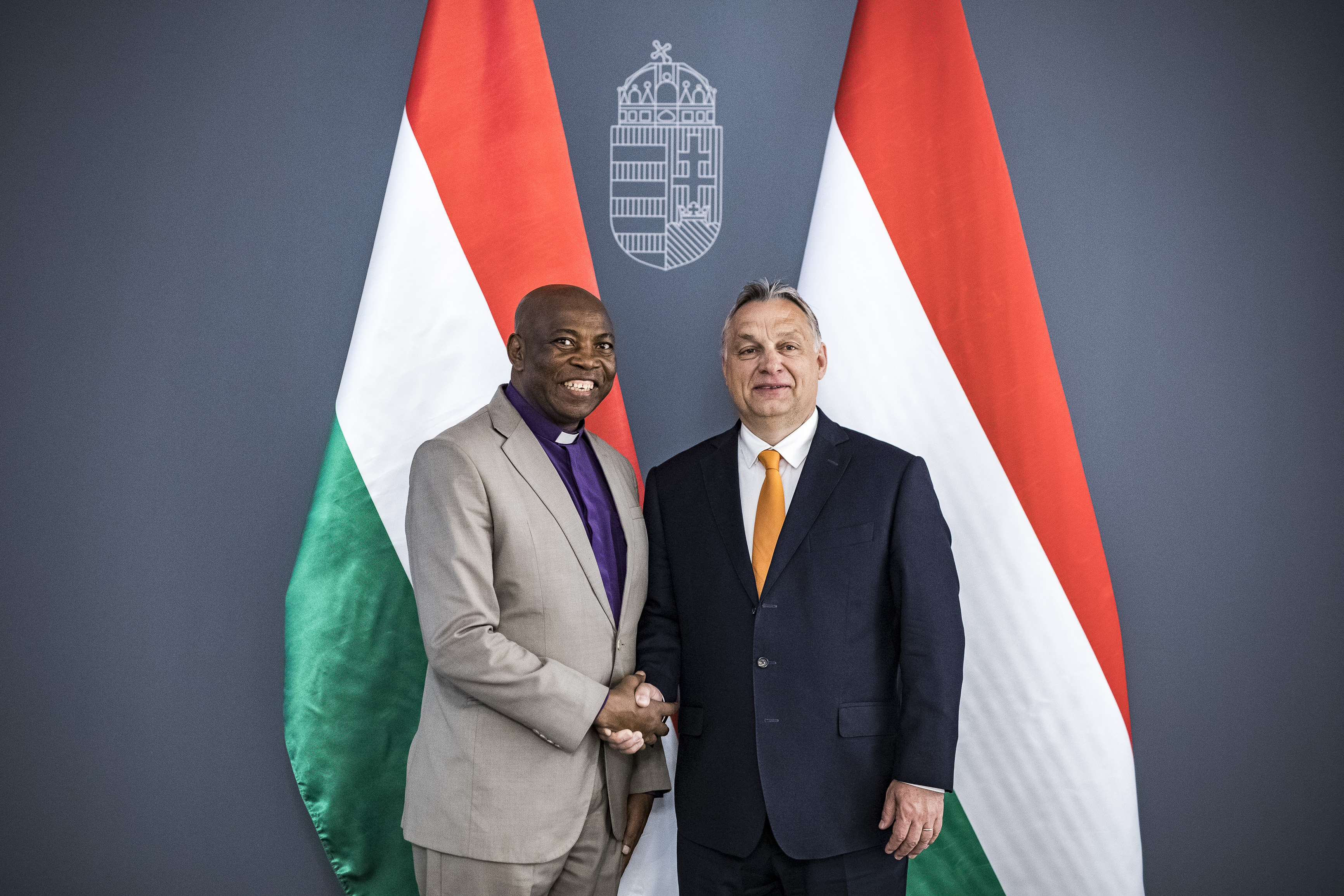