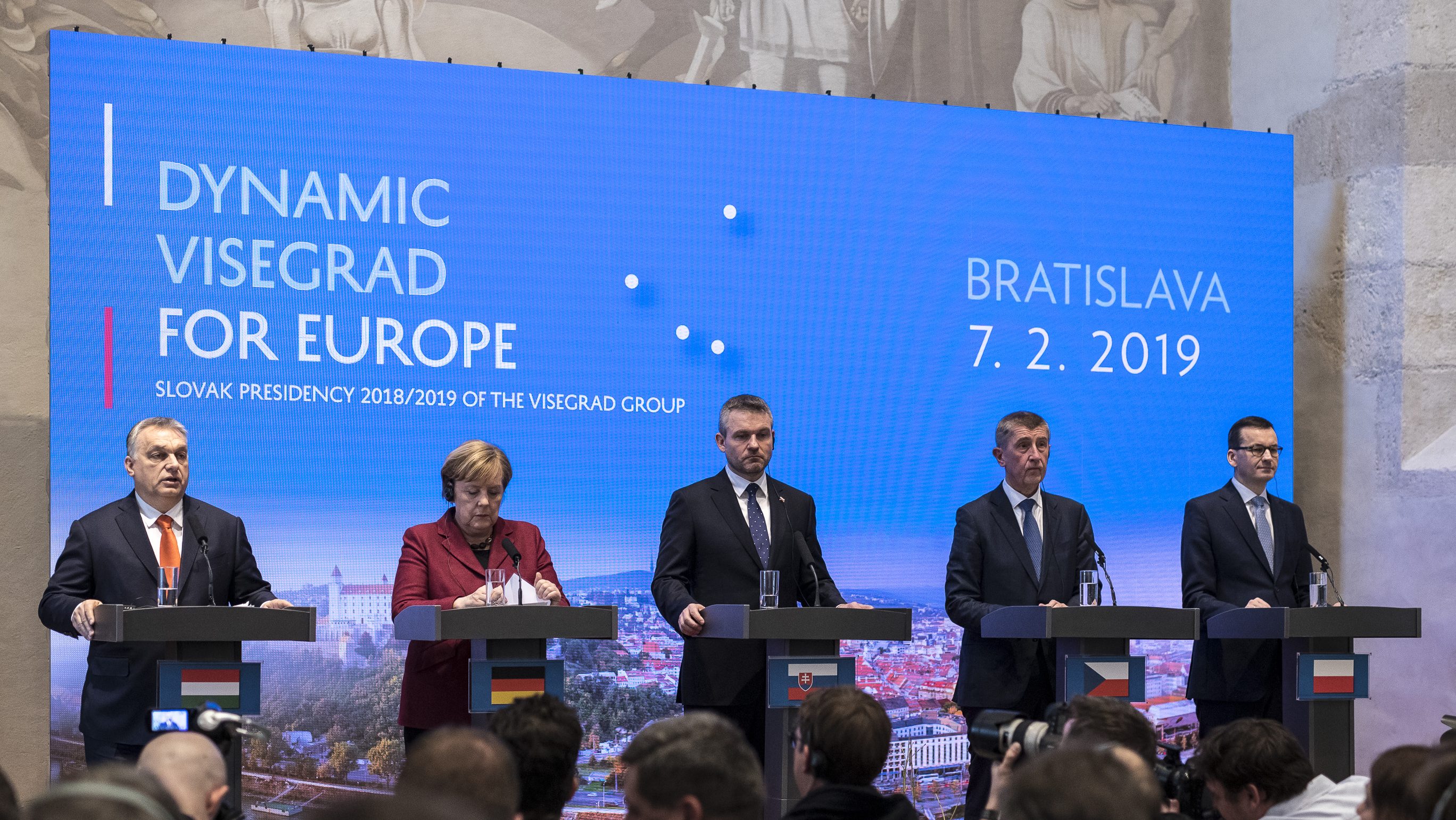 All major decisions must be postponed until after elections to the European Parliament
07. 02. 2019.
| source: MTI
At a meeting of government leaders from Germany and the Visegrád Group (V4) in Bratislava on Thursday, Prime Minister Viktor Orbán said that all major decisions will have to be deferred until after the decision made by European citizens in May – in the elections to the European Parliament (EP).

Leaders of the Visegrád countries (the Czech Republic, Hungary, Poland and Slovakia) had talks with German chancellor Angela Merkel. At the joint press conference following this meeting Mr. Orbán stressed that after the EP elections there should be a continuation of the cooperation between V4 and Germany, which he described as now having “a positive and honest tone”.

The Prime Minister said that he sees the participants at their meeting as the EU’s core states, because the core of Europe is formed by countries with exceptional performance. In terms of government debt, budget deficits, exports, unemployment rates, banking systems and structural reforms these are Europe’s core countries, he observed, and together with Germany the V4 is the engine of growth in the European economy. He noted that these countries agree that they want a strong Europe and that they want to work together in the future.

Mr. Orbán stressed that one cannot know what the European Union will be like after the EP election, but it is certain that it will not be the same as it has been until now. The EU will change, but direction of that change will be decided by European citizens, he explained, adding that “if we want a democratic Europe – and that is what we want”, its character and direction of progress may only be decided by its citizens.

The Prime Minister remarked that “One can argue about different kinds of democracy – liberal, illiberal, or indeed Christian – but there is no doubt that what cannot be left out of the formula for democracy is the demos”. He continued: “If we were to disregard the will of European citizens, we would not be building a European Union, but an empire, and we would find ourselves returned to our starting point three decades ago; thirty years ago we rose up against being forced to follow orders issued from a centre of imperial power.” He added that the V4 countries had freed themselves from that predicament, and do not want to return to it.

Mr. Orbán described the talks that had just concluded as being positive and honest, because “shared historic success will always override present disputes”. This historic success is “sizeable”, he pointed out, because thirty years ago Germany and Europe were still divided in two, but both have since been reunified.

In reply to a question, the Prime Minister told the press that the EU’s Member States have different views of the world, and this fact has been most clearly revealed by the issue of migration. Nevertheless, he stated, it is good that everyone has a different perspective on the world, and in the EU differences are an asset.

In reply to another question, Mr. Orbán said that “eighty per cent of the EU funds we receive find their way back to the contributor countries”, and accordingly “we cannot accept reproach of any kind”. He also added that any European company can submit bids for projects announced by states in receipt of EU funding.

He also said that on Monday he will be meeting US Secretary of State Mike Pompeo in Budapest, and that “the agenda will include military and security policy issues”. A priority topic for discussion will be Ukraine, which the Prime Minister described as an important neighbour, but one which Hungary believes is causing difficulties in relation to cooperation between Ukraine and NATO. He added that “Hungary has a pro-Ukrainian government, but Ukraine has an anti-Hungarian government, and this generates conflicts”.