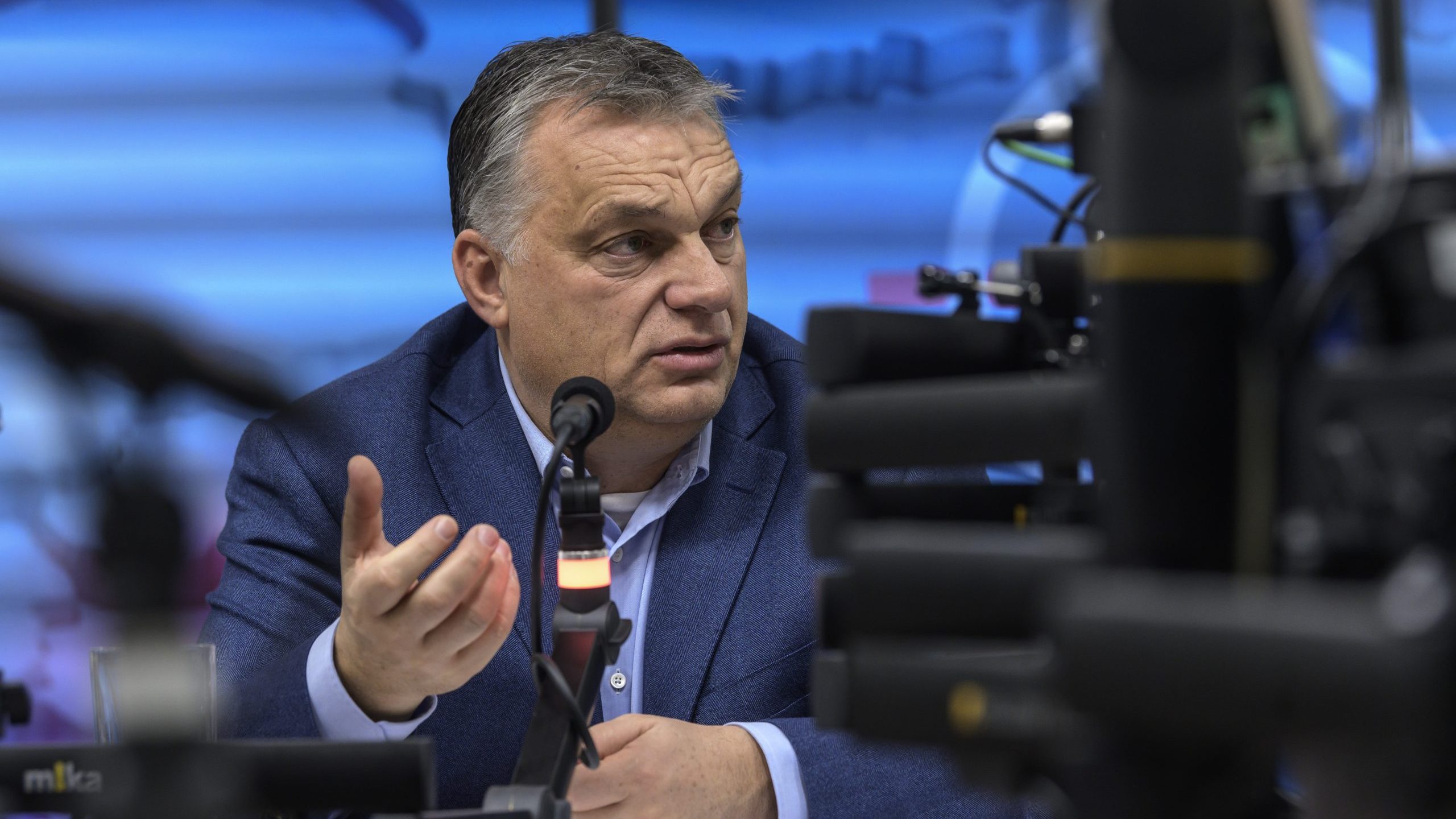 At this time, we must stand together; this is the moment when we must achieve a breakthrough improvement in physicians’ pay
05. 10. 2020.
| source: The Prime Minister/MTI
We have a difficult period ahead because “we have had enough of the virus, but the virus has not had enough of us yet,” it is spreading faster than before, Prime Minister Viktor Orbán said on Kossuth Radio’s programme ‘Sunday Paper’.

As long as there is no vaccine, containment will play the main role which is gradual; with the aggravation of the situation, ever further hospitals will be opened, and ever further physicians and nurses will be assigned to hospital beds, the Prime Minister said, stating that “we will be able to keep up”.

He said according to mathematical calculations of probability, the highest load is believed to be around 200,000 infections throughout the country, including 16,000 requiring hospitalisation and 800 to 1,000 assisted ventilation. In the interest of avoiding underestimating the possible numbers, the government is calculating with the simultaneous infection of as many as 400,000 persons – as the peak load – which would necessitate the availability of 32,000 hospital beds and a matching number of physicians and nurses who will have to be deployed in hospitals potentially away from their homes. Therefore, today their lives are very difficult, “we owe them maximum gratitude,” Mr Orbán said, indicating that no one is happy about this situation, but as long as there is no vaccine and the epidemic is in an ascending phase, reorganisations are inevitable.

He also said the second wave of the coronavirus epidemic will be longer and more difficult, and therefore we will have to implement reorganisation measures and simultaneously increase the burden-bearing capacity of health care workers.

He highlighted that the Hungarian Chamber of Doctors had bombarded the government with their proposals for months, and there was a debate within the cabinet as to whether an exceptional pay rise in the case of one particular group goes against the fact that at this time we must protect jobs and earlier wage and living standards.

In this regard he took the view that the epidemic was for, rather than against a significant pay rise for physicians. “At this time, we must stand together; this is the moment when we must achieve a breakthrough improvement in physicians’ pay,” Mr Orbán said, indicating that based on the Chamber’s proposal gratuities will be phased out. According to his expectation, by January they could clarify all details.

He also added that at present the system regarding the employment status of doctors is complicated and non-transparent. Therefore, they will create a new health care employment status for those working in hospitals operated by the state, churches and local governments, and a specific, standardised set of rules. Regarding the rate of the rise, he said “we can say salaries will double,” but there is no single standard figure, the change will not have the same impact on the pay of all physicians; they accepted the recommendations of the Chamber. He mentioned as an example that if a resident’s salary is HUF 300,000 at present, it will be HUF 600,000 after the pay rise.

In the context of the European Commission’s rule of law report, he said a chronology of events reveals the full picture. First, the European Commission published a migration plan which is unacceptable for the V4, and then the Vice President of the European Commission, Vera Jourová attacked Hungary, “declaring Hungarians to be numbskulls” which is not acceptable as “there is a red line”. A leader of the EU cannot speak disrespectfully about the citizens of any EU Member State, including Hungarians, Mr Orbán stated, observing that if she had said the same about the Germans or the French, “she would have been fired straight away”. “We want equal treatment, we can’t be insulted the same as the Germans or the French can’t be,” he added.

It was after this “attack” that the rule of law report was released which the Prime Minister regards as “a Soros report” given that 12 of the 13 sources cited in the report are in the pay of George Soros. Therefore, he described the report as an open and concerted attack.

He advised the European Commission to better assess its strength and the challenges facing the EU because the continent is suffering from a pandemic, and so there is a single task, to contain the virus, this is what we should concentrate on. Despite this, they are attacking Member States, are placing migration back on the agenda and “are generating incomprehensible rule of law debates”.

He also indicated that he has not yet received a reply to his letter sent to President of the European Commission Ursula von der Leyen in which he pointed out that Vera Jourová’s resignation was indispensable.

On the programme, Mr Orbán was also asked about the fact that the German national public service radio subsequently corrected an article relating to an interview with Vice President of the European Parliament Katarina Barley which said no less than that, according to Ms. Barley, Member States such as Poland and Hungary must be financially starved because in these countries the violation of the principles of the rule of law is not confined to individual, isolated incidences, but is in actual fact systemic. According to the radio, the Vice President used the expression ‘financially starved’ in connection with Hungarian Prime Minister Viktor Orbán.

The Prime Minister said 30 years ago the European Parliament was not the vulgar, repulsive place it has been reduced to by some people. “How can you say – especially in light of the history and past that the Germans have – that we will now starve some countries?” he asked.

He said, it is even more revealing at the same time that after the Hungarian and Polish protests “they simply took us for numbskulls, utter fools and said that the woman didn’t say that […], we tampered with what she said. We saw things like this during the Rákosi-era when exercising self-criticism, (journalists) publicly apologised, saying ‘we made a mistake, not the politician’”.

“What state of affairs prevails in that country as regards democracy, freedom of the press and media pluralism?” the Prime Minister asked.

In his view, European politicians find it depressing that the “slice of cake” is continuously shrinking as while twenty years ago the EU contributed 24 to 25 per cent to the world’s total economic output, today this percentage stands at just 15. This is the pressure that politicians are sensing, there is tension on their home turf, living standards are stagnating or deteriorating, and there are high sovereign debts, he said.

However, instead of identifying the root of the problems, nations are at each other’s throats, he pointed out, underlining that in such a situation it would be the duty of the leaders of the EU “to cool down the system,” to facilitate cooperation among Member States, but instead they throw insults about and attack countries with “migration and Soros reports,” meaning that “EU bureaucrats are doing the very opposite of what they should be doing at such a juncture in the history of global civilisation”.

Regarding the EU recovery fund planned to be set up due to the coronavirus epidemic, Mr Orbán said Hungary does not like the idea of a loan to be repaid over a period of 30 years, but is prepared to take part in it because there are EU economies in a difficult situation which need money immediately. However, the Member States forming part of the so-called “frugal group are now saying things which could frustrate the whole scheme,” he continued. For this event, the proposal of the Hungarian government is that should collective borrowing fall through, countries that need money should join forces; this would be an intergovernmental solution, without the involvement of EU institutions. He added that he would be happy if this could be avoided; however, should this happen, it would not be tragic for Hungary.

“Everything is ill-timed in Brussels, there is a pandemic, there are ongoing containment efforts, we should concentrate on these tasks, rather than tying complicated legal conditions to disbursements because this could even lead to the collapse of some countries,” he said in conclusion.

In the context of the 10th anniversary of the red sludge disaster, Mr Orbán said they had not abandoned the inhabitants of the settlements concerned, they had helped them, rebuilding the entire neighbourhood, and this rebuilding project showed the unity and greatness of the Hungarian nation, and the strength inherent in standing together. “This was a serious trial for us all,” he said, highlighting that hundreds or even thousands could have died in the disaster.

Finally, regarding a new story book in which the prince marries another price and the princess is a feminist and a lesbian, the Prime Minister said the debates related to the perception of homosexuality are complex. In Hungary there are laws relating to homosexuality, these are based on “a highly tolerant approach, meaning that the Hungarian people are tolerant of this phenomenon; in actual fact, Hungarians are so tolerant that we take provocative demonstrations of this kind quite patiently,” he said.

“Hungary is a patient, tolerant country as regards homosexuality. But there is a red line that cannot be crossed, and this is how I would sum up my opinion: Leave our children alone,” Mr Orbán said.