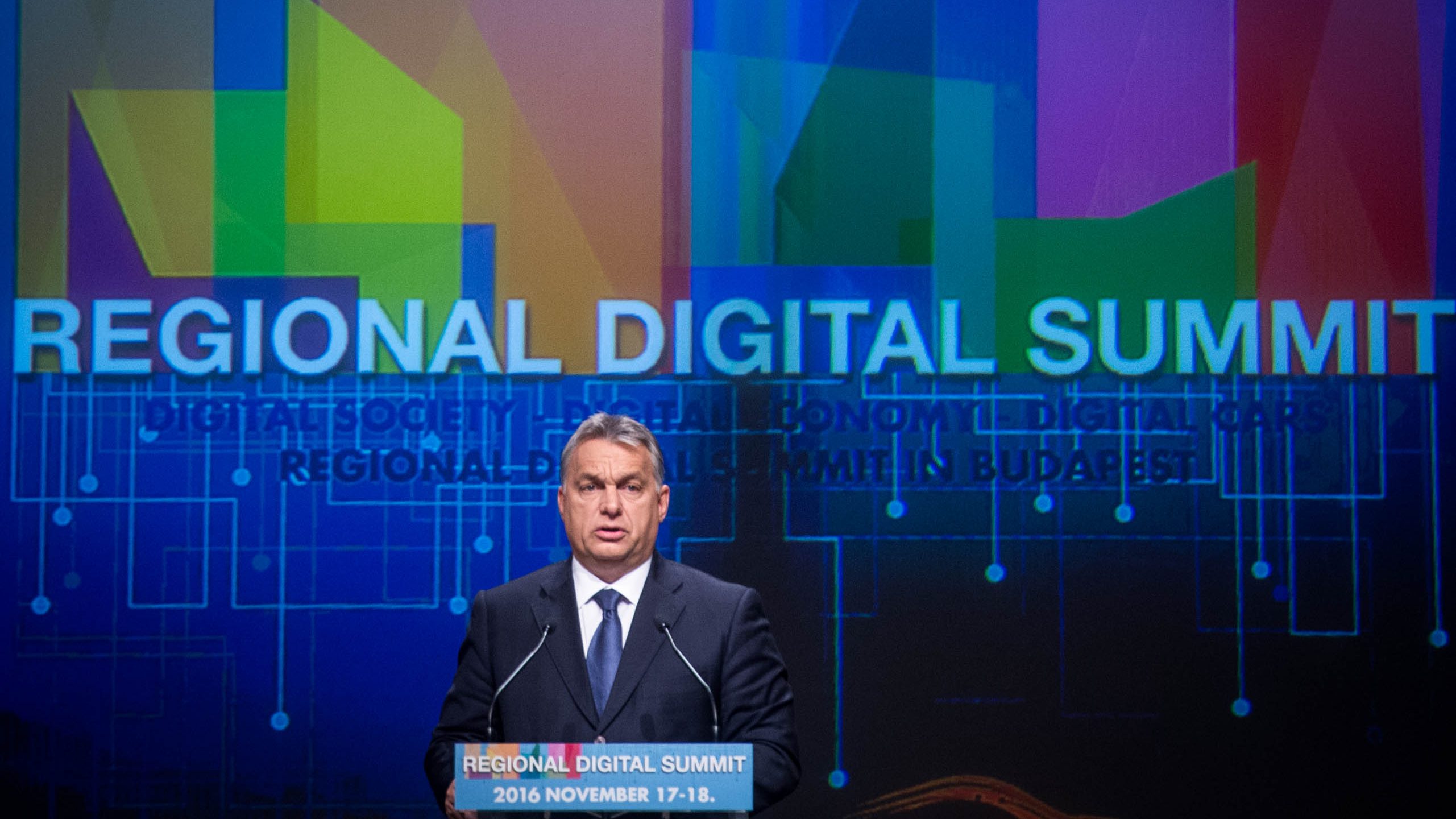 Corporation tax to be lowered to nine per cent next year
17. 11. 2016.
| source: Cabinet Office of the Prime Minister
At the Regional Digital Conference in Budapest on Thursday, Prime Minister Viktor Orbán announced that corporation tax will be lowered to single digits next year: a rate of nine per cent will apply equally to small and medium-sized enterprises and large corporations.

He added that this was decided at the Cabinet meeting on Wednesday, after a proposal from the Minister for National Economy, and earlier consultations with employers. Mr. Orbán said that, with regard to increasing the minimum wage in Hungary, he had asked the Minister for National Economy to do as much as possible in seeking to raise it to as high a level as businesses can reasonably sustain.

EU should permit reduction of VAT on digital services

Prime Minister Viktor Orbán asked the European Commission not to seek to keep VAT on digital services high due to some logic of equalisation, but to allow countries to lower the rate if their “budgets can withstand this”, and where it makes sense in terms of industrial policy.

At the conference Mr. Orbán added that he will ask the European Commissioner for Digital Economy and Society Günther Oettinger – who was in attendance – to advocate categorising digital services as “basic needs”, similar to milk and bread.

The Prime Minister said that there are plans for VAT on internet services to be reduced from 27 per cent to 18 per cent in Hungary next year, and the Government would like to further lower it to 5 per cent in 2018.  At present the European Commission does not accept this, however.

Digitalisation is both an enormous opportunity, and a major source of threat, he said. The key word for Europe is competitiveness, but the continent’s competitiveness has been declining for years, and the leaders of the EU have not yet found a way of stopping this decline.

Mr. Orbán said that, however, “every cloud has a silver lining”, and with a combined population of 64 million the Visegrád countries have become one of the pillars of European growth – even though Europe’s global position is not improving. According to this year’s trade figures, the volume of bilateral trade between the V4 and Germany is a number of times greater than the figures for trade between Germany and either the United States or France.

The Prime Minister said that the result of the US presidential election also testifies to the shock caused by concerns about globalisation. If the favourable impacts of globalisation and digitalisation are distributed unevenly, major resistance towards these processes may develop in society. The digital revolution, he said, can create not only silicon valleys, but also rust belts.

It is the duty of political leaders to wisely manage and control the processes of digitalisation. In this the countries of the East-Central European region have enormous growth potential, as they are not welfare benefit-based societies, but work-centred economies.

The competition between the new era’s winners and losers will be decided by their ability to transfer digitalisation’s advantages to the economy, he stated. Mr. Orbán said that he agrees with Mr. Oettinger’s statement that the region’s most direct path to the digital era is offered by the automotive industry. In the Visegrád countries alone, 3.3 million vehicles are manufactured annually, and the car production sector is the one which generates the most research and development, and which also encourages innovation and job creation. The future of this sector will be decisive for the entire region.

The production of cars will also have a positive, galvanising effect on other sectors. The very same process will take place in agriculture, the energy sector, health care and the construction industry, as these sectors must also be opened up to digitalisation.

Digitalisation must be turned to the benefit of the public good, and the negative effects must be filtered out. In this effort, the main task is to ensure that no one misses out on the opportunities offered by digitalisation: these opportunities must be made available to every citizen. Speaking about the threats of digitalisation, the Prime Minister also said that an important part of Hungary’s digital strategy is child protection: efforts to protect children from dangerous and harmful content.

Mr. Orbán believes that there is a chance that the process of digitalisation will lead to at least as many jobs being created as are lost. For this to be realised, however, it is essential for the state, employers and employees to combine their efforts, he said.

The Prime Minister said that Hungary will assume presidency of the Visegrád countries in June 2017, and digitalisation will occupy a prominent position among the presidency’s priorities.

Mr. Orbán said that the primary reason for the success of East-Central Europe is that leaders in the region are willing to learn from each other: from the Poles they can learn about wise family policy and from the Czechs how to keep taxes low, while Slovakia was the first country in the region to introduce a proportionate, flat rate of taxation.