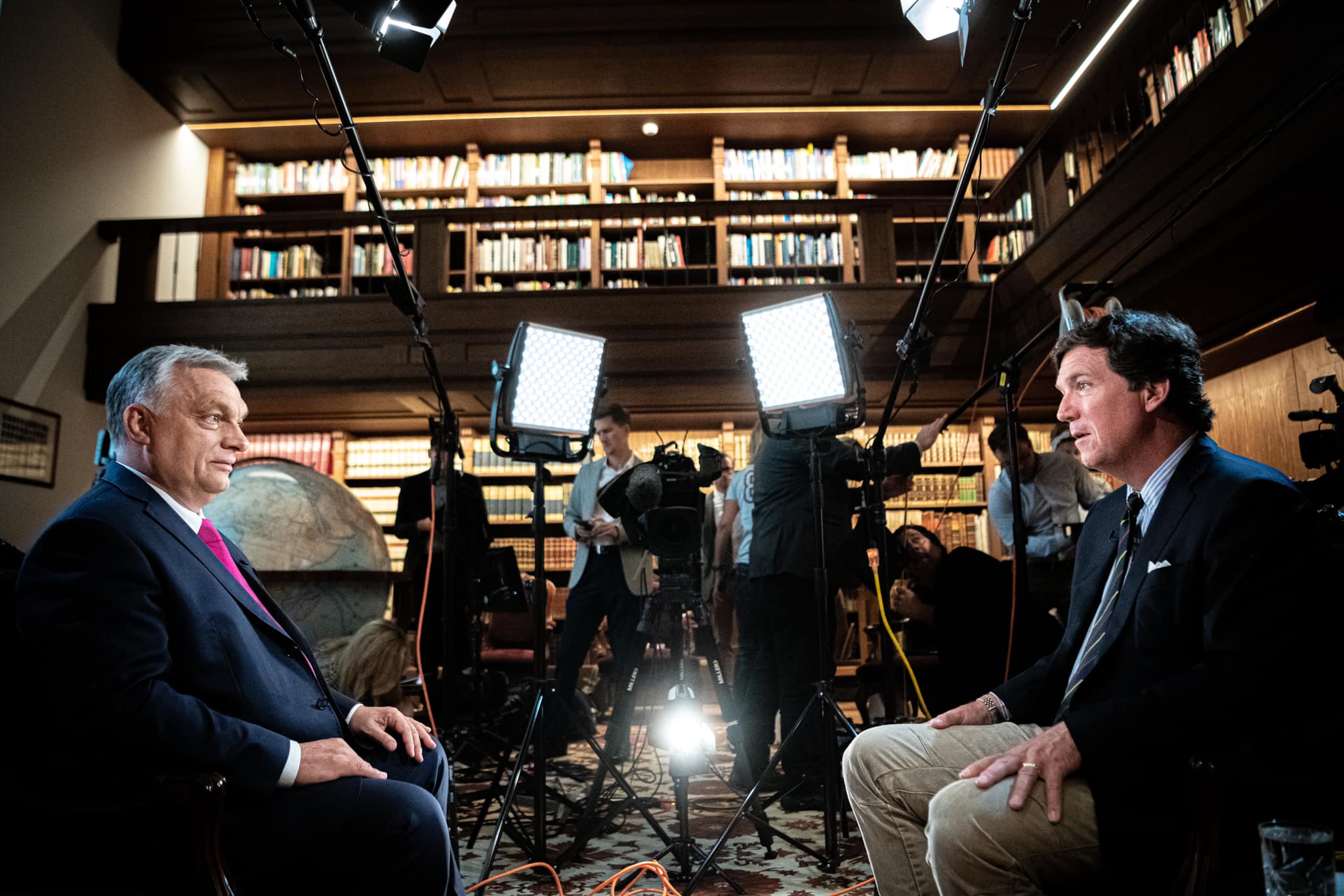 During the migrant crisis, the only reasonable decision for Hungary was to say no to immigration
06. 08. 2021.
| source: Cabinet Office Of The Prime Minister
During the 2015 migrant crisis, Hungary chose the only reasonable decision when, in contrast to the countries of Western Europe, it said no to immigration, Prime Minister Viktor Orbán stated in an interview broadcast on the US conservative television channel Fox News on Thursday evening, local time.

In his interview with Tucker Carlson, the channel’s host who is currently in Budapest, the Hungarian Prime Minister said if someone crosses the country’s border without the permission of the Hungarian State, we must defend ourselves and stop them. This is dangerous, and we must defend our own people from any danger. Mr Orbán added that Hungary has every right to so decide as “this is our country, this is our population, this is our history, this is our language”. There is no fundamental human right that would allow people to enter our country without permission, the Prime Minister added.

Mr Orbán said during the migrant crisis, several European countries decided to open a new chapter in their own history, a chapter they call ‘new society’. This new society is “post-Christian and post-national” in which different communities are mixed together, and there is no way of knowing what the consequences will be, the Prime Minister added. “I think this is very risky, and each nation has the right to take this risk or to reject this risk. We Hungarians decided not to take the risk of mixing up our society,” he said.

The Prime Minister added that Hungary is being attacked due to this decision, and this is also the reason why his personal reputation is as bad as it is. “I’m treated like the black sheep of the European Union,” he observed.

In answer to the question as to what the consequences were for Germany as a result of their decision to let migrants in, Mr Orbán said “diplomacy requires moderation, but this was their decision, they took the risk and now they got what they deserved”. The Prime Minister highlighted that he insists on the Hungarian people’s right to make their own choice regarding the issue of migration.

According to Mr Orbán, the liberals have a problem with the success of the Central European countries. “We are building a society that is equally successful economically, politically, culturally, and even in demography,” he said, adding that the countries of Central Europe achieved their results in a completely different manner than expected in Western societies. “Western liberals cannot accept that there is a conservative national alternative which is more successful at the level of daily life than the liberal one. That is the reason why they criticize us,” the Prime Minister said.

Regarding the fact that earlier US President Joe Biden described him as “a totalitarian thug” in an interview on the US television channel ABC News, Mr Orbán said “this is a personal insult for all the Hungarian people, but because he is the President of the United States, we have to be very modest and respectful”.

The Prime Minister added that they do not want to destroy bilateral relations between the United States and Hungary as “they are fundamentally very good”. “Everything is fine, except in politics. That is the problem when the liberals are in government in Washington, so we have to manage that because the good American-Hungarian relationship is a value, even if the Americans don’t perceive it today as they did before,” the Prime Minister said.

In the context of the fact that the American Left will support the opposition party alliance in the upcoming spring elections in Hungary, the Prime Minister said years ago he would not have thought that the “ex-communist political forces and the anti-Semite Right would form a coalition to run together in the elections”. Mr Orbán said he was surprised that the international community “accepted this so easily,” and he was especially surprised by the behaviour of the United States; this is “a totally new experience for me,” he said.

In answer to the question of whether he is concerned about possible international interference in the Hungarian elections, the Prime Minister said “we are not worried, we are prepared for that. Obviously, the international Left will do everything they can – probably even more – to change the government here in Hungary. But we are aware of that, and we are prepared for that – if they fight, we’ll fight back.”

In connection with Hungary’s foreign policy allies, the Prime Minister said the situation that Donald Trump is no longer President of the United States and Benjamin Netanyahu is no longer leader of the Israeli government is “a strong challenge” for him. “Hungarian Conservative-Christian – Judeo-Christian – democratic thinking has lost two major international supporters. Opponents came into power, and this is a totally new circumstance for Hungary,” Mr Orbán said.

Leading US conservative media personality Tucker Carlson will be in Hungary for several more days. The television host – who has been attacked by multiple members of the liberal press in recent days due to his visit to Hungary – will attend, among others, Mathias Corvinus Collegium’s (MCC) talent development event MCC Fest – We Give a Voice to Talent. On August 7, he will deliver an address in Esztergom, and together with his crew he will film a documentary about Hungary. Throughout this week, Mr Carlson will host his show on Fox News Channel from the Hungarian capital.