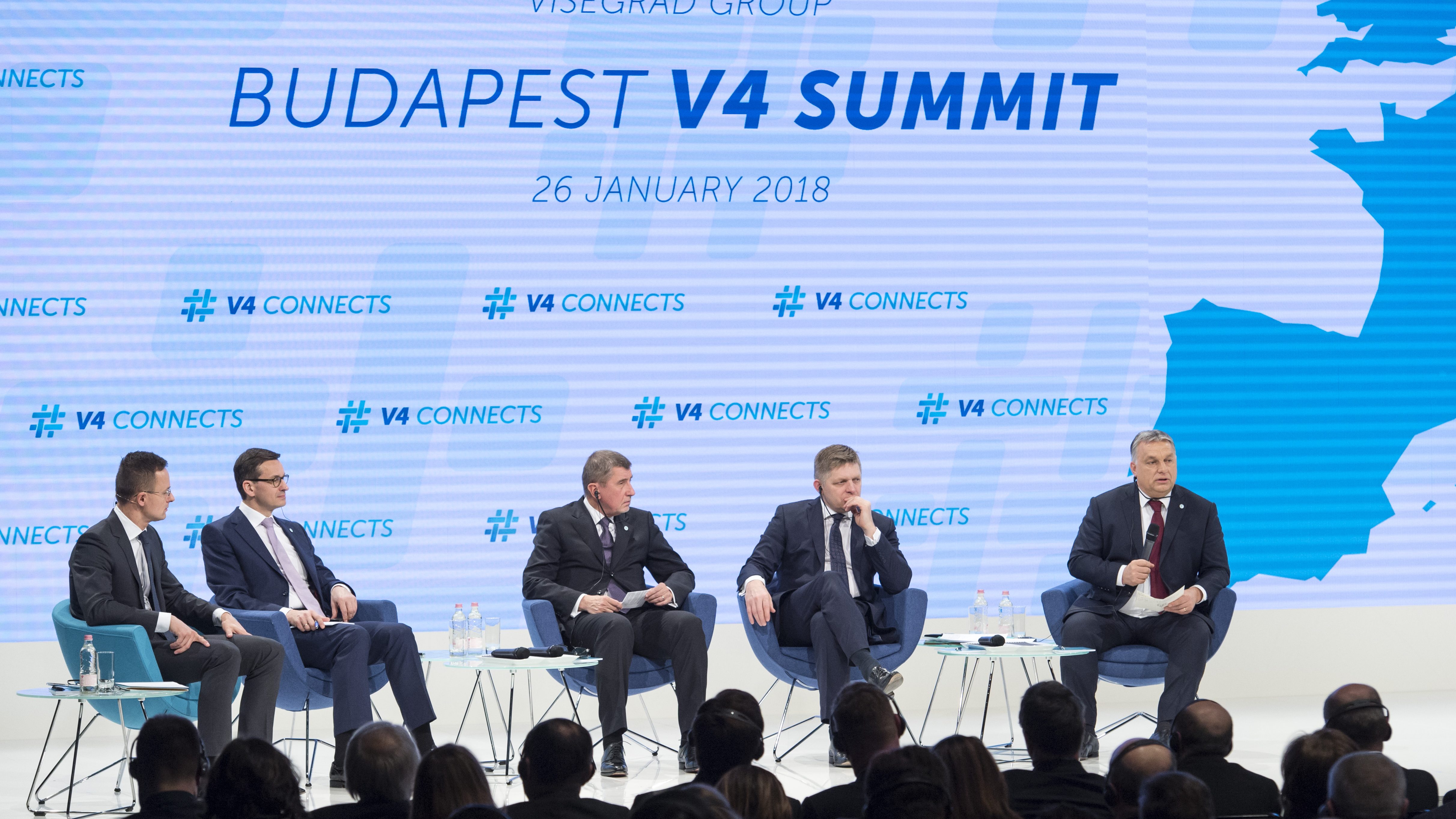 Europe needs to replan
27. 01. 2018.
| source: Cabinet Office of the Prime Minister
At a panel discussion following a summit of Visegrád Group (V4) heads of government, Prime Minister Viktor Orbán said that Europe needs to replan, because the goals that were previously set have not been realised. He went on to explain that the problem of immigration will not remain confined to Europe, it is becoming clear that the debate is moving from the European arena to the global arena, and this is something for which Europe also needs to provide an answer.

At the summit of heads of government of the V4 (the Czech Republic, Hungary, Poland and Slovakia) in Budapest on Friday, Mr. Orbán pointed out that as early as 2004, then UN Secretary General Kofi Annan called migration a solution, not a problem, and described what Europe should do, saying that channels must be opened for immigration.

Mr. Orbán stated that in 2015 Central Europe was faced with the dilemma of whether it wanted to set out on a new path, like the countries of Western Europe that accepted the advice of Kofi Annan. He observed that a few days ago the current UN Secretary General also declared that migration is a good thing, and the United Nations is assuming a role in the development of an agreement to distribute migrants worldwide.

“We are helping those whom we have to help, but we are not admitting migrants and we do not want to be an immigrant country”, the Prime Minister emphasised.

He explained that it is important for each of the Visegrád partners to state the views of their country, because to Hungary it is very clear that “we are not alone”, and Hungary’s way of thinking is not unique, but normal: a way of thinking guided by common sense.

According to Mr. Orbán, in the United Nations “dangerous things” are being prepared, with the planned global agreement including, for example, attempts to mandate the following: reductions in penalties for illegally crossing borders; NGOs being given a prominent role in handling migration; and the acceptance of migrants by all countries. He declared that “We do not support” any of this.

The Prime Minister said that this is about the protection of Christian culture. It is not a question of religion, he said, because this also affects non-believers, and includes: the Christian way of life; freedom of religion; the family model and the relationship between men and women; the fact that “we live here in an integrated manner and do not want to import anti-Semitism”; and the fact that “we insist on our tolerant, Christian way of life and refuse to give up the feeling of being at home”.

The Prime Minister asked who decided and who was asked about allowing foreign peoples into the continent, and who undertakes responsibility for this.

He explained that all this is happening against the wishes of the European people and without them being asked, while in Hungary the people were asked and action was taken according to their wishes.

Speaking about illegal migration, Mr. Orbán said that “If we are unable to stop it and allow the fence to be dismantled […] if we submit to the migrant quota […] then the optimism and the opportunity that is well within reach today will disappear”.

“Europe needs to replan, because the goals that were previously set have not been realised”, the Prime Minister said, adding that “We are pro-Europe politicians”.

The V4 does not diminish Europe’s strength, but adds to it

Mr. Orbán outlined the nature of the changes needed: the goal is for Europe to be stronger; the new plan must include a passage relating to a work-based society; Europe must regain its technological lead; it needs its own European defence force; and Europeans must talk about an alliance of free nations and not a United States of Europe. According to the Prime Minister, this is all possible – the only question is whether or not there will be leadership which is good enough to achieve these goals.

“The states of the V4 do not diminish Europe’s strength, but add to it”, the Prime Minister declared.

“The V4 is the fastest developing region in Europe”, Mr. Orbán stressed, also declaring that the V4 countries are not the recipients or supplicants for aid, but form an assertive community that gives at least as much to the EU as the other way around – with older EU Member States in fact “profiting from cooperation with us”.

He added that The V4 have a common vocabulary including words such as sovereignty, independence, freedom, God, patriotism, family, work, honour, security and common sense.

Now is the opportunity to lay Central Europe’s economic foundations

Mr. Orbán said that now is the time to establish Central Europe in an economic sense also, because this is when the required energy and resources are available to it. But, he explained, if people resign themselves to the fact that links in Europe will always be in an East-West direction, they are also accepting that there will never be a Central Europe – only Eastern Europe and Western Europe. Central Europe will only be created in an economic sense also if links are also realised in a North-South direction, he said, otherwise “we only remain friends”.

Mr. Orbán also highlighted the opportunity to enlarge the EU in the direction of the Western Balkans, explaining that if that region is successfully integrated, it will strengthen Central Europe.

With regard to EU integration, the Prime Minister said that the United States, Russia and Turkey all have strategies in relation to the Balkans, but only the EU has no strategy.

In reply to a question on Hungarian-Slovakian relations, Mr. Orbán said that what he had achieved with Robert Fico in recent years is also historically significant; the opportunity had always been available, but whether such opportunities are taken advantage of depends on the people involved.

The Prime Minister also praised Hungarian-Slovakian economic relations, explaining that the Slovakian-Hungarian natural gas pipeline represents a “life insurance for us”. In addition to this the parties also recently agreed on the construction of a new Danube bridge at Komárom/Komárno.

Military cooperation with the Czech Republic is moving forward well, he told the press, and in relation to Hungarian-Polish relations, plans for the construction of a Warsaw-Budapest high-speed rail line – which would reduce the current travel time of twelve hours to just four hours – are in the feasibility study phase.