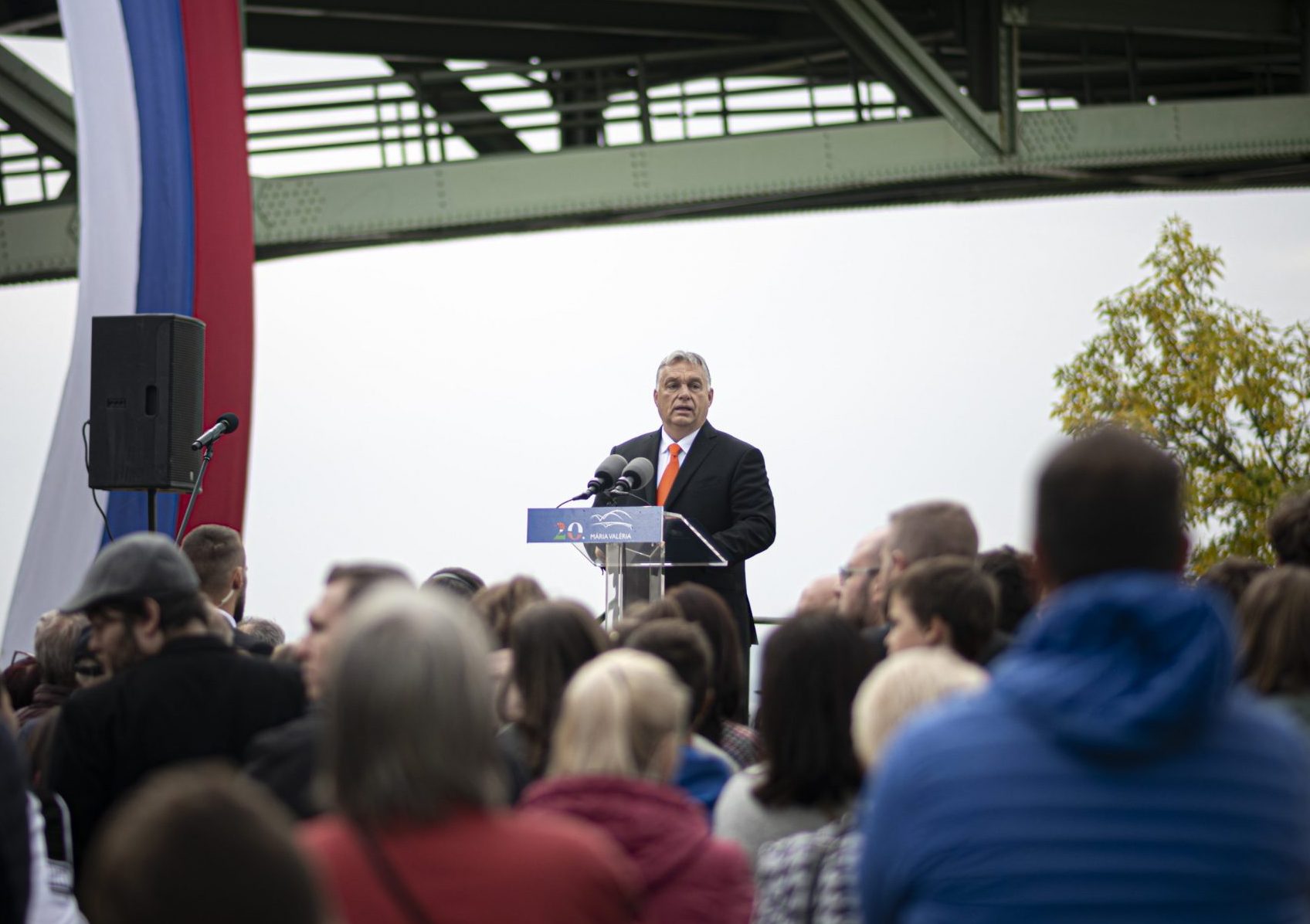 Forging alliances is the pledge of survival for peoples of Central Europe
12. 10. 2021.
| source: Cabinet Office Of The Prime Minister/MTI
Any kind of animosity among the peoples sharing the Central European fate is pointless, “the pledge of our survival is friendship and forging alliances,” Prime Minister Viktor Orbán said at the celebration held to commemorate the twentieth anniversary of the inauguration of the Marie Valerie Bridge on Monday in Esztergom.

In his address, the Prime Minister highlighted that “it is easy to realise at the border of two countries which suffered a cruel lesson in the aggression of the occupiers of the last century both individually and collectively that Slovaks and Hungarians are friends sharing a common fate, not enemies”. Clever neighbours do not wage wars against each other, and are not hostile to each other, he stated.

He added that there is no successful Hungary without a successful Slovakia, and this is also true the other way around.

Mr Orbán said today they are not inaugurating a bridge, but are commemorating a bridge inauguration that took place twenty years ago. However, this is more than a mere anniversary. In a bridge inauguration speech, it is possible to point out that a bridge connects people and countries together, and the pillars protruding from the water also symbolise the firmness of our faith in our common future. He himself said similar truths 20 years ago, he recalled.

He took the view that today we must say something more and in a different tone, today different winds are blowing, today we see the world differently. At the time, it had been just a decade since “we finally shook off the Soviet collar,” we were freshly admitted members of NATO, we were only three years away from the gate of European integration, he listed, adding that we hoped that all our problems would be solved with our accession to the EU.

He highlighted that that atmosphere had since flown away, had evaporated; we had to realise that we cannot trust our own future to the benevolence of external players. “Each and every day, we ourselves must fight for our own achievements,” he stated.

He observed that there are hardly any other two nations that view the world as similarly as Slovaks and Hungarians do. The only thing that actually separates us is language.

According to the Prime Minister, twenty years ago “even Brussels was on our side” and supported us, they also helped to rebuild this bridge. Today, however, they regard Central Europeans ever more frequently not as equal partners, but as second-class Member States, he laid down.

He said foreign great powers marched through Central Europe several times, those strangers always destroyed our bridges, and we always had to rebuild them time and again.

Mr Orbán stressed that the peoples and states of the region can only be successful if they cooperate. A successful Central Europe is only important for us, not for anyone else, and so those who argue against cooperation speak against themselves, he explained.

He said the two decades that have passed since the construction of the bridge have taught us that “it stands to reason for Hungary and Slovakia to move forward hand in hand”. This has already yielded the first tangible results, in the past decade the Visegrád Four (V4) have been able to grow continuously, he pointed out.

According to Mr Orbán, the V4 have built effective and stable cooperation, and have given common answers to civilisational crises. This was equally so during the financial, the migration and the coronavirus crises, he recalled.

The Prime Minister stated that 20 years after the rebuilding of the bridge, there is a Central European cooperation scheme which is stronger than ever. “We want to be good disciples of history; not only must we rebuild bridges, but we must also remember who destroyed them,” he said, adding that unless we do so, this will happen over and over again.

He highlighted that the Marie Valerie Bridge has remained a symbol, it conveys the message that “we are the future of Europe, and we must not allow the bridges that connect us together to be destroyed again”. Our fate continues to remain common, we have more tasks than ever, and our responsibility has increased, Mr Orbán said.