The Prime Minister is paying an official two-day visit to Georgia in the company of a business delegation and several of his ministers.

In a press statement after talks with his Georgian counterpart, Mr. Orbán highlighted that it is unparalleled for the excellent political relations between the two countries not to be reflected in trade and investment figures, and this must be changed.

The Prime Minister said that there are very few countries with which the Hungarians have had and continue to have such good relations. Efforts will be made to maintain this state of affairs in the future, as relations such as these have a special value. The Hungarians, he said, are a people that travelled from East to West, and they are proud of the scholarship with which their roots in the region have been researched. He added that Hungarians have knowledge of Georgia, they feel a link between the two nations based on their pride, insistence on independence, freedom of spirit and high level of culture, and this link can serve as a good basis for friendship.

At the same time, he explained, the situation is not quite as beneficial in terms of economic cooperation, and therefore the goal is to boost economic and trade relations, and to make good use of the available opportunities in order to turn “potential into reality”.

The Prime Minister noted that it is not easy to create good political relations which lay the foundations for economic cooperation, and therefore the excellent political relations must also be used for advantage in the economy. The Georgian prime minister, he said, had shown friendship and support in welcoming Hungary’s aim to achieve this.

He observed that the necessary funds have also been made available: Eximbank has opened a credit line worth USD 90 million for the promotion of trade relations, which can be replenished when spent.

Mr. Orbán reported that members of the business delegation were primarily interested in opportunities in the fields of water management, sewage treatment, agriculture, and the pharmaceutical, food and construction industries.

He also said that Hungary is open to Georgian students. He proposed that, as in Hungary there is also English-language secondary education in agriculture, Hungary is happy to welcome an unrestricted number of secondary school students.

The Prime Minister said that as the two countries’ intentions regarding cooperation with China coincide, he has invited the Georgian government to attend as an observer at the Central Europe-China summit in Hungary in September.

Mr. Orbán stated that Hungary has consistently supported the EU granting visa-free travel to Georgia, so that as soon as possible it can forge closer relations with the Union. The EU “is today not particularly enthusiastic about the idea of enlargement”, and therefore the Member States that joined later must maintain openness and must support countries which seek to gain admission to the EU, he said.

He added that Hungary greatly appreciates Georgia’s consistent foreign policy, it supports Georgia’s sovereignty and territorial integrity within the internationally recognised boundaries, and it is also committed to the successful negotiated resolution of frozen conflicts.

Georgian prime minister Giorgi Kvirikashvili stressed that for some years cooperation between Hungary and Georgia has been very good, and that political relations and the two countries’ joint actions at international forums are successful. The goal is now to expand economic cooperation, he said.

He pointed out that more and more Hungarian tourists are travelling to Georgia. At the same time, he said, exchange programmes provide a fine opportunity for Georgian students to receive quality education in Hungary. He added that at present 80 Georgian students have scholarships in Hungary.

The Georgian prime minister observed that his country has achieved much on the path towards EU membership, and greatly appreciates Hungary’s support. He takes the view that the granting of visa-free travel by the EU to Georgia will further boost the establishment of closer bilateral relations.

He said that he also spoke to his Hungarian partner about the territories occupied by Russia. Georgia is seeking to find a peaceful resolution to the conflict, and Hungary is also committed to a peaceful settlement, he said.

He noted that this year they are celebrating the 25th anniversary of the establishment of diplomatic relations between the two countries.

In a departure from the original plan, after the press statements the news agency AP asked Mr. Orbán questions about the Central European University (CEU). On this issue the Prime Minister said that “there is a lot of disinformation”: the CEU is not in danger, he said, and it is a university operating in Hungary which will continue to function properly in the future.

On Friday morning Mr. Orbán laid a wreath at the Memorial of Heroes, and in the afternoon he closed an all-day Hungarian-Georgian business forum together with Mr. Kvirikashvili.

Two groups of demonstrators numbering a few dozen people were present when the Hungarian prime minister arrived at the business forum. One of these groups was protesting in support of the CEU, while the other was protesting against Mr. Orbán and the policies of the Hungarian government.

The Hungarian prime minister was later scheduled to meet the Georgian head of state Giorgi Margvelashvili and Chairperson of the Parliament of Georgia Irakli Kobakhidze.

Press statement by Viktor Orbán after the NATO summit in Brussels 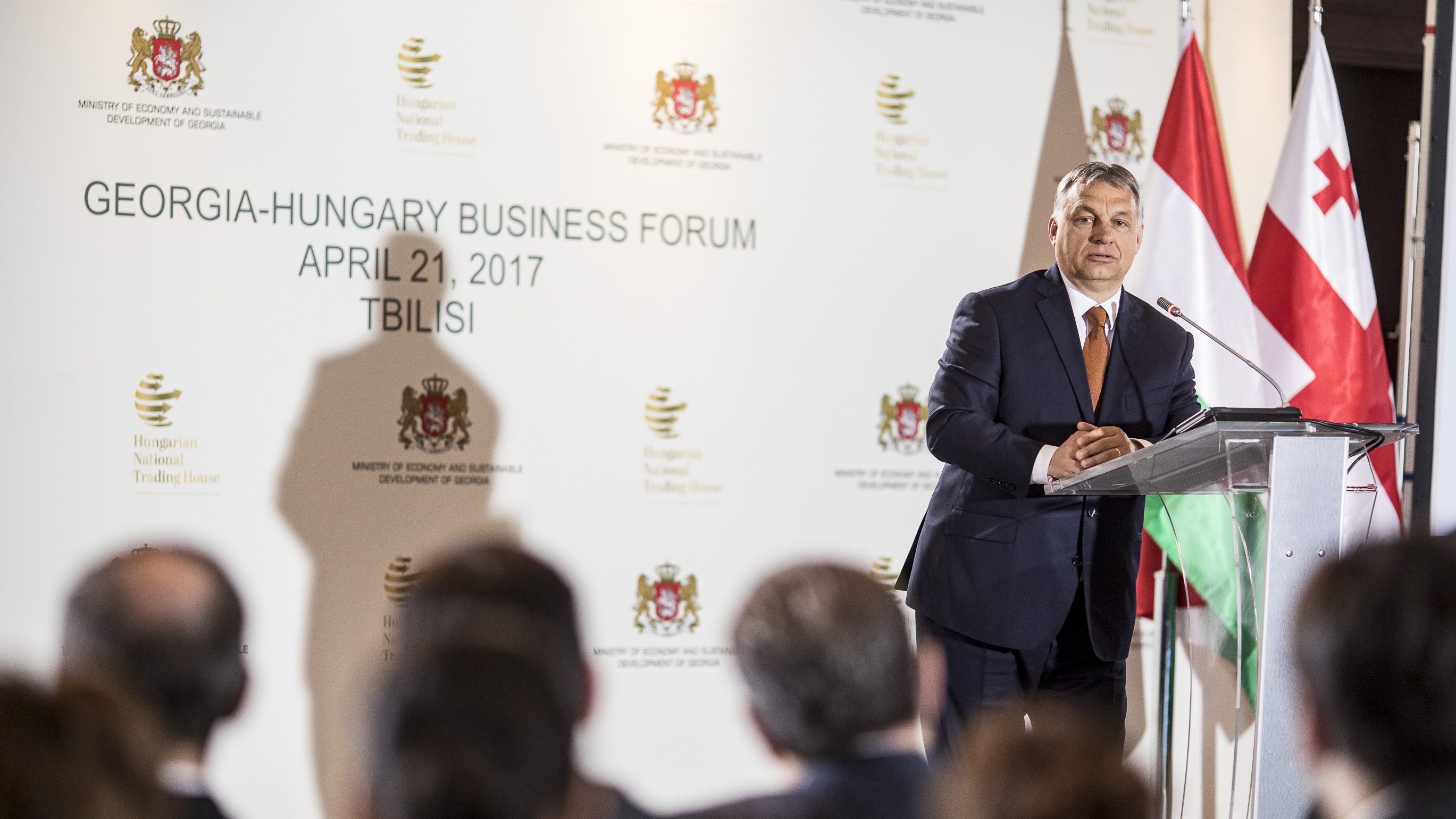