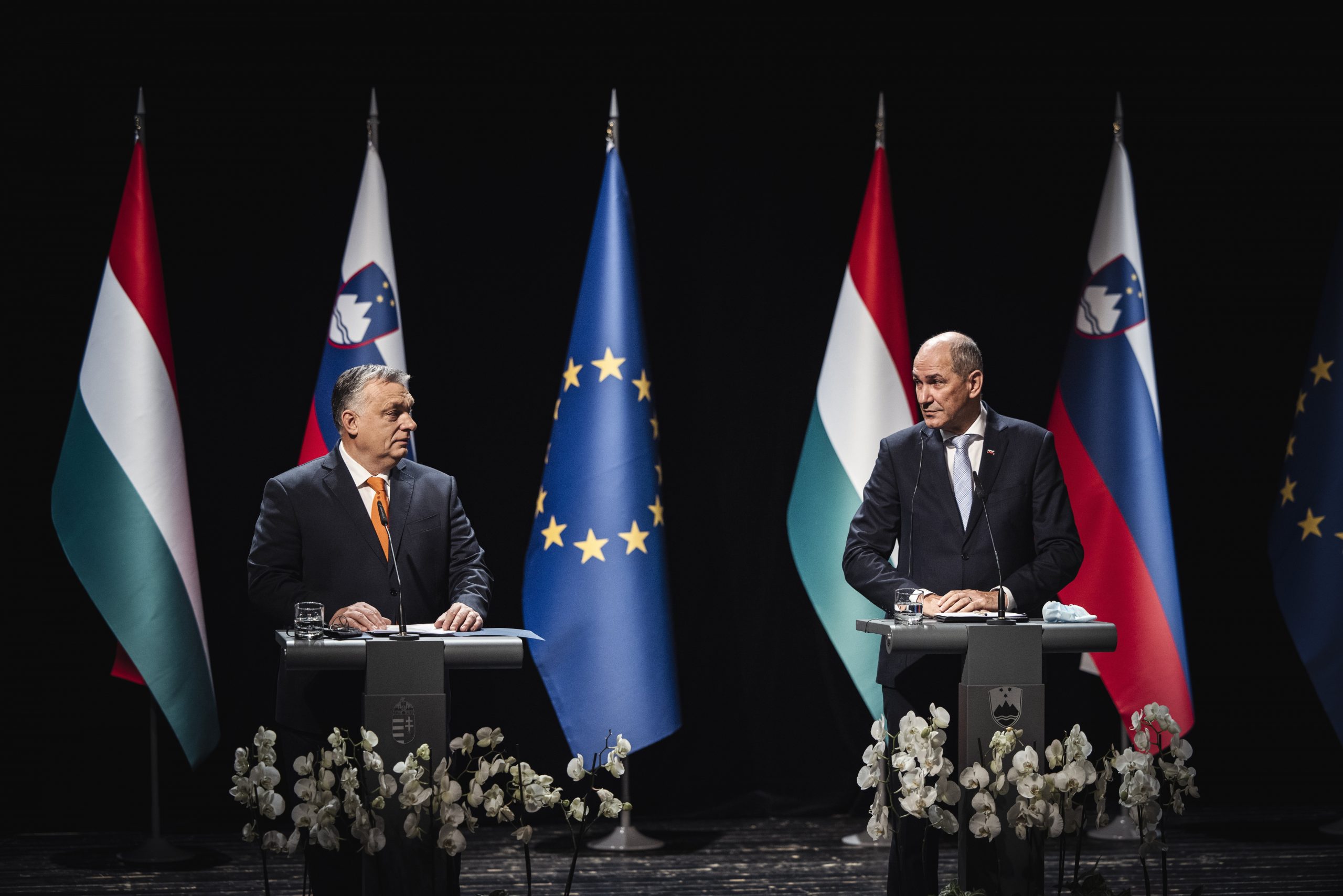 Hungarian and Slovenian economies came out of the crisis stronger
21. 02. 2022.
| source: Cabinet Office of the Prime Minister
The Hungarian and Slovenian economies are coming out of the crisis stronger than they were going in, and there are few such countries, Prime Minister Viktor Orbán said on Monday in Lendva (Lendava), Slovenia.

The Prime Minister had talks with his counterpart Slovenian Prime Minister Janez Jansa. At the meeting, they signed an agreement about the development of the Muravidék (Prekmurje) and Rábavidék regions.

At their joint press conference, Mr Orbán said while the pandemic took its toll on both Hungary and Slovenia, on the whole, both of them are amidst the ranks of countries that put up a successful fight against the pandemic.

Mr Orbán described the agreement they signed as important because in his view it is good not only for the people living in the regions, but for all Slovenians and all Hungarians because it strengthens the friendship and alliance between the two countries. “We’re living in times – and we will even more so in the future” when friendship is the most valuable currency, and sincere friendship and a shared fate in history the most precious commodities, he said.

He took the view that they will face many challenges in the future, including the Russian-Ukrainian conflict and the shift in the world economy in favour of the East and to the detriment of the West. “Together it will be easier to find the answers than one by one,” he stated.

He said we have become much more equal partners in the EU, as far as economic strength and dependence are concerned, compared with the past. This is why “Hungary stands up more bravely for its own truth, its own views, its own plans”. “We’re not troublemakers, we have simply become stronger, and we’re aware that our voice can be heard in Brussels at least as much as the voice of Western European countries,” he said.

He stressed that the more Central European countries cooperate, the stronger their voice will become.

He observed that April will be an interesting month because there will be four important weekends: Easter, the Hungarian elections, the Slovenian elections and the French elections.

The Prime Minister said Slovenians and Hungarians see the minorities living in their territories not as a source of conflict, but as a resource; these communities “add to our strength,” making Slovenia and Hungary stronger.

In answer to a question, he said the Slovenian EU presidency did everything it could during the second half of the year to warn the European Union in time that “an energy price rise that we’re not prepared for is knocking on our doors”. Other Central European countries, too, warned that this would lead to serious problems, he added.

He highlighted that it is not only that the price of energy has gone up, but that the European Union’s climate policy has failed. There was an envisaged very long-term climate policy which focused on how to continuously raise energy prices in order to induce people to use less energy, he said, adding that at the same time, they failed to integrate into pricing a defence mechanism against market speculation that would have restricted price rises.

He stated that we need a new plan because if they keep forcing the old one, the next step will be to increase the price of energy for cars and homes. “We will fight” to prevent this from happening, he said.

He recalled that in Hungary families are protected with the reduction of household energy prices. However, businesses are suffering from high energy prices because the Hungarian budget cannot afford to provide the same defence mechanism of fixed prices for companies.

Mr Orbán also said Slovenia can continue to rely on Hungary operating a friendly investor environment. At present, Hungary is the seventh largest investor in Slovenia, but “based on the weight of the Hungarian economy, we’d like to do better than that” and “we would like to move to third or fourth position,” he stated.

Regarding the situation in Ukraine, he said the goal is to prevent a war, meaning to maintain peace. “At the same time, good intentions are not enough for peace,” for peace it is not enough for one to declare one’s peaceful intentions, “for peace you need strength; there is no peace for the weak,” he stated.

He took the view that “in this we’re not doing well” because Europe has no military strength comparable with that of Russia, and as long as that is the case, “Europe’s security will be decided not by the Europeans, but by the Russians from one side and the Americans from the other,” he explained.

He said this is why Hungary supports European aspirations to create military cooperation among EU Member States, to develop the defence industry, and to build meaningful European defence capabilities in the interest of peace.

The Prime Minister stressed that Ukraine neighbours Hungary, and so if the situation there deteriorates, “Hungary will find itself under enormous pressure”. In the 1990s, during the Yugoslav Wars, refugees in the tens of thousands fled to Hungary, but as regards its population, Ukraine is much bigger than the former Yugoslavia was, and if there are problems there, the pressure of refugees on Hungary will have much more significant security and economic implications, he said.

In answer to a question concerning the upcoming elections, the Prime Minister said “we are preparing for victory,” “we have our arguments” for continued governance, and the political, economic and moral foundations also exist because in the past twelve years Hungary “has come a long way, moving, in fact, running forward,” and cuts a completely different figure than twelve years ago. “We asked for the Hungarian people’s trust with reference to that achievement,” he said.