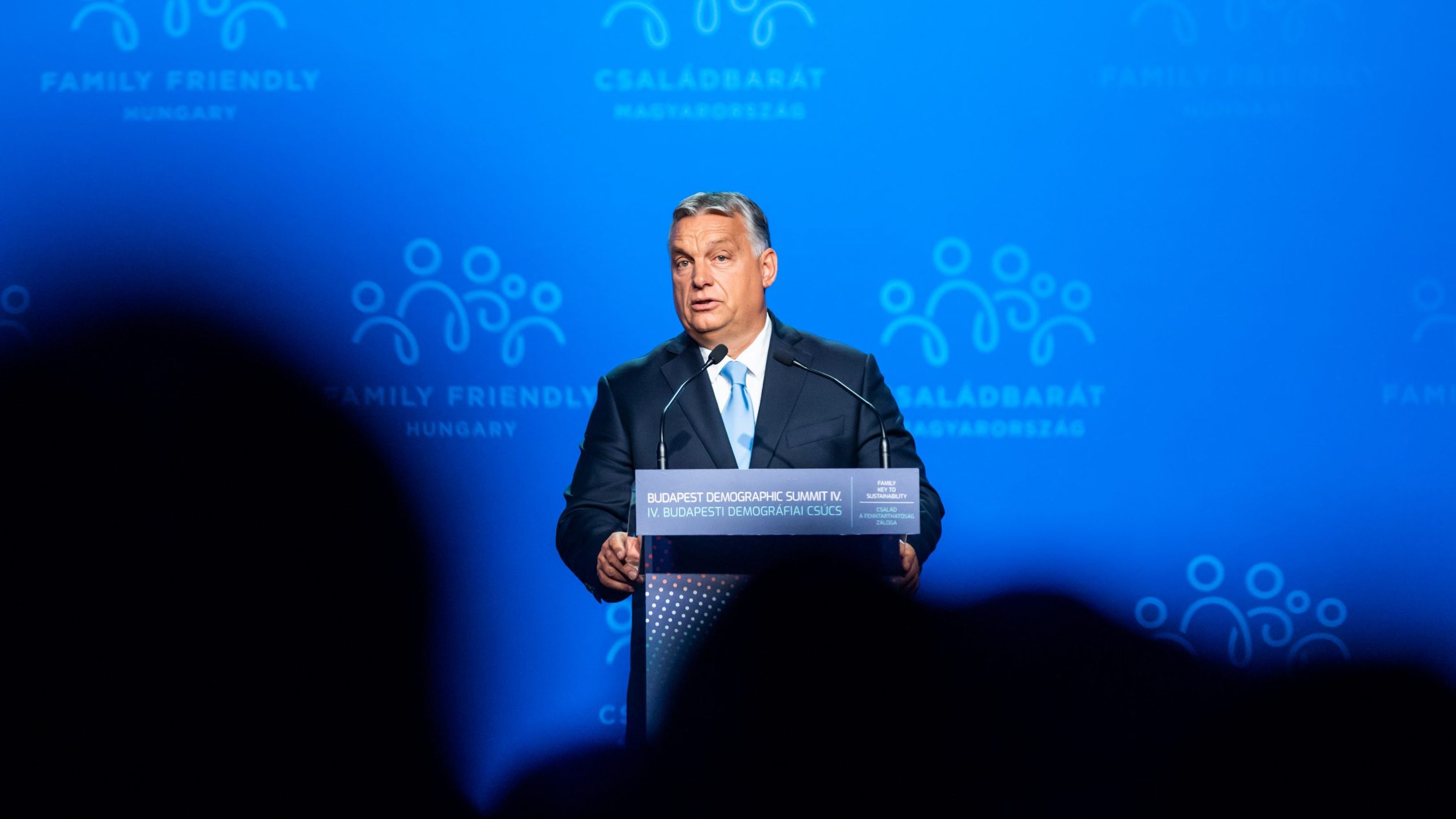 At the event held in the Castle Garden Bazaar, the Hungarian Prime Minister said as part of this, the decision to raise children must be made advantageous also financially, and families must be helped to homes they own.

Family policy must be based on the mother, and the functioning of the entire country must be made family-friendly. Additionally, the institution of the family and children must also be protected by means of the law, the Prime Minister added.

Mr Orbán said he is convinced that the only right and workable solution to the puzzle of population decline is for the State to help with the establishment of families and promote their advancement.

He took the view that it is easy to hand out money to families; it “doesn’t require a lot of brains”. However, he continued, families must be given support whilst maintaining the continuous growth of the economy. We spend 5 per cent of GDP on family support, we are not yet where we would like to be, we are around half way, but at least we already know the direction, he added.

He stated that if the new special Hungarian family policy had not been introduced and everything had remained the same, over ten years 120,000 fewer children would have been born. He added that since 2010 the number of marriages has almost doubled, and the number of abortions has fallen by 41 per cent in Hungary.

The Prime Minister observed that a conference such as this is a value choice in itself as not everyone shares the view that they should at all think about the shaping of demographic processes. “We are here, however, because rather than suffering demographic processes, we want to shape them,” he stressed.

In his view, some civilisations are able to reproduce themselves; the West is not one of them, “they simply don’t want to sustain themselves”.

He said there are some who believe that this is not a problem at all, while others believe that migration is the solution. However, the latter represents a global plan for the resettlement of a new working class, and those who see this as the solution fail to take the cultural aspect of demography into consideration, despite the fact that in Europe this is the most important dimension of migration, he added.

“Over here migration is an identity issue,” Mr Orbán stressed, highlighting that in Europe a country can only function if the people living there profess more or less the same values on the most important issues. If this is not the case, a country, a nation will inevitably fall apart, he stated. He pointed out that therefore in Europe solutions that are based on economic approaches are unworkable.

The Hungarian Prime Minister also said they observe with concern “the ever wider and faster spread” in the West of neo-Marxist, neo-leftist, woke movements which “seek to miseducate our children already in nursery school, want to use children as Pride activists,” and popularise gender reassignment among children.

At the same time, he warned that in Central Europe the situation is different. Over here, people are familiar with the nature of Marxist thinking as they had to live together with it for 40 years. “We are vaccinated against wokeism, our history protects us from the cultural Left like the vaccine protects us against the coronavirus,” he said.

He also drew attention to the fact that the Hungarians are defending themselves because the Western Left keep attacking: they attack the traditional family model by relativising the concept of the family. In his view, the LGBTQ lobby and gender propaganda are used as the means of these attacks. “They target our children, and so we must defend ourselves,” he stressed, indicating that Hungary has a constitutional family and child protection system which “automatically activates itself if it sees that families are in danger”.

The Prime Minister described the Constitution as the most important line of defence of the Hungarian family protection system, citing the provisions of the Fundamental Law relating to family, marriage and children. He stressed that while in Hungary national consultations and referenda have been held in order to reinforce this line of defence, in Western Europe and Brussels no one ever asked the people about LGBTQ propaganda or migration.

He highlighted that behind the government’s family policy, measures and constitutional line of defence, there is also a consideration of a spiritual or anthropological nature which serves as the basis of everything, namely that raising children is a source of joy

He recalled that the Holy Father, who visited Budapest two weeks ago, encouraged Hungary regarding its family policy. “He said we shouldn’t falter. We won’t give up, and we will fight the battle with Brussels about child protection. Hungarians don’t make empty promises. I myself can only say – instead of making promises – that here we are and we have no choice. We know what to do,” he stated.

At the beginning of his address, Mr Orbán welcomed attending former US Vice President Mike Pence, telling him that “we look forward to your return within the shortest possible time”. He also welcomed the Czech and Slovenian Prime Ministers whom he reminded that they are fighting together for the interests of Central Europe and the sovereignty of their countries; for Christian heritage and the security of the European people.

Welcoming the President of Serbia and the Serbian member of the Presidency of Bosnia and Herzegovina, Mr Orbán stated that the future of the Balkans will determine the future of Europe’s security, and therefore Brussels must be convinced that they abandon their policy of many centuries, as part of which they use the Balkans as a buffer zone in the interest of their own comfort and convenience.