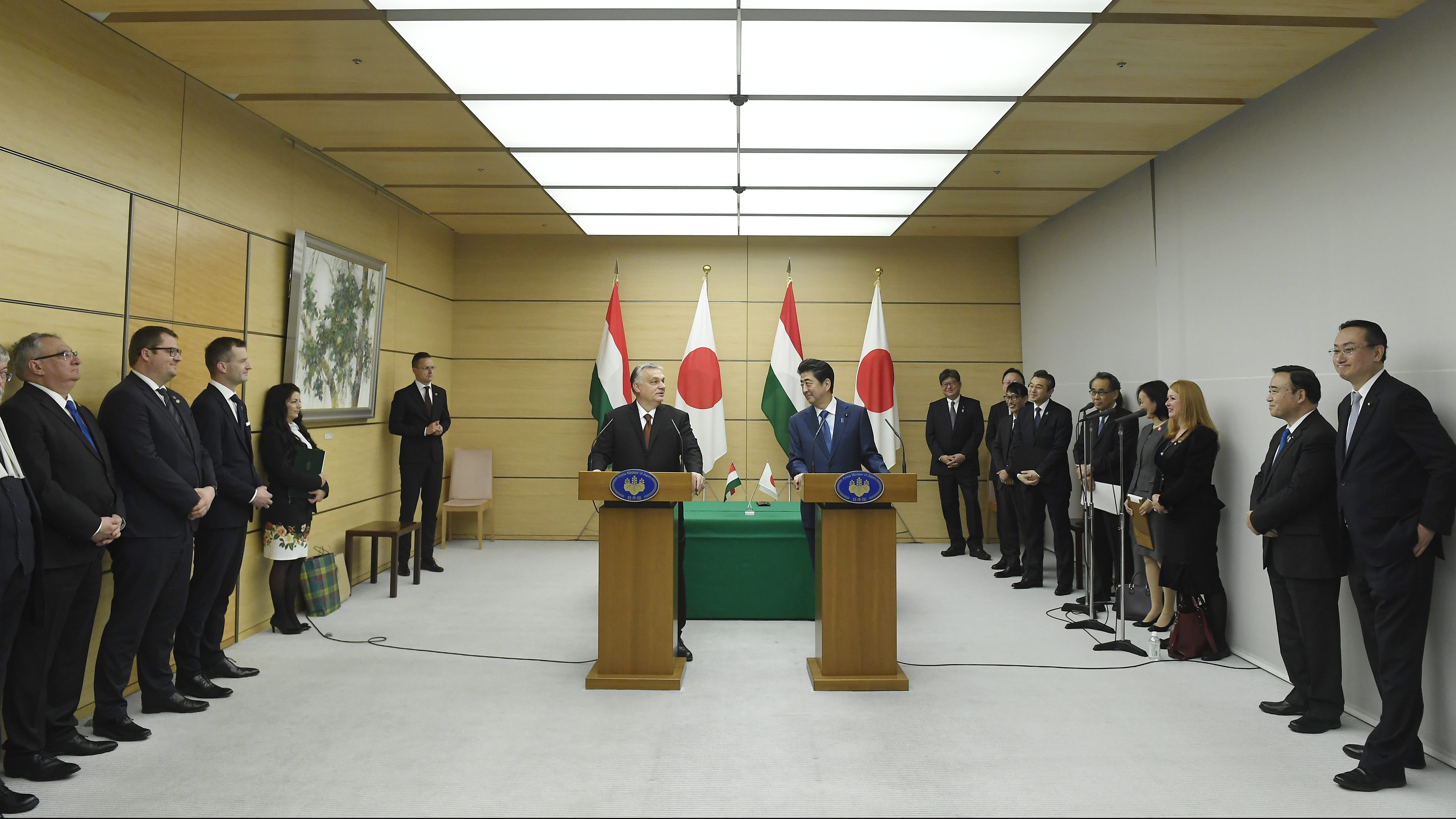 The Prime Minister had talks with his Japanese counterpart Shinzo Abe, and at their joint press conference he highlighted that Japan’s success is important for us because Japan is the largest Asian investor in Hungary. The more successful Japan will be, the more they will invest in Hungary, he pointed out.

He stressed that his Japanese counterpart reassured him that Japan, too, has a vested interest in Hungary’s success, and therefore supports modern Japanese technological investments in Hungary.

He said at the meeting they reviewed the most important issues of the world’s military, security and economic transformation.

He highlighted that Hungarian-Japanese relations are special, “they also have a spiritual content”. He recalled that in 1990 he was there in the Hungarian Parliament when Hungary had to be transformed, and the world in general was mistrustful. However, there was one country which “showed no lack of trust for a single minute”: It was Japan that did not immediately demand the repayment of its loans, brought developments to Hungary and helped the country to survive that difficult period, he pointed out. He added that the Hungarian people remember this and are grateful.

Mr Orbán also said “we hold Japanese culture and civilisation in high esteem” because “in the Hungarian people’s minds and souls, anything that is unique is always especially valuable”, and we regard Japanese culture as unique and unrepeatable.

The Prime Minister welcomed the fact that 600 young Japanese students study at Hungarian universities, including 400 medical students, and pointed out that the Hungarian State provides 100 scholarships so that young Japanese people come to Hungary to study.

Mr Orbán highlighted that there is one area in which there is keen competition between Japan and Hungary, and while this competition is peaceful, it is important that we have an advantage. This is the race for collecting Olympic gold medals, and while Hungary wishes all the very best with the Tokyo Olympic Games, we would like to win enough gold medals to ensure that Japan cannot catch up with us in this contest, he said.

The Prime Minister invited his Japanese counterpart for a visit to Budapest. There has not been a Japanese Prime Minister to Hungary since 1990, and it would be nice if we could celebrate the friendship of the two nations together there, he said.

Shinzo Abe said Japan would like to further expand its economic relations with Hungary and the country’s aspirations to promote industries with cutting-edge technologies and a high added value.

He highlighted that Hungary and Japan traditionally maintain good, friendly relations, in particular through cultural and academic activities, and in the 30 years since the fall of communism in Central Europe, the two countries’ economic relations, too, have developed significantly; Japan has become the largest Asian investor in Hungary.

He said at the meeting he agreed with Mr Orbán – who has maintained a stable government for a long time – that Japan would like to strengthen cooperation also in the fields of science and technology, and in this regard they would equally like to reinforce relations with members of the Visegrád Group, he said. He added that they encourage the development of relations in the areas of education, culture and sports as well.

The Japanese Prime Minister highlighted that they discussed the situation in Asia and Europe, and asked his Hungarian counterpart to ensure that his country acts as a bridge between the two continents.

Regarding the situation in North Korea, he confirmed that they closely cooperate in the interest of the country’s full nuclear disarmament.

He welcomed the fact that the Hungarian Prime Minister paid a visit to Tokyo in the year of the 150th anniversary of the establishment of Hungarian-Japanese diplomatic relations.

Before the press conference, the parties signed an agreement on the extension of the Stipendium Hungaricum agreement, an agreement on creating a Hungarian visiting lecturer position at the Josai International University, and an export credit insurance cooperation agreement.