Let us defend Hungary
13. 11. 2017.
| source: Cabinet Office of the Prime Minister/MTI
At the 27th Congress of Fidesz, Prime Minister Viktor Orbán said that Hungary will defend its borders, will prevent implementation of the “Soros Plan”, and in the end will win that battle.

The Prime Minister stressed that when Hungarians say “we must defend Hungary”, they are also saying that they must defend their work, their families, their security, their rule of law, their achievements, their Hungarian culture and their future.

In his words, the “Soros Empire” is threatening the country because Hungary stands in the way of a plan which seeks to eliminate nations and create a Europe with a mixed population. Therefore, Mr. Orbán said, in order to implement the Soros Plan efforts are being made to sweep away governments in Europe which represent national interests – including the Hungarian government.

He added that “George Soros’s NGOs” have penetrated all the influential forums for European decision-making. They are also present in the “backyards” of certain Hungarian parties, he said, operating like the activists from the Department for Agitation and Propaganda in the Soviet Communist Party of old. But, the Prime Minister said, “we old war horses recognise them by their smell”. The “Soros troops”, Mr. Orbán continued, want to tell others what to do, what to say, what to think – and even how to see themselves. For such people the world has no fixed points of reference: it is unclear who is a man and who is a woman, what family is, and what it means to be Hungarian and Christian. Mr. Orbán said that they are creating a “third gender”, ridiculing faith, and branding families as redundant and nations as obsolete.

Mr. Orbán said: “The Soros plan also seriously endangers the security of our everyday lives. In Europe’s immigrant countries acts of terrorism have become frequent, there are higher crime rates, violence against women has escalated, and anti-Semitism is emerging again. This is what we must prevent, and this is the threat that we must defend the country against.”

Mr. Orbán went on to say that his party is already prepared for the parliamentary election, stressing, however, that Fidesz is Fidesz because it is never satisfied with simply winning an election: “We want much more than that. We are also seeking to find, to discover – and if we perform well, no doubt we shall – the more profound meaning, the higher purpose in winning the next election. What must we do to ensure that a Fidesz victory means that Hungary and every Hungarian can be on the winning side?”

Mr. Orbán, who has been re-elected as the leader of Fidesz for another two years, outlined three tasks: to reinforce all that has been achieved in the past seven years; to strengthen the intellectual and spiritual foundations of their political beliefs; and to defend the future of Hungary, because “we have finally pulled ourselves together”. The Prime Minister said that in Hungary an economy on the verge of utter ruin needed to be rescued, and this has been successfully achieved with the combined efforts of all the country’s citizens. He highlighted the importance of results not only being seen in the economic figures, but being felt in changes to people’s everyday lives: everyone, he said, should be able to take a step forward every year.

He pointed out that those who are more successful need removal of unreasonable restrictions and bureaucratic obstacles; meanwhile, improving the economic situation of people who form the core of the national economy – those who are neither poor nor wealthy – is “a harder nut to crack”. They need to regain the jobs that have been taken from them, their faith in the meaning of work needs to be restored, and they need to make a decent living from the jobs they honestly perform, Mr. Orbán said. He added that for hundreds of thousands of people the path to advancement needs to be opened up, and results must be achieved in entire regions which have fallen behind.

Among the measures enacted in connection with these efforts, he mentioned the reduction in household utility charges, employment being offered instead of benefits, free meals provided for children and mandatory pre-school attendance from the age of three.

Everyone has received the opportunity to lead an honest, law-abiding life, he stressed, adding that those who fail to take this opportunity will find themselves subject to the full force of the law.

Listing further achievements of the Government, he mentioned the generous support provided for families with children – accompanied by repudiation of any way of life seeking to live off children, rather than for children. He also mentioned the elimination of long-term mass unemployment, tangibly rising wages and the “whipping into shape” of public security – for which he thinks Sándor Pintér could be given the title of “Europe’s best police officer and best Interior Minister”.

In his opinion, the current government should remain in office for at least another four years, in order to reinforce the results achieved to date, so that they become irreversible. Therefore, he said, the stakes in next year’s parliamentary election are higher than they were in 2014.

The Prime Minister stressed that the Hungarian people cannot rely on an opposition which failed to vote for the most important decisions, such as: family tax allowances, tax cuts, preferential retirement rights for women, the Land Act, the rescue package for foreign currency debtors, and the proposed amendment to the Constitution seeking to ban the relocation of migrants.

He said: “One can easily see that it is impossible to make security in everyday life enduring – let alone irreversible – with the collapsing socialists waist-deep in internal recriminations, or with other groupings willing to do anything for money and power, transformed from national radicals into a party of kitten cuddlers.”

Mr. Orbán called upon his audience to bear in mind that the spirit of the age is not the same as the prevailing media trend.

The spirit of the age, he stated, “is on our side: it is on the side of hard-working and responsible Europeans who provide for their families, love their homelands and insist on their Christian roots”.

The Prime Minister highlighted that, day in, day out, tens of millions of Europeans work and battle hard to keep themselves and their families afloat, they yearn for security and order, they cleave ever more firmly to their cultural identity, and they fight daily for every square metre of their normal European life. Such people are in the overwhelming majority, he added, and it is only a question of time before “we shall prevail” – not only in Hungary, but in the whole of Europe, and in the entire Western world.

Mr. Orbán said that there is a continuing struggle, which will lead to European debates over the next decade centring on identity: the identities of people, of peoples, of countries, and even of continents.

He added that our success depends on the quality and solidity of the intellectual foundations of our political beliefs.

The Prime Minister rejected an approach which would turn people against one another, stating that Fidesz and the Christian Democratic People’s Party stand on national foundations, and espouse the ideals of cooperation and peace.

He contrasted this with a new approach centred on “the individual who is wrenched out of their cultural, national, religious and gender identities, and reduced to the aggregation of their instincts”: the embodiment of “Homo brusselicus”. In Europe, he stated, this approach has always led to barbarism.

Mr. Orbán added that there are countries which are seeking to enter a “post-Christian and post-national” era, and, while there are different opinions on this matter, there will surely be no unity if we seek to impose our ways of thinking, interests and goals on one another.

Mr. Orbán said that European unity may survive if we accept one another’s differences, show mutual respect, and, instead of a “United States of Europe”, we create a free alliance of European nations.

The Prime Minister also observed that next spring will see the thirtieth anniversary of Fidesz unfurling its flag in ELTE University’s Bibó College. While many people smiled dismissively when they decided to become a party and run in the first free parliamentary election after the fall of communism, Mr. Orbán pointed out that they are here today, and together with their allies they are Central Europe’s biggest party and most successful political community. Emphasising the links between the party then and the party today, he said that they are like each other in the way that a thirty-year-old man is the same as his one-year-old self, or the way that a small stream is the same as the river it widens into over its long journey. He noted that they have grown from the party of a generation into a European people’s party.

He went on to say that the Hungarian electorate has voted Fidesz into government three times, and the party has repaid the voters’ trust. He mentioned the most significant government measures they have adopted, saying that over the past three decades they have accomplished great things. At the same time, the Prime Minister said, now is the time to be modest, because “we now have achievements which we can be modest about”. At the end of his speech he expressed his gratitude for being given the opportunity to be a part of such a “fantastic political community”. 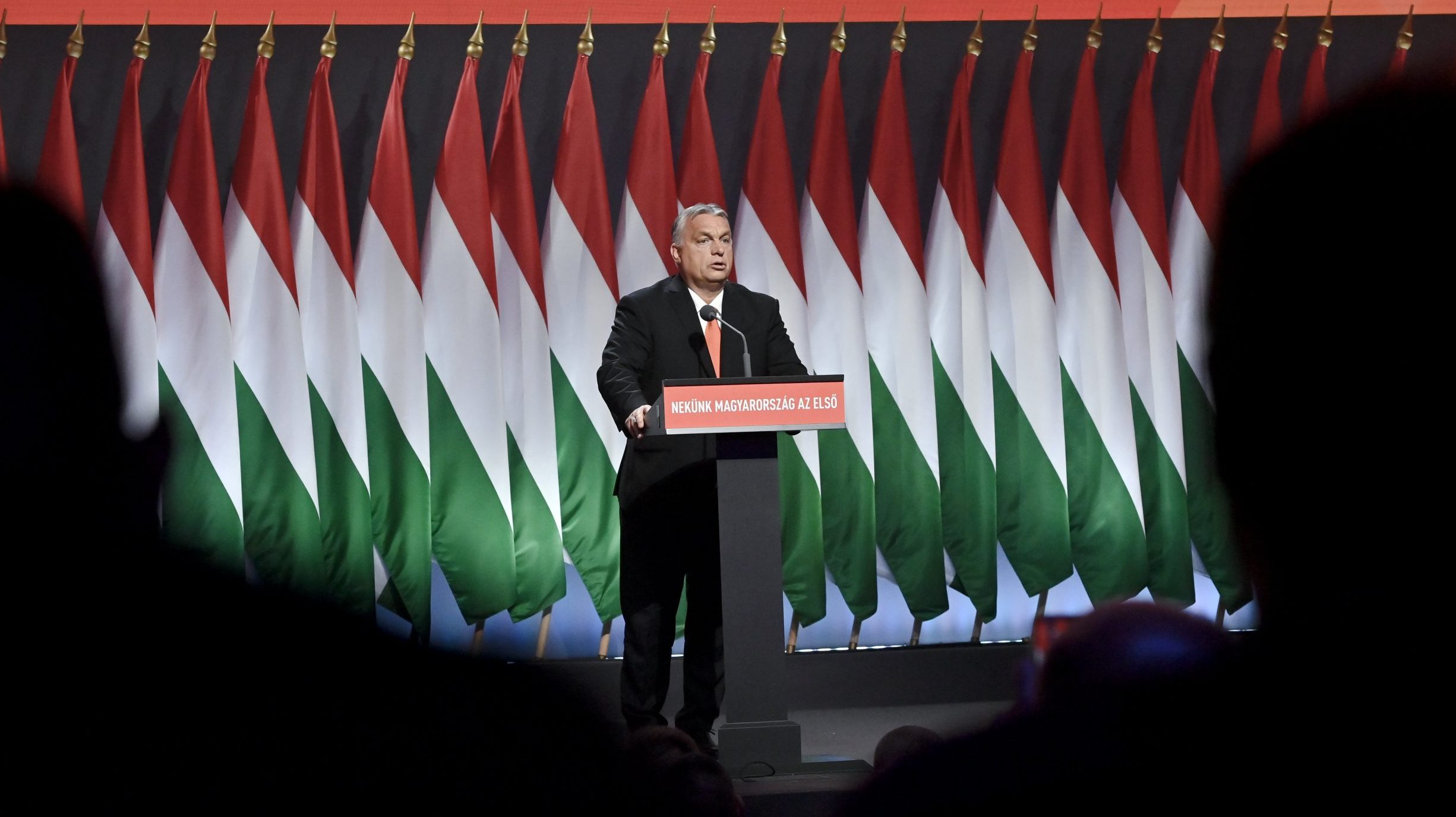