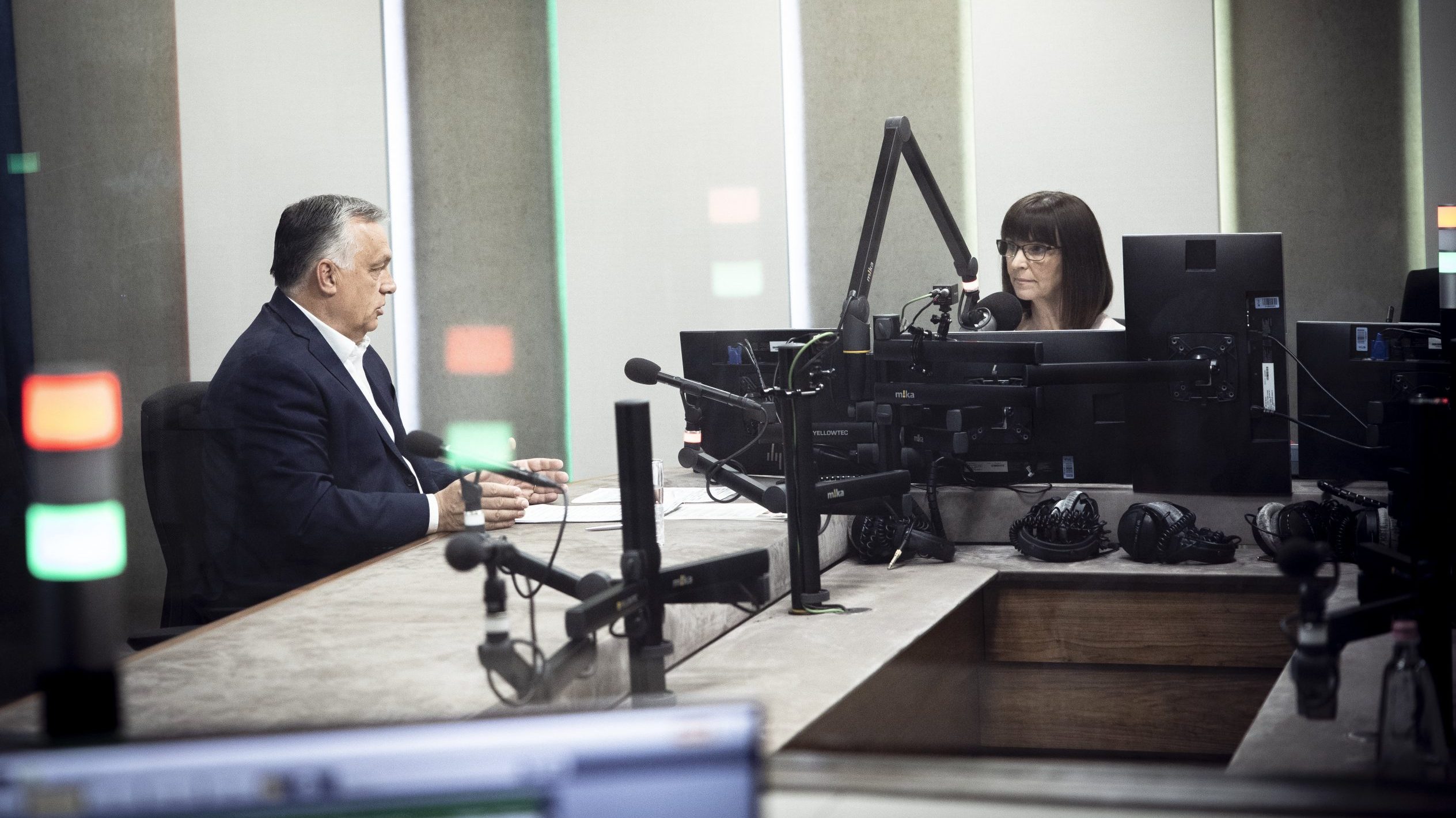 On Friday number of vaccinated persons will reach 5.5 million
02. 07. 2021.
| source: Cabinet Office Of The Prime Minister
On Friday, the number of vaccinated persons will reach 5.5 million, we will have that many people by this afternoon or evening, and then further restrictions will be lifted, including the requirement of wearing face masks, Prime Minister Viktor Orbán announced on Kossuth Radio’s programme ‘Good morning, Hungary’ where he also mentioned that the government had adopted multiple economic decisions, including the introduction of restrictions on the exportation of construction industry products from October and the levying of an extra profit tax on some construction materials in order to curb price rises.

He said, according to this morning’s report, in Hungary in the past 24 hours there has been no fatality in connection with the coronavirus epidemic, 76 persons who do not required assisted ventilation are being treated in hospital and there are 22 persons on ventilators. He also said the number of persons who have already received the second dose of the vaccine will reach five million on Friday or Saturday.

Regarding the lifting of restrictions, he said, among others, that with the exception of social institutions and hospitals, people will no longer be required to wear face masks in shops or on public transport. Naturally, those who believe that they will be safer can wear face masks, but this will no longer be mandatory, the Prime Minister indicated.

He also mentioned that people will be allowed to frequent catering establishments, hotels, leisure-time facilities and pre-booked, seated cultural events without the presentation of an immunity certificate. The restrictions relating to shops will be lifted, instead of 50 as many as 100 persons will be allowed to attend private events, while in the case of wedding receptions, the number of attendees will increase from 200 to 400, he said, adding that they will maintain “strictly and firmly” the requirement relating to the presentation of an immunity certificate in the case of three event types: sports events, music and dance events, and “concert-like events” held in indoor spaces.

Mr Orbán stressed that Hungary is fully prepared for a next, fourth wave of the epidemic. He repeatedly asked everyone to have themselves vaccinated because if they do so, they have a good chance of not falling ill in the fourth wave either. If, however, they do not have themselves vaccinated, they will realise that it is “nothing more than an illusion” that they can hide from the virus unvaccinated. Regarding a possible third dose of the vaccine, the Prime Minister asked for patience. In his opinion, the moment may come when experts take the view that it is possible to administer a third dose; however, at this time, this debate has not yet reached a conclusion.

In the Prime Minister’s opinion, the lifting of restrictions, the opening of the country can in itself boost the performance of the economy. At the same time, he warned that “the cogs are creaking,” and therefore he believes that the government will, from time to time, be required to adopt decisions that may appear unexpected and robust because if they merely allow the economy to restart on its own, it will be slow, the growth will be low and the incomes in people’s pockets will likewise be lower.

He announced that at its Thursday meeting the cabinet adopted proactive decisions intervening in the processes of the economy, including the imposition of a restriction on the exportation of construction industry products from October. He added that one of the reasons why the prices of construction materials have increased drastically is that the quantity of exports has risen.

He observed that this restriction must first be reported to Brussels and must be approved by the European Union; the notification process will take four months.

Until then, they will introduce mandatory reporting for exports and a pre-emptive right for the state, “we will try to keep the materials which are key for construction projects in Hungary,” he said.

He also said the government further decided on the extension of working from home, export credit insurance, the launch of job creation projects in 17 towns and the conclusion of three-year wage support agreements with the state railway company MÁV, the state coach company Volán, the postal service, the National Motorway Toll Service and the workers of the National Water Works.

The Prime Minister further announced that in the interest of curbing price rises, they will levy an extra profit tax on some construction materials. He said they will definitely introduce such a tax in the case of gravel and sharp sand, but they will explore the possibility in the case of other products as well. Explaining the reasons for this measure, he highlighted that in the case of some construction materials the extra profits realised have reached an unacceptable level, and so if the government experiences a sales price above a certain price level, they will take away 90 per cent of the price over that limit.

Mr Orbán also said they will introduce a rule where in the case of mines with awarded exploration rights which fail to start operations – thereby limiting supply – within one year of the granting of the concession, unless they start their activities, the concession will be revoked and awarded to someone else.

In response to a question relating to the fact that a “coordinated attack” was launched in the EU against Hungary in connection with the child protection legislation, Mr Orbán said “we’re used to this” as the same thing happened in the case of migration, the bank levy, the reduction of household utility bills and the extra tax levied on multinational companies as well.

He said “Without doubt, I had a tough evening and there were some harsh attacks as well, but I can reassure everyone that I gave as good as I got. While you’re not allowed to take in a pike, everyone got just what they deserved”.

He criticised the Dutch Prime Minister, describing his behaviour as “Übermensch conduct,” “colonialist conduct”. In his view, Mark Rutte is convinced that he stands on morally higher ground than the Hungarians, and therefore he has the right to tell them how the Hungarians should live, how they should think and how they should raise their children.

He said people in Western Europe decided that NGOs and organisations popularising LGBTQ lifestyles – meaning lifestyles departing from the conventional family model – are allowed to conduct sensitisation and sexual education campaigns in nursery and elementary schools. However, the other half of Europe says that “over here it’s different”.

He stressed that the law only applies to those under the age of 18; in their case, parents must decide whether they wish to expose their children to something like this.

Organisers of the Soros network have a vested interest, Mr Orbán said, in continually presenting Hungary in the most negative possible light, but there is no way of knowing whether behind this there are solely the economic interests and personal worldview of the Soros network, or equally the interests of “a large overseas country”. How “these enormous, gigantic US funds and foundations are linked to the American state” is a difficult question, in his view, that deserves our continuous attention.

“But whichever way it is, it doesn’t matter how they’re organised, I’m sure we’re better-organised than they are, we’re here, this is our home, this is our country, and here the Hungarian people will decide how to raise their children,” he stated.

He stressed that raising children is difficult, and additionally, it is the hardest in puberty when sexual behaviour and social behaviour develop. “Not everyone likes you, sometimes you find yourself disappointed, but the answer is not to encourage them to change sex. We must encourage them to try to live together with the physical and mental features that they have, and to so find their place in the adult world,” the Prime Minister said. In his view, this is a major challenge for parents and schools alike. We do not want anyone, other than ourselves, to interfere in this, he indicated.

Changing to the subject of migration, the Prime Minister offered his condolences to the Austrians for the fact that Afghan immigrants murdered a thirteen-year-old girl.

He highlighted that the German Chancellor is conducting an exemplary fight for the deportation of migrants let in illegally. However, this is a difficult situation because the perpetrators are from Afghanistan, the very country that the United States and NATO are in the process of withdrawing from. He warned that if, as a result, the situation in Afghanistan escalates, migrants in very large masses will set out for Europe.

Therefore, in the Prime Minister’s opinion, Hungary, too, should take on a role in the stabilisation of the situation in Afghanistan. He said as regards migration, the Hungarian nation’s “first line of defence” lies in the very territories from which migrants set out. In the case of Africa, it is Mali, while elsewhere this line extends from Syria all the way to Afghanistan.

He pointed out that while last year some 10,000 illegal migrants attempted to enter Hungary in total, so far this year as many as 38,000 have done so.

This means that the pressure on the borders has multiplied, and this will continue. Therefore, we must prepare “to have to live together with a more intense migration pressure” than during the pandemic, he warned.

He stressed that the government had launched a national consultation because they would like to reach an agreement among the Hungarian people about what they should prepare for.

In his view, we will have a period of pandemics and mass migration waves; the world we will be living in will be more dangerous than that we have been used to.

“We must accept this, we can’t bury our heads in the sand, we must prepare for an era of threats, and must reinforce Hungary on the very points where the questions of the national consultation lie,” the Prime Minister stated.

He indicated that he would like to receive confirmation in the consultation about whether Hungary should continue to firmly stand up for its position rejecting the resettlement of migrants.