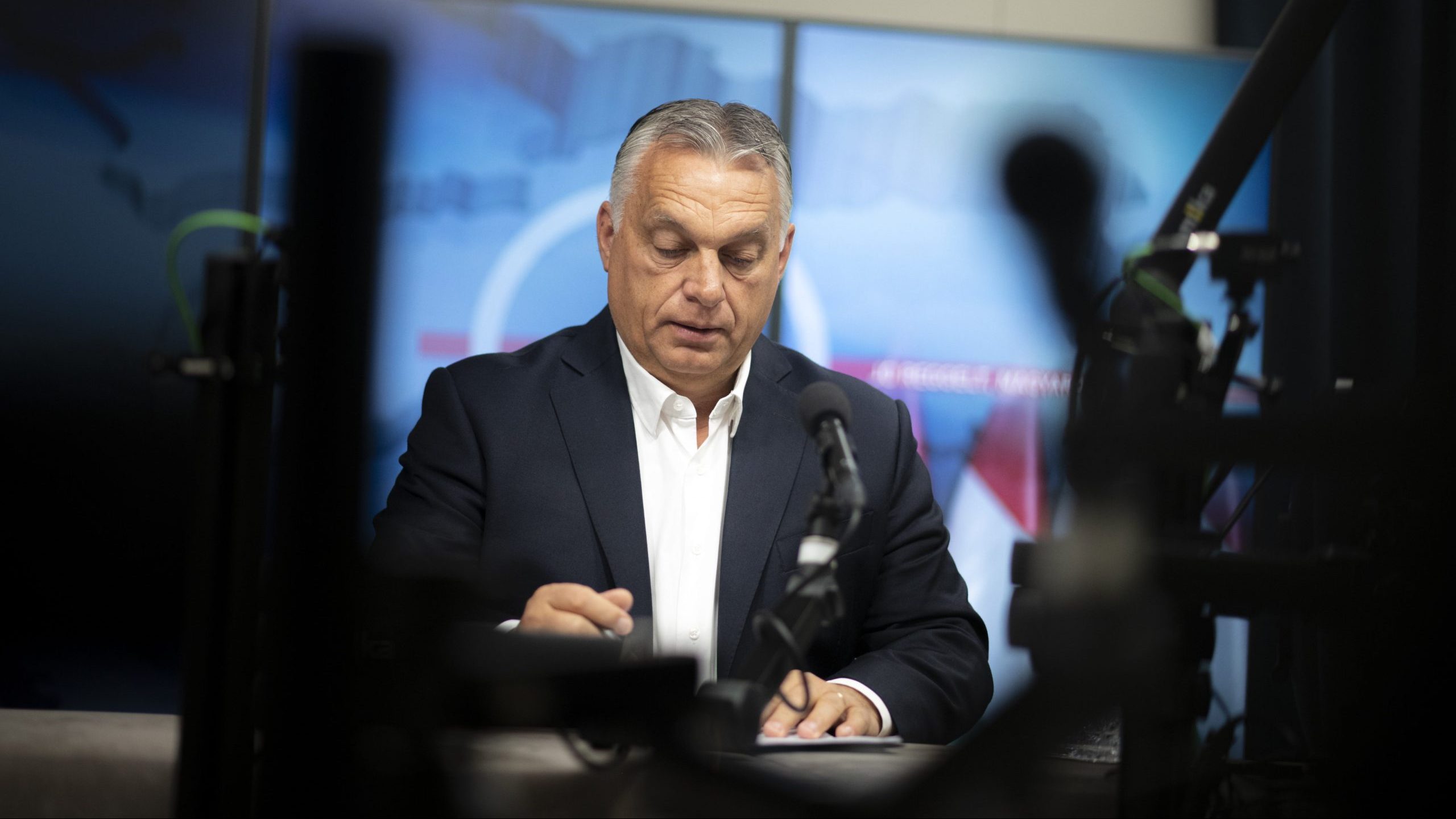 Only the vaccine provides protection
05. 11. 2021.
| source: Cabinet Office of the Prime Minister/MTI
No protective measure of any kind protects anyone from infection, only the vaccine does, Prime Minister Viktor Orbán stated on Kossuth Radio’s programme ‘Good morning, Hungary’ on Friday.

The Prime Minister said the delta variant of the coronavirus is spreading faster and is causing more severe illness.

Mr Orbán said until everyone is vaccinated, this virus will continue to infect people; less than one per cent of those who have been vaccinated fall ill, and the unvaccinated have a ten-fold risk of falling ill. He added that in some cases vaccinated individuals might also contract the coronavirus, but among them the percentage of those who become seriously ill is “much-much lower” than among the unvaccinated.

He stressed that the protective measures now in place, such as the use of face masks, only slow down the spread of the virus, but provide no protection. “Therefore, we mustn’t delude ourselves into believing that if we isolate ourselves, if we separate ourselves, if we put a face mask on, then we’re protected; we’re not protected, only the vaccine provides protection,” he stated.

He said up to the end of the year around 15 million doses of the vaccine will be available in Hungary. He indicated that the epidemic is not spreading uniformly in every part of the country, this is why they have involved employers in the defence effort, giving them the possibility to order mandatory vaccination or to send workers who are not willing to have themselves vaccinated on unpaid leave.

The Prime Minister admitted that this is “a measure provoking a major debate”. He observed at the same time that ordering general mandatory vaccination is “beyond the limit that Hungarians would accept”. They, however, accept that their immediate work community decide on this issue.

The Prime Minister announced that in the case of state workers who come into contact with many people, such as customer service employees, they have decided with immediate effect to send those who are not willing to have themselves vaccinated on unpaid leave. He added that after this, they will proceed “inwards” and as a result, sooner or later, the turn of all state workers will come, and they will have to face the dilemma that either they have themselves vaccinated or go on unpaid leave.

Regarding household energy costs, the Prime Minister said the Left made it clear: if they win, they will raise the prices of electricity and gas to the market level.

The Prime Minister said the position of the Left is clear: if prices on the market increase, the people, too, should pay more. The national government fixed prices for households in the interest of families and pensioners. In the past few months, the prices of electricity and gas have doubled or even tripled in Europe in vain; in Hungary, household utility charges will not increase. As long as a national government governs the country, this will be so, Mr Orbán stressed.

The Prime Minister said it is “foolish” that while prices are rising, Brussels has come up with an initiative in the guise of climate protection which will further increase prices. Governments have scope for manoeuvre, it is possible to protect the climate in such a way that the companies responsible for the pollution and destruction of our climate are made to pay the price, not the people, he laid down.

In his view, today the biggest battle in Brussels revolves around this issue: rich Western Europeans want to levy taxes on homes and vehicles, and Central Europeans resist this. He indicated that the next summit of prime ministers will be held in December, and there the main question will be who will gain the upper hand.

The Prime Minister described the raising of the minimum wage to HUF 200,000 as a major step, adding that he does not know whether there is an example in international practice of a raise of 20 per cent in one year. He said to this end, the government agreed with employers on a significant tax reduction.

He highlighted that ten years ago when the Gyurcsány-Bajnai Governments were in office, in Hungary the average wage amounted to that which will be now, 10 years later, the minimum wage.

Regarding migration, the Prime Minister drew attention to the fact that in the six years since 2015, in addition to Hungary, fences have been built by Greece, Spain, Bulgaria, Slovenia, Estonia, Lithuania, Latvia and Poland, meaning that the Hungarian position that was “solo” back in 2015 is slowly becoming the majority position in Europe.

He highlighted that up to October this year, the Hungarian authorities have foiled 92,000 illegal border-crossing attempts, and this means that the intensity of the pressure of migration has tripled or even quadrupled compared with the numbers in the year before.

He also said Hungary has so far spent around as much – almost HUF 600 billion – on border protection as the amount that the government will repay next year in the form of tax refunds to families raising children. Therefore, in his view, it is a legitimate demand on the part of Hungary that the EU should pay at least a part of this sum.

Mr Orbán warned that migration boosts the spread of the epidemic, and illegal migrants introduce infections to Hungary.

He stated that Hungary is ready to open a corridor via which migrants “can march all the way to Austria, Germany and Sweden,” but rejects Brussels’ efforts to force its own opinion on Hungary.

We Hungarians will decide what is good for Hungary, who is allowed to enter the country, whom we want to live together with, he stated.

In his view, this debate will remain with us for years because we are living in an era of epidemics and migration. He wished for Hungary to have a government at all times which does not yield an inch on this issue, and consistently enforces Hungarian national interests against Brussels bureaucrats.