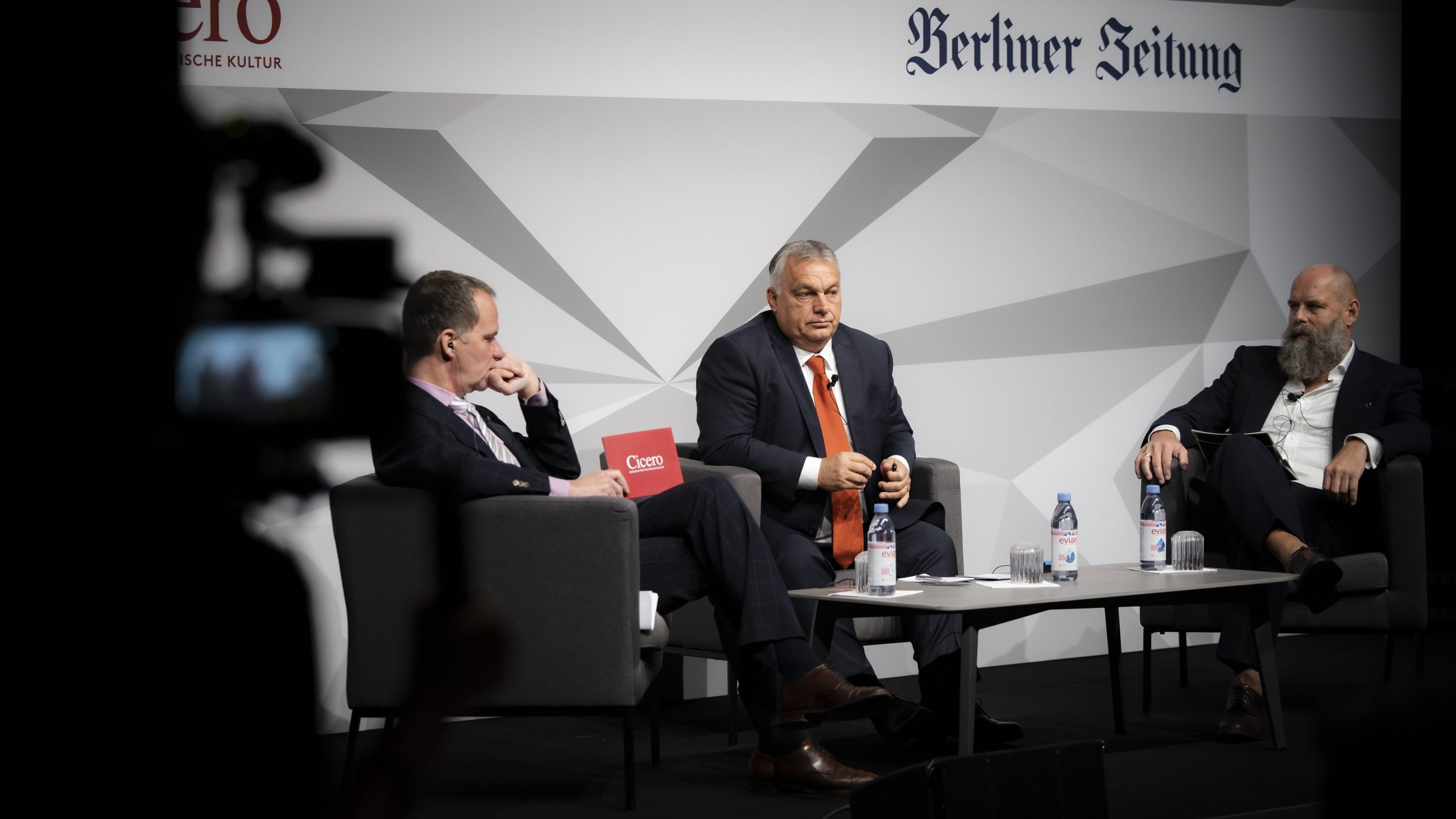 Policy of sanctions is primitive and disastrous
13. 10. 2022.
| source: Cabinet Office Of The Prime Minister
The European Union’s policy of sanctions against Russia is primitive in its implementation and disastrous in its impact, Prime Minister Viktor Orbán said on Tuesday at a stage discussion he had in Berlin with the editor-in-chief of the political magazine Cicero and the owner of the publishing company of the newspaper Berliner Zeitung.

Talking to Alexander Marquier and Holger Friedrich, the Prime Minister stressed that with the sanctions against Russia the Brussels European Commission had built up “a system implemented in an extremely primitive manner.”

Brussels’ sanctions policy “neglects European interests” and “destroys” the German and Hungarian economies, whilst helping Moscow to earn in just half a year as much money with the sale of energy carriers as earlier during an entire year, Mr Orbán argued.

He underlined that he objected not only to the means itself, the policy of sanctions, but also to its implementation. He said sanctions should only be imposed “in an intelligent manner,” and only from the position of the stronger party.

Only a stronger player is able to force a change with sanctions from another, weaker player. However, with the policy of Brussels a situation has emerged in which “a dwarf imposes sanctions on a giant,” and “this kills the dwarf,” he stressed, adding that this policy must be reconsidered, the punitive measures introduced against Russia due to the war in Ukraine “must be re-carved”.

“Had we done the sanctions well, energy prices wouldn’t be sky-high,” the Prime Minister underlined, highlighting that “you can impose sanctions by not destroying ourselves on the side of energy in the meantime, but the Commission was unable to achieve that”.

Therefore, when it comes to sanctions, “I am compelled to say that I have a problem, and […] if you don’t help me solve it, I’ll exercise my veto,” because “we can’t have a situation where you just kick the Hungarians off to the side,” Mr Orbán said.

He also said there was no way of knowing whether Russia would resume energy supplies, in particular, amidst circumstances when “certain groups are detonating pipelines with terrorist attacks,” in consequence of which they would not be able to supply energy even if they wanted to.

He said “we are very concerned that the only remaining high-volume pipeline – TurkStream – could meet with the same fate”.

Looking at the situation from a longer-term perspective, “it is not in Europe’s best interest to replace Russian energy dependence with American energy dependence,” which “may well be politically more convenient because in contrast to the Russians, the Americans are democrats,” but “it is not good” because Europe as a buyer has a vested interest in “there being four to five offers on the table” from among which it is possible to choose on the basis of economic or political considerations.

“We don’t want a change of masters, we want independence,” Mr Orbán stated, underlining that we want to create a situation in which Europe is able to choose from multiple alternatives, meaning that it is able to buy energy from America, Algeria, Qatar or Russia, for that matter.

The problem is not with Russian gas and Russian oil, but that “there is no other, and so we’re exposed”. As a result, “the question is not whether the Russians will be able to supply, but from how many places we’ll be able to buy and to make energy supplier partners compete to give us the best offers,” the Prime Minister stated.