We know the stations. We also know the painful stations of the Hungarian Calvary in Sátoraljaújhely.

Yet we walk the Way of the Cross again. We seek remedy, comfort, hope and encouragement. We know that we can only get it at the end of the Way. Only here and so can we rise above the pain.

Kassa to the right, Szatmárnémeti to the other side, behind us Munkács.

If we look not with our eyes but with our hearts, we can see even farther. Back, to the beginning of time.

We see hundreds of wandering tribes of the great steppe disappear and perish in the dust of history. We see that we Hungarians have neither disappeared nor perished, but have established our homeland in the ring of Latin, Germanic and Slavic peoples, preserving our unique quality. We opened our hearts to Christianity, heard the word of God, heeded it, and made it the foundation of our state. As it is written, “Remember that all men are born in the same state, and that nothing lifts you up, only humility, and nothing pulls you down, only pride and hatred.” Our country is standing on this foundation to this day.

We fended off the attacks of Western empires one after the other. The recovered from the devastating blows of the Eastern pagans. We did what the other peoples of the steppe could not. We fought, we organised, we adapted and we kept our place in Europe.

For four hundred years, the time equivalent of four Trianons, Hungary was a strong and independent state.

Then for three hundred years, for three Trianons, we fought against the Ottoman Empire. Deep down, on the Balkans, then at our southern ends, and finally in the heart of the Carpathian Basin. And although Buda was in Turkish hands for a time of one and a half Trianons, they could not march through us.

Then, after two hundred years, two Trianons of failed uprisings and freedom fights, we entered the gate of the twentieth century as a partner nation of a great European empire.

Although hundreds of thousands of Hungarians fell on the battlefields over the centuries, the whole world could see that neither the bullet nor the sword could break the Hungarian nation. Even if we are struck down, we stand up again and again.

We just came by the Square of Hungarian Mothers. In the Hungarian Calvary, women have a special place. This is rightly so because women have always made up for our losses.
At times they gave soldiers to defend the nation, at other times they gave armies of nation-building craftsmen to the country. They always gave what we needed. We owe it to our women that the art of survival and nation-building is in our genes. We owe it to them that we are the European champions of survival. Glory to the Hungarian women!

We didn’t become a German province, nor a Turkish vilayet, nor a Soviet republic.

The indelible evidence, churches and cathedrals, cities and town squares still stand everywhere today. They proclaim that we Hungarians are a great, culture-building and state-organising nation.

Finally, the thousand-year-old historical Hungary was stabbed in the back by the conspiracies in Budapest. His army was paralyzed and disbanded, the only statesman capable of rescuing the nation was assassinated, the country was handed over to our enemies, the government to the Bolsheviks.

The West raped the thousand-year-old borders and history of Central Europe. They forced us to live between indefensible borders, deprived us of our natural treasures, separated us from our resources, and made a death row out of our country. Central Europe was redrawn without moral concerns, just as the borders of Africa and the Middle East were redrawn. We will never forget that they did this.

And when we thought that neither the arrogant French and British nor the hypocritical American empire could sink deeper than this, they could still do so. After World War II we were thrown to the Communists without heartache. The reward of the Poles, the Czechs and the Slovaks was the same as our punishment. May this be an eternal lesson for the peoples of Central Europe!

Our great-grandfathers didn’t give up either. They did not kneel or ask for mercy. We stayed on our feet and endured. We endured the wagon towns, the Nazi camps, the Soviet gulag, the deportations, Czechoslovakia, Yugoslavia and Ceauşescu.

Today, there is no Czechoslovakia, no Yugoslavia nor a Soviet Union. There is no British or French empire. And what’s left of them is now twisting in the multicultural grip of their vindictive colonies.

Even the greatest cannot avoid the justice of history. And just as it is true that what belongs together will grow together, it is also true that what does not belong together falls apart. They said it well a hundred years ago: we will be there at the funeral of those who wanted to put us in the grave.

We Hungarians, on the other hand, will remain, no matter how the wind turns. We remain because we are at home. We are at home and therefore we remain.

Hungarians are contracting and expanding like the human heart, but we have been living for a thousand and a hundred years where our great state founders chose our place. We defend the Carpathian Basin with dignity, which is also our mission. Every new Hungarian child is also a new guard post. We do not cut, torment, or sell, but keep the Carpathian Basin.

We need to live with the self-confidence and attitude of a nation that knows it has given more to the world than it has received from it. Our performance entitles us to continue our history. And today we also need to know that we have had worse borders, yet we are here.

Instead of Czechoslovakia and Yugoslavia, we have Slovaks, Slovenes, Croats and Serbs. We are happy to build the common future with Slovakia, Serbia, Croatia and Slovenia, which are proud of their national identity. History has given the chance, perhaps the last, for the peoples of Central Europe to open a new era, to defend themselves against the danger from the West and the East, and to emerge together.

In the last ten years, we have proved to our neighbours that if the vitality of the Hungarian national fragments adds up, it is good not only for us, but also for them. Only the state has borders, the nation does not. This is the law. Some have understood this and some have not. Those who have yet to understand it would do better to hurry because they’re running out of time.

We have a thousand years of history behind us, so we transcend the limits of here and now. We see Bratislava in Pozsony and Cluj in Kolozsvár. We see it because we look at the world in a Hungarian way. We see the homeland high up, but we also see it under the blades of grass. If you see in Hungarian, you accept that Slovaks will be Slovaks and Romanians will be Romanians. We see in our neighbours what separates us, but also what connects us. He who looks at the world in Hungarian sees through the eyes of St. Stephen.

To see the 21st century through the eyes of St. Stephen means that we want to make the Carpathian Basin great together with the peoples who live with us.

Today we have once again become the most populous country in the Carpathian Basin. We haven’t been this strong in a hundred years. We are building bridges and railways down to Belgrade, and highways up to Kassa. Our political, spiritual, economic and cultural gravitational force is growing day by day. The return of Hungarians has begun. Compared to Western Europe, we are an island of peace and security. And to keep it that way, the new Hungarian army is also being built apace.

There is not a single nation in the world that could have endured such a century. But we are stubborn, tough and resourceful, therefore we have not only endured, but today we are winning again. Therefore, we express our heartfelt gratitude and our highest appreciation to our separated national communities for a century of endurance and loyalty to the Hungarian nation and their homeland.

Only one who walks his own Calvary can become a great nation. Who knows the way of hardship. Who can stand the test. He who understands that truth is worth little without power.

History is not merciful. It does not forgive weaknesses. If we are not up to the task, we are lost. If we listen to the kind hearted, we are lost. If we give in to the forces of disintegration, we are lost. Hungarians can never afford the luxury of weakness again. We can only have what we can protect. This is the law and this is our destiny. Therefore, for us, every match goes on until we win. That is why the history of Hungarians was not over at Mohács, Világos or Trianon, and that is why all the stones of St. Stephen’s crown will shine once again.

The next decade will not be about eclipses and losses, but about prosperity and nation-building.

The world is changing. The changes are tectonic. The United States is no longer alone on the throne of the world, Eurasia is rebuilding with full throttle, the frames of our European Union are crackling, and now it hopes to save itself with a salto mortale. The ground is trembling under the feet of our eastern neighbour. The Balkans is also full of questions to be answered.

A new order is being born. In our world, in our lives as well, great changes are banging on our gates.

We have seen our losses as irresistible setbacks for centuries. In the last hundred years as well. In the absence of our own strength, we expected a wonderful rescue army to come from the fog of legends, which would change the fate of Hungarians.

We can hope that our generation, the fourth generation after Trianon can fulfil our mission and take Hungary all the way to the gates of victory.

But the decisive battle must be fought by the generation following us, the fifth generation after Trianon. They must take the final steps. As it is written:

“Gather your strength. And first of all. Start with the simplest thing – Come together, To grow in a tremendous way, To somehow approach God, who is infinite. ”

Great times are ahead of you.

Get ready, and prepare every day.

Hungary before all else, God above us all! 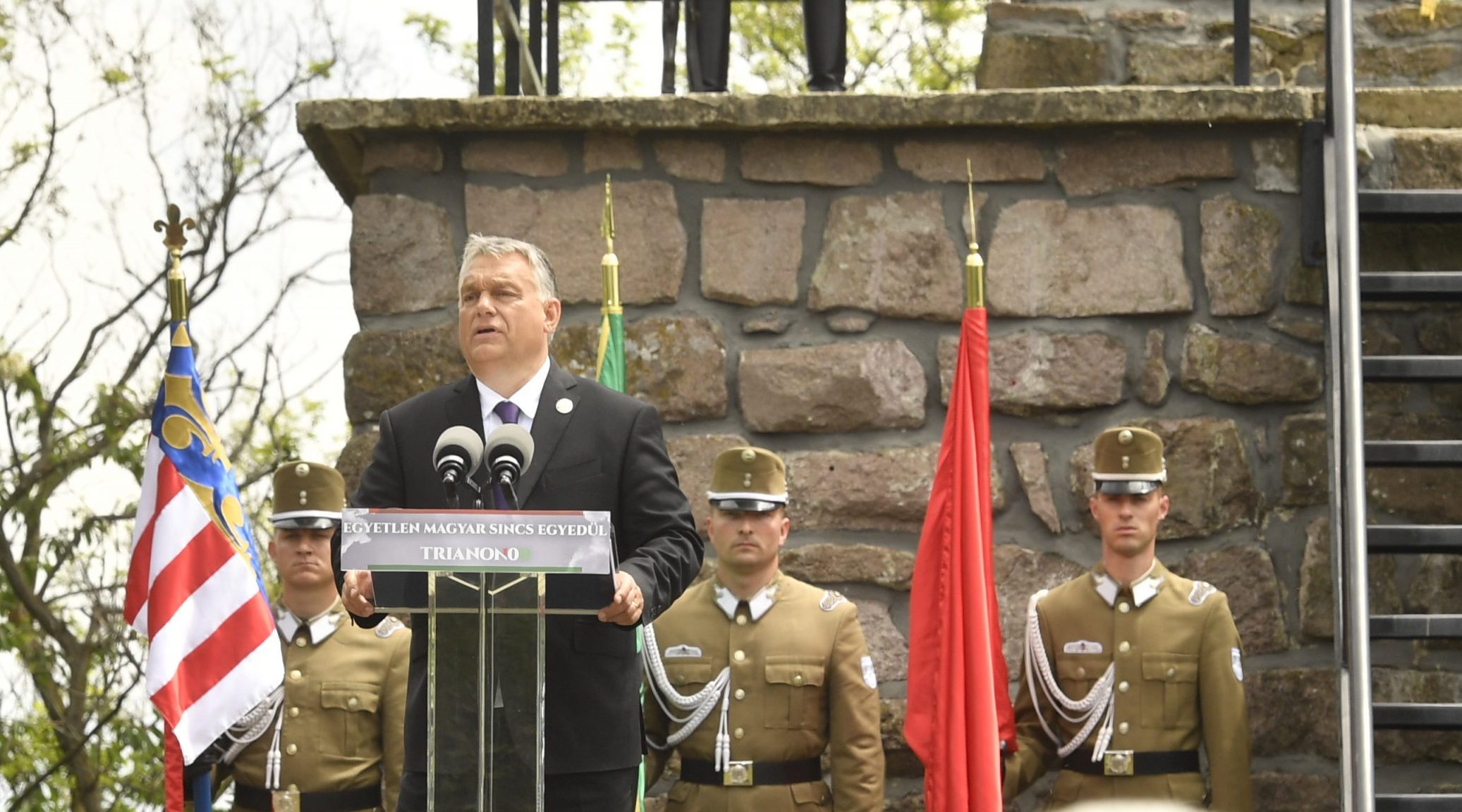 Hungary is on a winning streak again