If I’m not mistaken, I may be a talisman that will bring you good luck. That is what I wish. Allow me to welcome you all. It is an honour for me personally and for the whole of Hungary that you have invited me to this congress. I am honoured to attend the congress of a party of historic significance. I listened to the speech of your president, my friend Janez Janša. Until today I thought that the Hungarians were the ones who speak in the most direct, open and straightforward manner, but today I have to admit that we should content ourselves with the silver medal, as your president has spoken about the dilemmas which are tormenting us here in Central Europe even more openly and more clearly than we Hungarians.

First of all, allow me to pass on greetings from Mr. Andrés Pastrana, President of the Centrist Democrat International. The Centrist Democrat International wishes you good luck with your congress, and outstanding results in the election. Allow me to greet you on behalf of your neighbour Hungary and its governing parties, the Hungarian Christian Democrats and Fidesz. We are sister parties; this means that our shared set of Christian values also makes us confederates and allied combatants.

The first reason I came here today was to reassure you all that, in the important struggles ahead of you, you can rely on the Hungarian Christian Democrats and Fidesz – as well as on my personal support. We Hungarians see the Slovenian Democratic Party as the determining political movement in Slovenia’s history over the past quarter of a century; and I would like to reassure you that – thanks also to your president – your party is greatly respected in the whole of Europe. Just like you, we have also been up and down – in government and in opposition; and in politics one can never tell what the future holds. One thing is certain, however: without you, without your party, the history of a free and independent Slovenia could not be written today; and a free and democratic Slovenia in the future would likewise be inconceivable without your party.

In Central Europe politics is more reserved and restrained than in the United States or in Western Europe, and therefore we also tend to speak about our leaders in a more reserved and restrained manner. But in Hungary – and I’m sure here, too – we all know that our parties cannot be successful without strong, reliable and honourable leaders. Therefore allow me to put aside restraint for a moment and salute the historically significant performance which your president Janez Janša can lay claim to, with which he has earned respect and appreciation in the European Union – not only for himself, but also for your party and the whole of Slovenia. Janez, we are proud that we can be your friends. Your leader is not only an uncompromising democrat, and clearly a gentleman through and through, but also a freedom fighter who has seen enough of the world to know how far the shadow of a system like communism reaches. We Hungarians are also well aware that the post-communist world has two laws: communist comrades cannot be destroyed, they only transform; and if we throw them out the door, they will come back in through the window.

This is a reality of life that we must all reckon with – Slovenes and Hungarians alike.

We Slovenian and Hungarian democrats – but as we have our friend Mr. Dzurinda here, I can also say Slovak democrats – have a common cause: the future of Central Europe. Central Europe is the continent’s gatehouse and bastion : a diverse, Christian, multi-ethnic area, a place somewhat exposed to the winds of history – we could all talk about that at length – but which we nonetheless see as our common homeland. The fact that we can live here fills us with pride, and we are proud of our nations and their various historical achievements. Slovenes and Hungarians have survived some difficult centuries – sometimes together, at other times on our own. One thing is certain: we want to remain Slovenes and Hungarians in the future. We would like to thank President Janša for his book “Trenches”, which we can now also read in Hungarian, and in which he explained to us the complex and difficult history of the most recent period in Slovenia’s history.

We cannot fail to mention that we are all – both you and we – in the midst of a major European debate. To simplify the essence of this debate, the question here is this: migrants or our own families? Many in Europe today believe that the problems of an ageing Europe – in which fewer and fewer children are being born – should be solved with immigrants. We on the other side embrace a different approach. Even if it is difficult and complicated – and even if we don’t know the exact way and method – we should instead mobilise our own internal, physical, psychological and biological reserves, so that we can survive as nations. We believe that this is possible. They want to talk us out of this, and today many in Europe say that this is not possible. I would like to remind everyone that this was also the case during the migrant invasion: it was said that they could not be stopped, it was said that the borders could not be protected, and all that was ever spoken about was how and why things could not be done. I am convinced that the Central Europeans – when it comes to their own lives, their own future, their own countries, their own faith and their own families – are capable of anything. We are capable of anything. We protect ourselves, and in the period to come we shall continue to keep our heads above water.

As we have heard from your president, in Europe today European values are often mentioned, but frequently as though they were kept in a vault somewhere in Brussels: as if European values were kept in some safe, with only a few privileged individuals having access to the key. The truth, however, is that there are indeed symbolic strongboxes which keep these values safe. These, however, are not in Brussels, but in the hearts of European citizens: in the hearts of Slovenes, Hungarians, Poles, Germans, French, Slovaks. They are in the hearts of European citizens, because European values are not carved in lifeless stone, but into beating hearts: in each nation’s own language, in line with its own culture. Previously we didn’t need to talk about this. When we joined the European Union this was still clear. We must see, however, that in Europe today many are looking for different reference points. Many believe that Europe is in Brussels, and that from there they can tell the Member States who should do what. This way of thinking has led to consequences. It is precisely this mentality that caused the financial crisis in 2008, it is this mentality that weakened the Member States in their defence against the financial crisis; and we could also see where this mentality led in 2015, when it let migration loose on us. As a result of this mentality, the free flow of labour has been replaced with the free wandering of migrants.

We Slovenes and Hungarians see a great many European issues in the same light: we agree that illegal migration is a major threat to Europe; we agree that we must defend the Schengen borders not only with words, but also with deeds; and we also agree that every nation has the right to decide who they want to live alongside, and that no one else may make that decision for them.

I had the privilege of reading the draft resolution before you, which also contains an election manifesto, and which outlines the vision of a sovereign, proud and self-confident Slovenia. This is what you are fighting for, and this is what is written in your hearts. In light of this, I could give no other advice than that which we Hungarians gave ourselves in 1990, in the first free election in Hungary following the communist regime: listen to your heart. I advise you to listen to your hearts. Because if there is a heart, there is enthusiasm and there is faith; there is everything, and there will be victory as well.

And I shall take my leave by again reminding ourselves that we are sister parties. In Hungarian, the word “sibling” is a combination of two separate words: body and blood. This is a serious matter: brothers and sisters can always rely on each other. As far as I can see, you will need this unconditional support. You are becoming ever stronger, ever bigger and ever more recognised. The bigger you become, the better recognised you become and the better your chances of victory, the more you will be attacked. This is an unpleasant prospect, but is in fact good news. If you were not important, if you were not strong and a major force to be reckoned with, no one would bother with you. You are being attacked because you have a very good chance of winning. This is a law which is exactly the same in Hungary. I can tell you from personal experience that the road leading to victory is a difficult and arduous one – but believe me, it’s worth it. On behalf of Hungary, and your Hungarian brothers and sisters who stand in solidarity with you, I wish you courage, strong hearts and perseverance in your struggle. 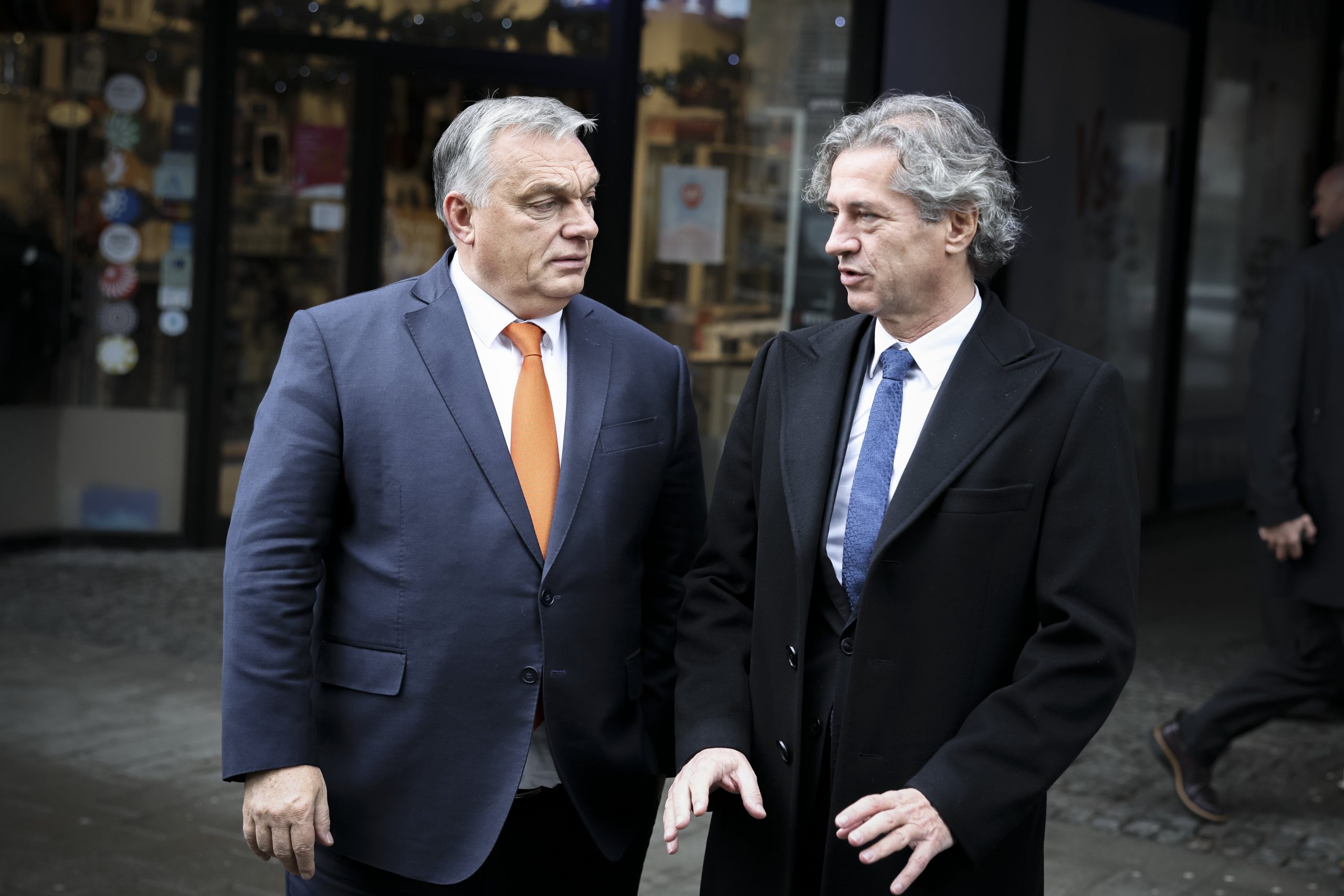