Adding to the words of my colleague and friend Mr. István Boldog, I’d like to second his statement that today it is no exaggeration to call this plant’s inauguration a key moment in the industrial history of Hungary. I’d like to thank you for inviting me so that I can be part of this moment. The inauguration of this factory does indeed mark a new beginning for the food industry. Those who have spoken before me have already told you what is and was required for such an investment to be realised. But one thing has not been mentioned; namely that at the very beginning, before anything was started, it required a bold and experienced entrepreneur, who was the first to affirm that this undertaking could be realised. That man was Mr. László Kárpáti. Let me express my appreciation and respect for the fact that the only reason we can be here today is that when you conceived this idea, you knew no barriers and fought through thick and thin for the chance to build this factory. The fact that all this started with an idea and a sentence shows that the wish is always father of the deed, and that only then can the work begin.

The first words to be said on the Government’s behalf are those of thanks. I’d like to thank the management and the employees of KALL Ingredients Kft., and all those who were involved in the construction of this plant, for providing such a wonderful opportunity with which to celebrate the demise of the EU sugar quota: may it rest in peace. We hope other quotas will soon meet the same fate.

Numerous studies have focused on what the aim behind the quota: the sugar quota. After all, in Europe it is not uncommon to even see attempts to prove that a dead horse is merely fast asleep. Here in Hungary we have our own opinion of this sugar quota. When we think of the economy we follow an old line of thought. We were taught that a tree is identified by the fruit it bears; and this is also how we can judge if an economic policy is good or bad. Irrespective of what universities teach about such economic policies, if they result in factory closures, jobs being lost and hundreds of farmers losing their livelihoods, those policies are bad. And, irrespective of how such policy is received in Brussels or what adjectives various theoreticians use to describe it, an economic policy that leads to the construction of new plants and the creation of jobs, and that opens up opportunities for farmers and entrepreneurs to be suppliers is a good policy.

Today Hungary has an economic policy that promotes the construction of factories. For us the sugar quota was not merely bad, Ladies and Gentlemen: it was disastrous. As a result of it, of the twelve sugar refineries operating at the time of the fall of communism, in the end only one survived. And the worst aspect of it is that a significant number of those plants had been built back in the nineteenth century. So what two world wars, the Great Depression and a socialist planned economy were unable to destroy fell victim to the fall of communism, EU accession and the sugar quota. The demise of the Hungarian sugar industry had a rather prosaic reason: in the end none of the refineries were owned by Hungarians. Let us draw the lesson from this: without a strong national industry we will always be vulnerable. When there is trouble, the only people we can count on are ourselves.

This is the twenty-ninth plant to be inaugurated since the first of January 2017. This also shows that Hungary has finally begun to pull itself together. Three weeks ago we inaugurated a Swiss logistics centre, last week the tyre factory of a Japanese company, and today we have this purely Hungarian food industry investment. So while we’re playing all the instruments, we must nevertheless admit that this third type of investment is the sweetest to our ears. The total value of domestic and foreign investments realised over the past ten months is more than 450 billion forints [EUR 1.5 billion], towards which the Government has provided around 40 billion forints [EUR 129 million] in funding. Through these new facilities 4,606 new jobs have been created over the past ten months. And we have come here today because here, in Tiszapüspöki, we see nothing less than the largest food industry investment since the fall of communism. For this I also express my heartfelt congratulations to the honourable Mayor, who is also with us today. The numbers speak for themselves.

A couple of years ago there was only a corn field here. Standing here today is a modern plant erected at a cost of 160 million euros, offering 450 to 500 jobs and employing a further 750 people indirectly, through services supplied. The plant’s annual turnover is expected to be 55 billion forints [EUR 177 million], 80 per cent of which will come from European markets. According to estimates by Eximbank, whose CEO is also with us today, the plant’s activities will increase the GDP by 185 billion forints [EUR 595 million]. And let me share with you another astonishing number: 530,000 tonnes of corn will be processed here. This means that the factory will not only be one of the most modern of factories, but it will also have one of the highest production capacities of any factory in Europe. All this will be achieved through using clean technology for corn processing that produces hardly any waste – or none at all.

With this plant Hungary’s reindustrialisation has reached a new milestone; and it is particularly important that this investment has been realised in the food industry. In Hungary, 217,000 of our compatriots rely on agriculture for their livelihoods. This is a significant number, because it shows that the number of those working in this sector has increased by 25 per cent in six years. Many of them are engaged in producing corn, and in this area Hungary is a strong team in “mid-table”. Opening this factory is also an expression of the fact that Hungary is now entering global competition in corn production as a fully-fledged participant. We are facing a tough task in a market full of true heavyweights. The largest corn producer is the United States, followed by Ukraine, China, Brazil and the 28 Member States of the European Union. With an average of 2.9 million tonnes in corn exports, Hungary is the second largest exporter in the European Union, after France. In 2015, for example, our corn exports were more than 4.4 million tonnes, which indicates that we were able to export half the total Hungarian output, even in a year in which weather conditions were favourable for production. This, however, is not in Hungary’s interest. Hungary’s interest is for much larger quantities to be channelled to domestic processing industry and animal husbandry than is the case today. Consequently, the strategic intention for the national economy is to replace raw material exports with highly processed products of high added value. In this respect, so far we have been like a country that exports iron ore, but which has a level of technological development and knowledge that enables it to deliver cars – even Mercedes cars. This is the strategy for the future, and today we are inaugurating the first pillar of this strategy – and maybe the most important one. This isosugar plant will produce ingredients for the food industry and the animal feed industry, sugar and starch products, and high-quality alcohol for use in the medical and food industries. A significant proportion of its products will be sold on foreign markets.

To sum up, I can tell you that today Hungary is once again standing at the gateway to a great era. The period between the Compromise of 1867 and the First World War is frequently referred to as Hungary’s economic golden age, when annual economic growth was 2.9–3.3 per cent. In 2013 Hungary was placed on a similar growth trajectory. True enough, now we are only in the fifth year and that earlier period was forty-three years longer; but if we act wisely, why shouldn’t we believe that this growth will last for at least another forty-three years?

For such an investment and such a factory, we need world-class investors, entrepreneurs and workers. I am convinced that Hungary’s greatest strength lies in its workers, who perform to world-class standards. World-class technology and a world-class factory cannot be run with workers of low or mediocre abilities and, as this example confirms, we have world-class workers, specialists and engineers. This is something of which we Hungarians can be proud. In addition to the workers, obviously we will also need people like those heroes from our past, such as Ábrahám Ganz and Vilmos Zsolnay: people with courage and competitive spirit; entrepreneurs who can produce the kind of goods that enabled their predecessors to bring fame to Hungary in foreign markets. I am convinced that this plant will be a worthy successor to those great traditions.

To sum up, I would like to thank everyone for their work enabling realisation of this world-class investment in such a short time and at record speed. I wish the company’s managers and employees great strength, good health and much success.

God bless you all. 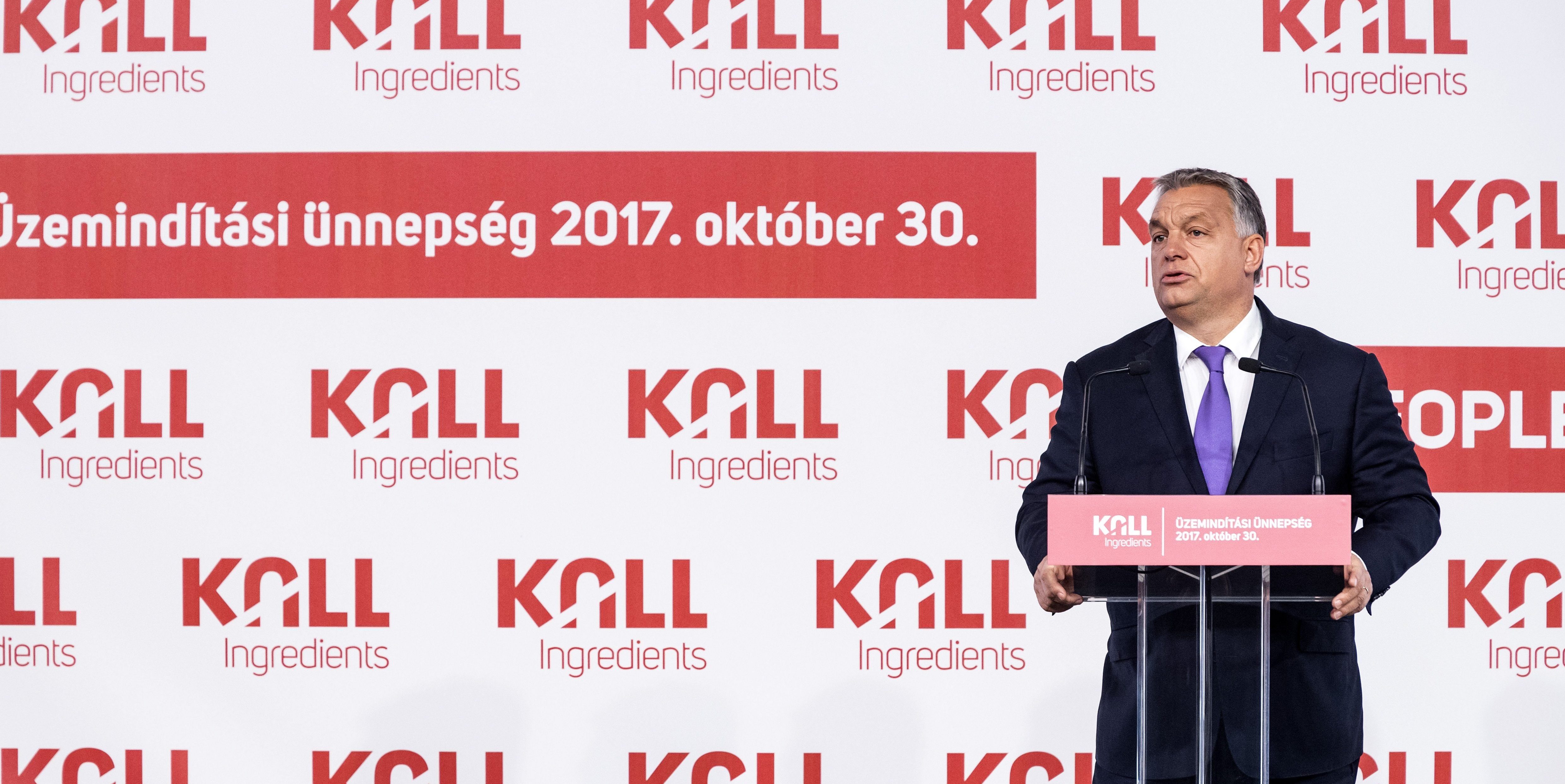