I greet our Bishop and you, Ministers, Ladies and Gentlemen,

I remember standing here in the courtyard in 1996, with Count Lambsdorff – perhaps we still have the photograph – who looked up at the freshly renovated Deutsche Bank building, and said: “How shameful! The church of money has been refurbished, while the church is God is in ruins.” In 2002, together we Germans and Hungarians put an end to that shameful state of affairs, and since then God’s church has been resplendent in its old glory. This is how it is if Germans and Hungarians unite their efforts in the interest of good causes: we succeed, and even God sends his blessing. I thank God, and I am glad to have been able to take part in this effort.

I have been thinking that if the Bishop gives a political sermon, how witty it would be for me to respond with a theological sermon. But I do not have the courage for that, and, while we are not people who readily sound the retreat, there is no reason to hit one’s head against a wall. So I will stick to my own trade, and warmly welcome the minister, the verger, the presbyters and members of the congregation. The last speaker tends to have the most honoured responsibility of summarising what has been said before – this is a most gratifying task. If I were to sum up in a single sentence the meaning to us of that day a decade and a half ago – when a television warehouse once again became the House of God, the church of the German-speaking congregation – a Protestant verse would come to mind: “God moves in a mysterious way.” It is no accident that we are celebrating this day with the inauguration of an organ. The Reformers saw church music as particularly beneficial for the soul’s delight, and for banishment of the Devil. Only a few days ago, when I had the privilege of presenting Kossuth Prizes, a Kossuth Prize-winning Protestant church musician told me that – and I quote him – “We shall punch the Devil in the stomach: he has no business here whatsoever”.

So I could also say that today, on Palm Sunday, when we inaugurate the congregation’s organ, we celebrate God’s special providence, which we know cannot be equalled by human logic and understanding. Because however much we would like to, with human logic we shall never understand how a path strewn with flowers and palm branches can turn to eventually lead to the Cross. God’s plans sometimes contradict the normal course of events. An example is when bells are cast from cannons; for who, even in the mid-eighties, would have thought that this building – hit by a bomb in the World War, with its interior completely destroyed under communism – could become a church once again? And who would have thought that this congregation, which so many times during its history of a century and a half survived on the edge of existence, would even after 1990 choose the harder path, rather than the easier one? Who would have thought that, instead of building itself a new church, it would take back the old one and undertake the Herculean task of restoring it? The German-speaking congregation took back its old church, and restored it. I understood it did so because this, too, was another means of affirming its own roots: the tradition of a century and a half which testifies to the fact that God moves in a mysterious way.

Five hundred years ago, a stone fell into the still water of the Western world, and suddenly everything changed. The wave set in motion in Wittenberg reached all corners of the Western world, and everything was renewed: church, economy and culture. One after another hymns and Bible translations appeared in national languages. This first laid the foundations for national literature, and later for nation states. Luther, Calvin and the other reformers emerged on the stage, this led to the rise and world supremacy of Western culture, and to the survival of the Hungarian nation, engaged in a life-and-death struggle under Ottoman occupation.

There are some patterns in life which are annoying, however. One such pattern, for instance, is that the ripples created by a pebble subside – and over and over again the surface of our spiritual life also becomes motionless. This was said about Calvin’s followers in Hungary by a missionary 150 years ago: “It is about time that the Hungarian followers of the Reformed Church not only proclaim their willingness to die for their faith, but also their willingness to live for it.” A century and a half ago yet another pebble was cast into the water, and the German-speaking Reformed Church congregation was formed. And it happened exactly according to the rules of divine providence. Because after all, Brothers and Sisters, what could possibly be the result of the following: Scottish missionaries establishing a German-speaking Reformed Church congregation in a Pest which was overwhelmingly inhabited by Catholics – originally doing so in order to witness to the Jewish community. According to our fixed ideas, the best chance of such a thing happening would be in a comedy script. But the director saw this as the very basis for launching a wave of renewal in Hungarian Protestant communities. This is where the Sunday School movement, the Christian Youth Union and the Blue Cross Association started out on a tour of national renewal; it is to this congregation that we owe the foundation of the Bethesda Hospital and the launch of a diaconics training programme in Hungary. And it is also from here that the spiritual awakening started out that put an end to the barren era of theological rationalism.

I have always felt that the history of this congregation is profoundly similar to the history of the Hungarian nation. Beyond my widely-known personal bias as leader of the National Government, the fate of this place has always been of deep interest to me. In this church I see confirmation of the fact that a diverse community in which the unifying substance is a common faith is able to become a strong spiritual structure – even after world wars, genocide and forced transportations. To all political leaders with patriotic feelings, your congregation, with its many roots, is living proof and encouragement of elemental strength. The German-speaking congregation was once among the smallest, yet it became capable of achieving things well beyond its strength. And in order to achieve those things, all that was needed was for someone to get down to business – someone who would profess their faith not only with their lips, but also with their heart. I believe that today also we need no more than to have brave communities which proudly proclaim to be Christian, European, German and Hungarian. Because I am convinced that on the 500th anniversary of the Reformation, we need no more than that there be pebbles that the hand of divine providence can cast into the water. If there are enough of these pebbles, Europe can renew itself – and Hungary, too, may stand firmly on its feet. God willing, it shall be so.

We need communities which proudly proclaim their Christianity today also 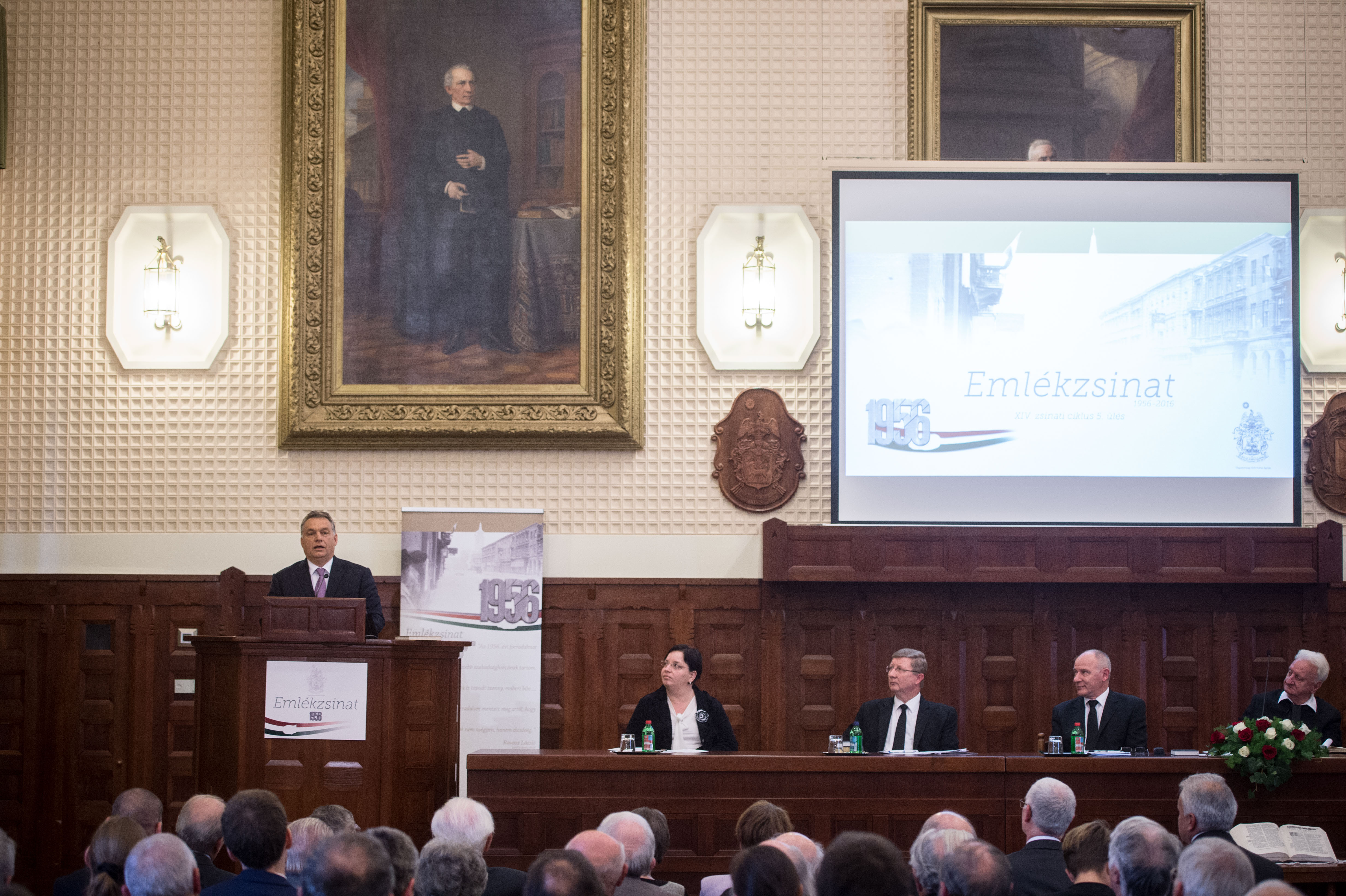