It is indeed raining, but the Béres Family must find the sensation familiar; because if we think back over the history of the company, it is not a sunlit story of success, but a long road you have travelled, often against headwinds, in bad weather and storms. I doubt that this rain today can prevent us from doing our job – and doing it in joyful high spirits.

My route here to the city of Szolnok was circuitous, and took longer than usual. Such a thing can rarely be said to be good. I had to come here via Jászberény, because in the other direction – the more straightforward direction – construction work on the M4 is being carried out. That work is part of the repayment of a longstanding debt to Hungary, to the City of Szolnok, and to its people. The result will be that we’ll finally be able to travel between Budapest and Szolnok on road with two lanes in both directions. At occasions like the opening of factories and plants, our host always adopts an unusual approach, and he did so also today, summoning up Bartók. The following will seem like a play on words on my part, but it’s not intended as a joke: as this is the third Béres corporate event I’ve attended, and if it’s true that the Béres family is the nation’s family of farm hands [“béres” means “farm hand”], then in a sense I am part of the family; because the duty of the prime minister of the day is to also join the ranks of the nation’s farm hands. In this respect, I am at home here. Thank you very much for the invitation.

First of all, it is important for us because it is the project of a Hungarian company. Here we have a Hungarian company owner providing jobs for Hungarian people. Foreign projects are important; we all know that we must make our products for the world market, and not a single modern country can operate without foreign capital. But if we have foreign companies but no Hungarian businesses alongside them, if the Hungarian economy only stands on one leg and not two, it’s only a matter of time before it tips over and falls. For us, therefore, it is of fundamental interest for there to be as many large Hungarian-owned businesses in Hungary as possible, and that they have access to as much capital as possible.

Secondly, this event today is also important for our country because this factory has grown out of a family enterprise. Everyone has to start somewhere – and where else could they start but in their family? Therefore we must especially value family businesses, as is the case in more fortunate countries to our west. The family represents a stronger bond: it’s stronger than money, and it’s stronger than business ties. If there are many strong family businesses in a country, the force that binds Hungarian businesses to that country is also much stronger. To date the Government has supported family enterprises, and will happily do so in the future.

The third reason that we’re supporting this enterprise is that it’s not content with being present solely on the Hungarian market, but it also competes abroad. It engages in international competition, and not only seeks to profit from the Hungarian market and sell its products locally, but it also accepts the challenge of international competition. Countries that isolate themselves have no future. In the fiercely competitive environment of the modern world economy, those who are not brave enough to compete in the international arena can never expect to survive as businesses with outstanding long-term achievements. Here we are the guests of a company which is present on the pharmaceuticals market all the way from the United Kingdom to Russia. The third reason that this project is important for Hungary is – and the Honourable President also spoke about this – that this is a project worth over 3 billion forints, to which the Hungarian government has itself contributed funding of some 1.5-1.6 billion forints. This is important, Ladies and Gentlemen, and the Mayor spoke about this, because there can be no success without self-confidence; and if the Hungarian state is only ever known for coming and taking, seizing, amassing and looting, but never provides opportunities for development, that doesn’t enhance our self-confidence, but damages it. We need a state and a country which is strong enough to offer a helping hand wherever it sees opportunities, potential for growth, progress and committed people. The programme within which we support companies like Béres – which in European terms are medium-sized, but by Hungarian standards are large – was specifically devised to enable Hungarian businesses and their employees to appreciate the importance of their work for the entire Hungarian national community. So the Government will continue to support these projects.

This project is also important for the country because there’s always a debate about who should be awarded the available funds – which are always more limited than desired. Should they be received by those who are only just starting out, or those who have already made some progress? The truth is always in the middle, and this instance is no exception: we must strike a balance. There must also be support for those just entering the market, but we must never forget those who have already proved themselves. Here we’re supporting a project which has been contributed to by the owners, management and entire staff. This is why when we support projects like this from Hungarian taxpayers’ money, we don’t take any chances: we know exactly what the stakes are, we are familiar with the results, we can see how these investments have produced ample returns for the entire Hungarian national community, and we therefore have grounds to hope that the development now implemented from these funds will also benefit us all. So I’d like to repeat that the Hungarian government will equally support those who have already proved themselves.

The sixth reason that this project is important for the whole country is that it’s being created in Szolnok. The Mayor has already spoken about this, and I don’t want to repeat his words, but merely wish to underline them. It’s easy to achieve results – though those concerned may not agree with me – say in Sopron, or in Budapest. But to achieve results in a city like Szolnok, which had to endure so much suffering after the fall of communism – and we have a few other former industrial towns which needed several decades to find their feet and regain their standing – that’s a genuine performance to be applauded. The facts are these: today unemployment in Szolnok is around four per cent, so we’re close to full employment; and once again Szolnok has industrial facilities, and the people of Szolnok can be proud of these facilities operating in the city. These are achievements which are a tribute to the Mayor, and are a tribute to the perseverance of the people who live here and the company management here. They also highlight the fact that the Hungarian government is also paying close attention to these towns and cities.

And, finally, the seventh reason that this factory and this event are important for Hungary is something a little more complicated than the other reasons I’ve mentioned: perhaps the best phrase I could use to describe it would be “value system”. Every factory has products. If we buy them, that is something that we all know. And I believe that now I should encourage those present to do so. But in addition to products, every business has its own business philosophy, and indeed a guiding concept of how it envisages its own place in the community, the national economy or the national community in which it lives and works. One can easily identify every company’s self-determination emerging from this kind of philosophical approach. We know the Béres family well, and we know the Béres factory well. This is a family enterprise. Many times the patriarch of the family – or, if you like, the founder of the empire, if this isn’t an exaggeration – clearly explained to the entire Hungarian public, even on cinema screens, the meaning of research and the meaning of development and how to ethically combine business achievements with service to the country and the nation. So here we’re talking about a company which has always set its sights beyond mere profits, market share and the merciless logic of mathematics, and which has paid attention to the world surrounding it, and has paid attention to Hungary, and to us. This is an important thing, and businesses like this should be especially valued. I would just like to say that in the modern world a business usually has an image. This is even taught, with image manuals. Béres, however, is a Hungarian business which doesn’t have an image, but a face. And this, Ladies and Gentlemen, is a big difference. It has a face and a personality, of which we express our appreciation. How does this manifest itself? Every year the factory’s owners make charitable donations of one hundred thousand bottles of Béres Drops; they’re committed supporters of campaigns launched to promote healthy lifestyles; they’re committed supporters of the Hungarian Handball Federation and the Hungarian Olympic Team; and, as the Honourable Mayor has also mentioned, they take part in screening programmes throughout the country.

Finally, once again allow me to congratulate everyone who was responsible – whether intellectually or physically – for the creation of this new plant. In closing, I hope you are all able to make this development of yours as much of a success as your earlier ones. We have learnt that what’s good for the Béres business and what’s an achievement for the Béres enterprise is also good for Hungary, and is also an achievement for Hungary.

God bless the family, those working here, and the managers of the plant. I wish you all much success. 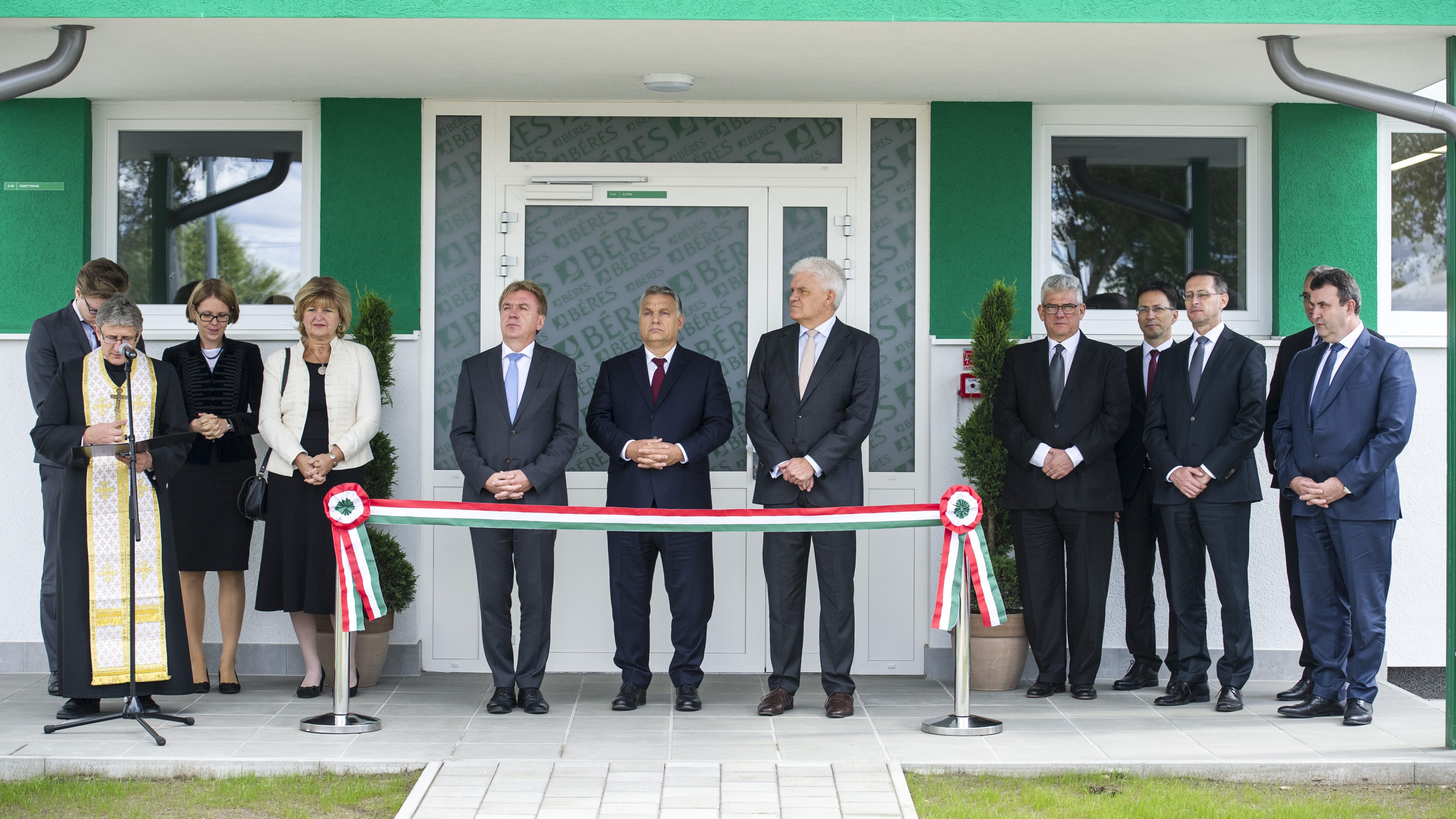 The pharmaceuticals industry is a driving sector of the Hungarian economy 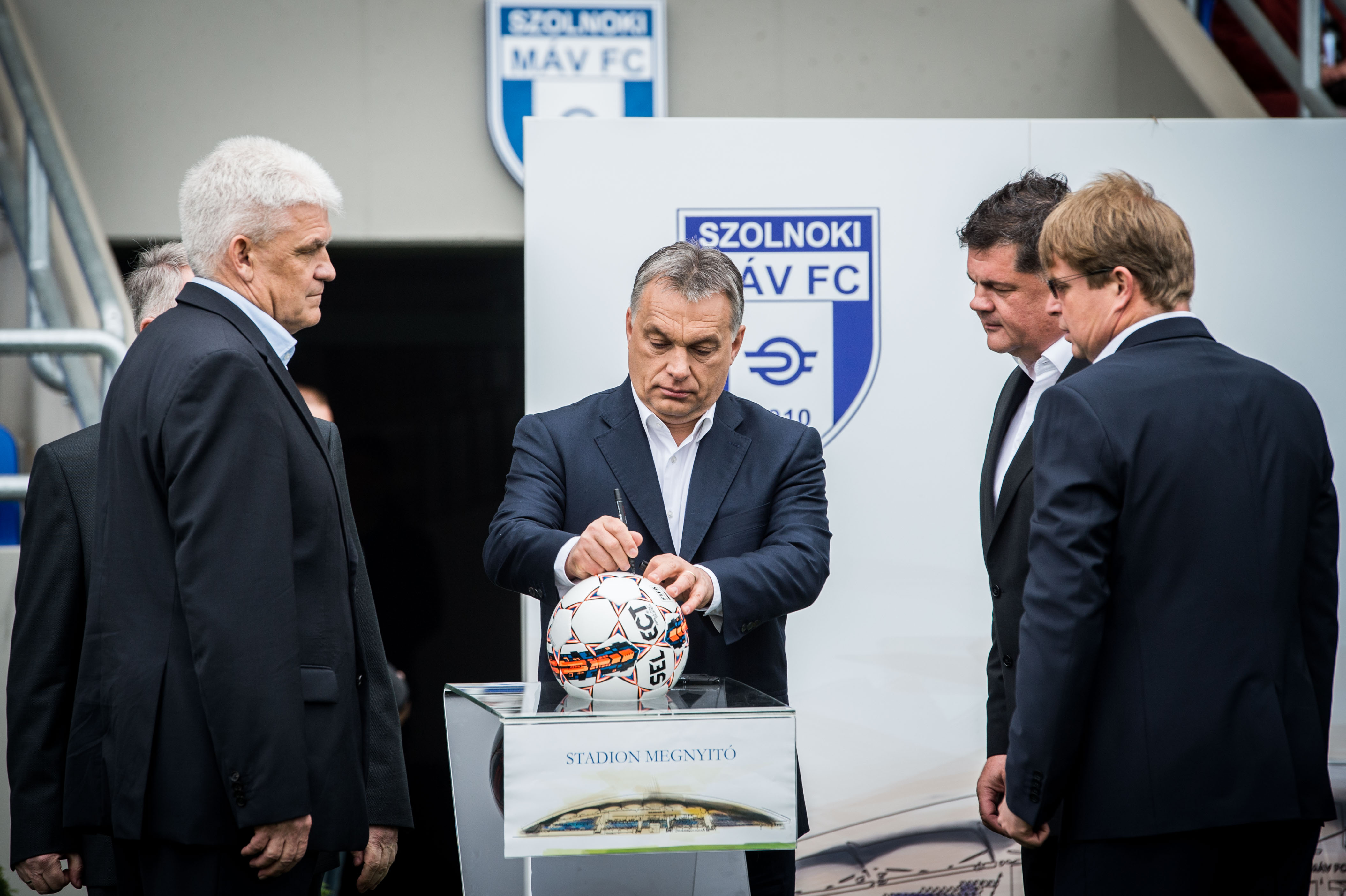