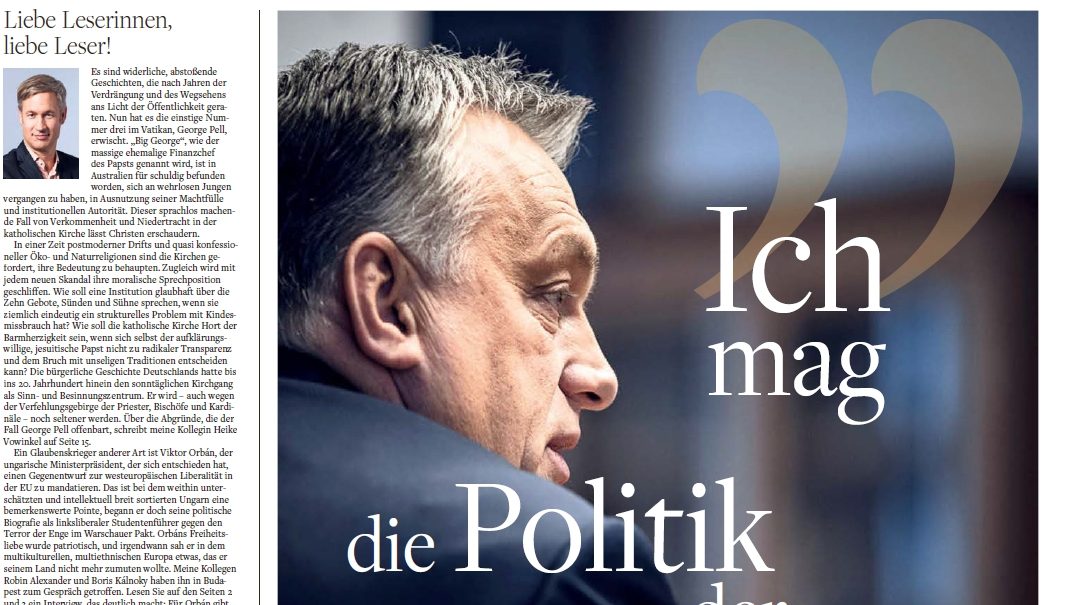 Rupture in German-Hungarian political relations was caused by immigration
03. 03. 2019.
| source: MTI
The conservative German Sunday paper Welt am Sonntag published an interview titled ‘I do not like politics of revenge’ with Prime Minister Viktor Orbán.

Regarding Hungarian-German relations, the Prime Minister highlighted that “any negative features that exist (in Hungarian-German relations) are down to politics” and in all other facets of life relations are excellent. The rupture was caused in political relations “by immigration, nothing else,” he added, underlining that “we insist on the right of nations to self-defence,” while the Germans have “a different philosophy”. “I am certain I am also personally responsible to some extent for the negative Hungarian-German political atmosphere,” Mr Orbán said in answer to the question as to whether – if politicians are responsible for the current state of affairs – he has any share in this.

While the differences “on the issue of migrants cannot be bridged, they can be managed”. To this end, the common issues arising from migration must be removed from the competence of the European Commission and must be left to the council of interior ministers of the countries concerned.

“The interior ministers of the Schengen Area should create a powerful body which would have the authority to decide on issues concerning the entire Schengen Area as experts do, not as politicians,” Mr Orbán said.

In response to the suggestion that almost four years have elapsed since the start of the migrant crisis, he underlined that “everything we have experienced since 2015 will happen again even more intensively” because the Arab world’s population will soon exceed that of the EU, “not even mentioning Sub-Saharan Africa which will hardly be able to support this many people”.

In this situation Hungary is a “border country” which is “living in a state of full preparedness”, and is aware that whether the millions of refugees currently staying in Turkey will start heading out for Europe only depends on the Turkish government.

At the same time, Germany is situated in a more protected location, and therefore perceives its situation as more secure. “It is from this and our different historical experiences that our different mentalities stem,” the Prime Minister said.

Regarding the criticisms levelled within the European People’s Party (EPP) at the government campaign concerning migration, he said the EPP’s “problem stems from the fact that it has grown too large,” and its northern members are closer to French President Emmanuel Macron than to the Christian Democratic Union (CDU) of Germany. “Regrettably, migration has only amplified these differences.”

He said concerning one of the main figures of the campaign Jean-Claude Juncker that the Luxembourg EPP politician’s perception “is widely different” in the West and in the East. “In Western Europe the EPP campaigns by saying that the new lead candidate Manfred Weber will continue Mr Juncker’s work,” which in Central Europe amounts to “political suicide as Mr Juncker barely even commands any respect here”. “If the EPP wishes to win in Central Europe, it must state that Mr Juncker is the past, while Mr Weber is the future,” Mr Orbán said.

“I do not like politics of revenge, revenge is always about something from the past, it weighs you down,” he added in answer to the question as to whether the hoarding campaign serves as revenge for the fact that Mr Juncker demanded the expulsion of Fidesz from the EPP.

He said Mr Juncker is “a kind man” whom one is ready to forgive despite “his most awkward and most foolish gestures,” and there are no hard feelings between them. However, his “attempt” to have Fidesz expelled is a matter of “personal disloyalty,” and “no one can expect us not to respond to such disloyalty even if that disloyalty comes from a man who is ever so kind”.

“In Hungary a hoarding like this does not in any way provoke thoughts of anti-Semitism in anyone,” he said in response to the suggestion that the hoardings have certain anti-Semitic connotations. This idea “seems like a German problem”, Mr Orbán said.

“Earlier there was anti-Semitism also on the Christian Right in Hungary, but we have put an end to it,” and today “anti-Semitism has a new nature: today it is migration that brings animosity towards Jews and Israel to our societies”. “This is why while in Western Europe anti-Semitism is on the rise, it is on the decrease in Central Europe. Europe has no concept of how to deal with this, though it should,”, Mr Orbán argued.

The other figure of the campaign, George Soros “embodies the negative face of globalism”. On the one side there is Hungary which is represented by its elected leaders. On the other side, however, “there are international civil society organisations, NGOs financed by George Soros which were not elected by anyone and which want us to pursue a different kind of migration policy,” the Prime Minister continued, highlighting that migration policy will be in the focus of the upcoming EP elections, and “it is the two of them who embody pro-migration policy”.

In the next phase of the campaign which “will be a party campaign, hoardings will feature another figure, Mr Timmermans. Mr Juncker will retire, to be replaced by Mr Timmermans,” he said in reference to the European socialists’ lead candidate. “George Soros plays an inevitable role in European politics, and everyone has the right to know that Mr Timmermans is admittedly his ally.”

He highlighted that the attacks due to the campaign were launched from the Left, and “if Fidesz did not exist they would attack someone else”.

There will always be someone that the Left “will pick at, this is the essence of their power technique”. This is what they call salami tactics, and its goal is to weaken the EPP and to take control of Europe.

“So this struggle is not of an intellectual nature; its essence lies in power. One must understand this. Not everyone does, but in political literature they are referred to – after Lenin – as ‘useful idiots’ who while believing that they are engaged in an intellectual struggle in actual fact serve the power interests of others, of our enemies,” the Prime Minister said.

In answer to a question he confirmed that this also applies to members of the EPP who “see division as the right tactic, instead of unity and uniting our forces”.

“Mr Juncker may propose that we should be expelled, but I would never demand the expulsion of the Luxembourg people” because “this would only favour the Left, and I would thereby lay the groundwork for a power takeover by the Left in Europe,” Mr Orbán said. 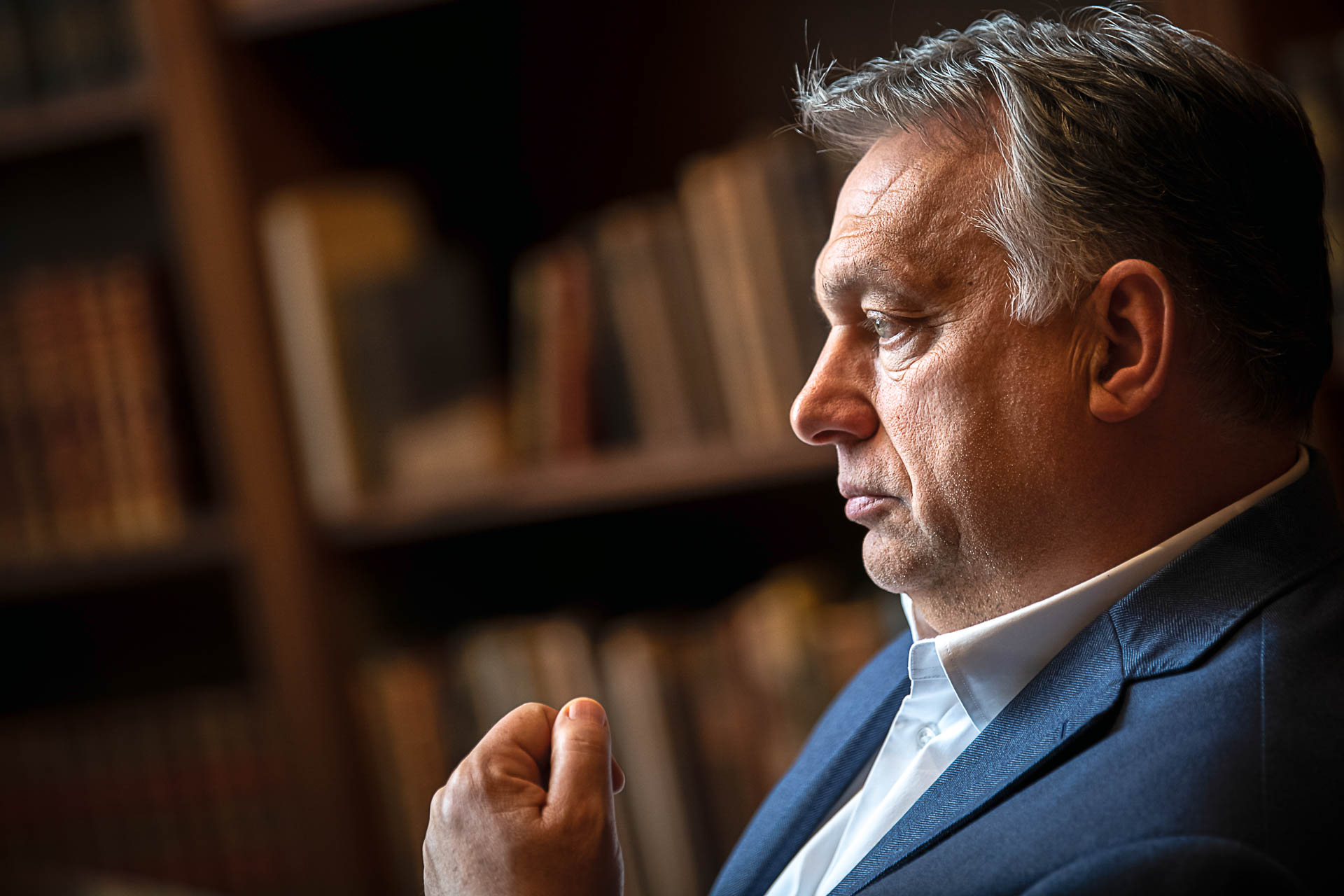 While we here in Hungary are literally fighting a life-and-death battle against the coronavirus, the EPP is indulging itself in power games within the bubble of bureaucrats in Brussels
tags
EPP European People’s Party German-Hungarian relations Germany György Soros Helmut Kohl NGO