Speech by Prime Minister Viktor Orbán at the inauguration of a statue of George Herbert Walker Bush, 41st President of the United States
source: Cabinet Office Of The Prime Minister
27 October 2020, Budapest

Szabadság tér. Liberty Square: the square of freedom. A telling name – especially now, in the week of the anniversary of the 1956 Revolution. But we Hungarians also remember that, on 6 October 1849, the courtyard of the barracks which once stood here was the place of execution of the first Hungarian prime minister. The life of the first prime minister of the Hungarian people came to an end in front of the occupiers’ firing squad. This sent a clear message to all his successors. For those who are slower on the uptake, at one end of the square there is a memorial to the victims of the German occupation, while at the other end there is a memorial to the victims of the Soviet occupation. This, too, sends a clear message. If you are Hungarian, you only have two options to choose from: either you side with the occupiers, or you side with freedom.

And this is also where we find the Embassy of the United States of America. The Hungarian people have always thought of America as the land of freedom. We’ve never thought of it as a perfect country; there is no such thing – not even our own, even though we’ve lived and died for it. But every Hungarian knows that America is the land of freedom, the land which welcomed Kossuth with sincere warmth, and the land which – in this building over a period of fifteen years – gave refuge to our confessor Cardinal József Mindszenty. The Hungarians also know that in 1919 a brave son of America – General Harry Hill Bandholtz, whose statue also stands nearby – confronted occupying soldiers about to plunder the Hungarian National Museum, and used his riding crop to drive them out of the building. And neither will we ever forget that – thanks to Ambassador Mark Palmer’s personal commitment – the doors of this building were always open to the young people fighting to end communism. Today we have gathered here to pay tribute, through a statue, to our friend George Herbert Walker Bush, 41st President of the United States.

Standing here in this square are two men from America who together launched an offensive against global communism. This is exactly what we asked of George Bush Senior on that stormy summer evening when he arrived in Kossuth tér. On a banner raised to welcome him, we asked him to set us free from the agreements made at Yalta. And he supported us in that. Our dream for the freedom and independence of the peoples of Central Europe was also his dream. He understood that whatever nonsense the comrades over there on the inside told him, we Hungarians didn’t want a better deal with the Soviet Union, but to break away from it. We didn’t just want communism to be made more comfortable for us with American money, but we wanted to overthrow communism. We didn’t just want to get closer to the free world, but we wanted to become a part of it. And when I spoke to him back then, I saw for myself that the President knew how long we Hungarians had waited for this. Since 1956.

“George Bush was a great blessing.” This is a worthy summary of what his presidency meant to the world, to Europe and to our country. A fitting statement, made, moreover, by a German: Chancellor Helmut Kohl. And he was not alone in this opinion: he spoke from our hearts, and in the Europe of that time many of us felt the same way. We thought that the United States which he led would not let us down – just as he promised when he spoke to us about a free world, in a speech given a few metres from here, in Kossuth tér. His words carried the weight of those in a treaty. He was of the old school, and he kept his word. He was a tough man, who served in action as the US Navy’s youngest pilot and who achieved outstanding results in the business world. In the political ring, after several election failures he became a representative, vice president and, finally, president. He was a man who didn’t simply want things to happen to him: he worked hard to achieve what he wanted, and to do what he thought was right. Without him Chancellor Kohl would not have been able to reunite Germany. I vividly remember the debates of the day: those two men had to do battle with the leaders of several European countries, who saw the status quo as the basis of their own security, influence and prosperity. History has vindicated the courageous act of Bush and Kohl. After a few short years, everything that was artificial and without traditions fell apart, and everything that had strong and deep roots came back to life and started growing. After Germany, Europe, too, was reunited.

Ladies and Gentlemen, Your Excellency,

Every Hungarian knows America is land of freedom 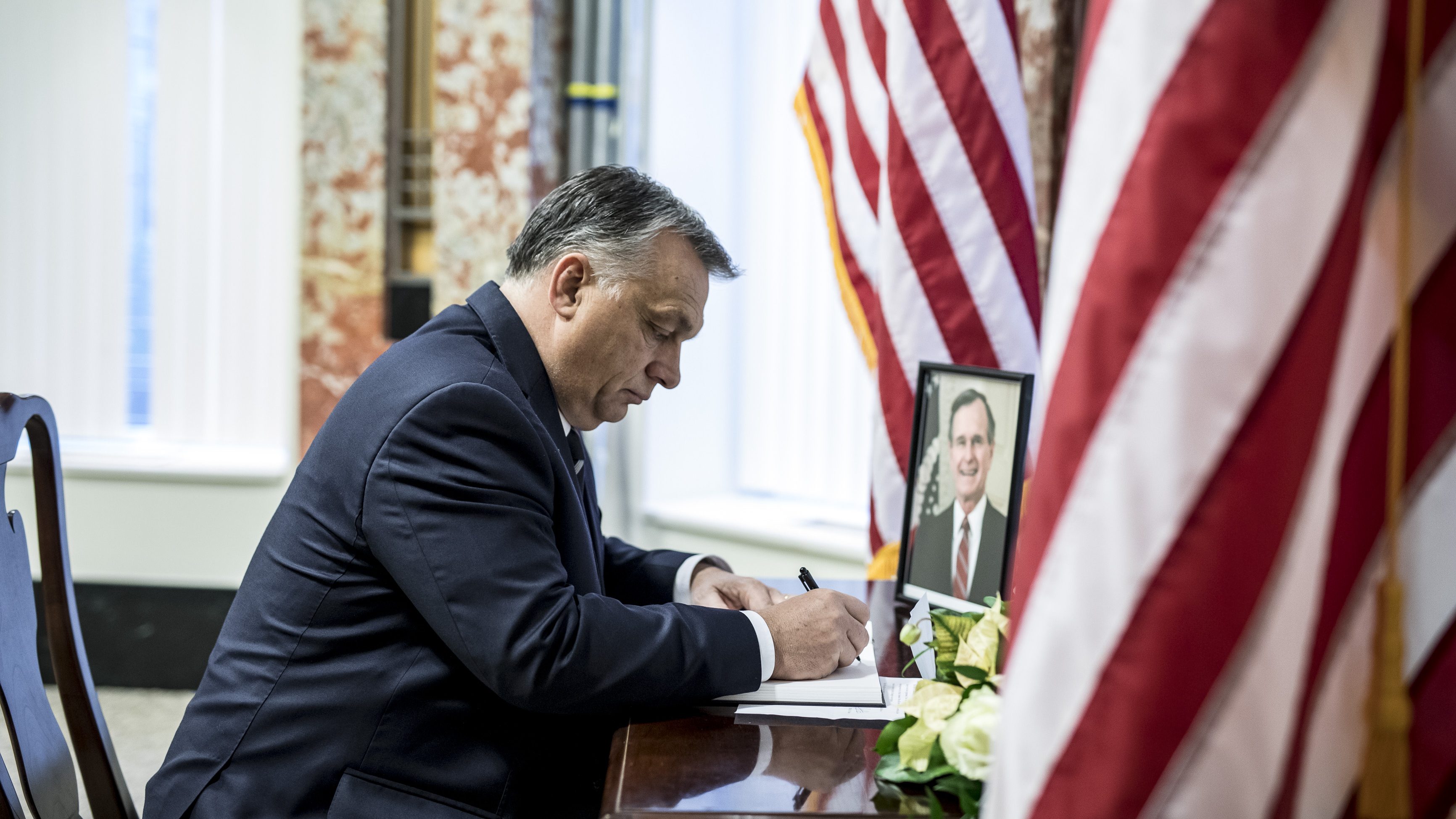