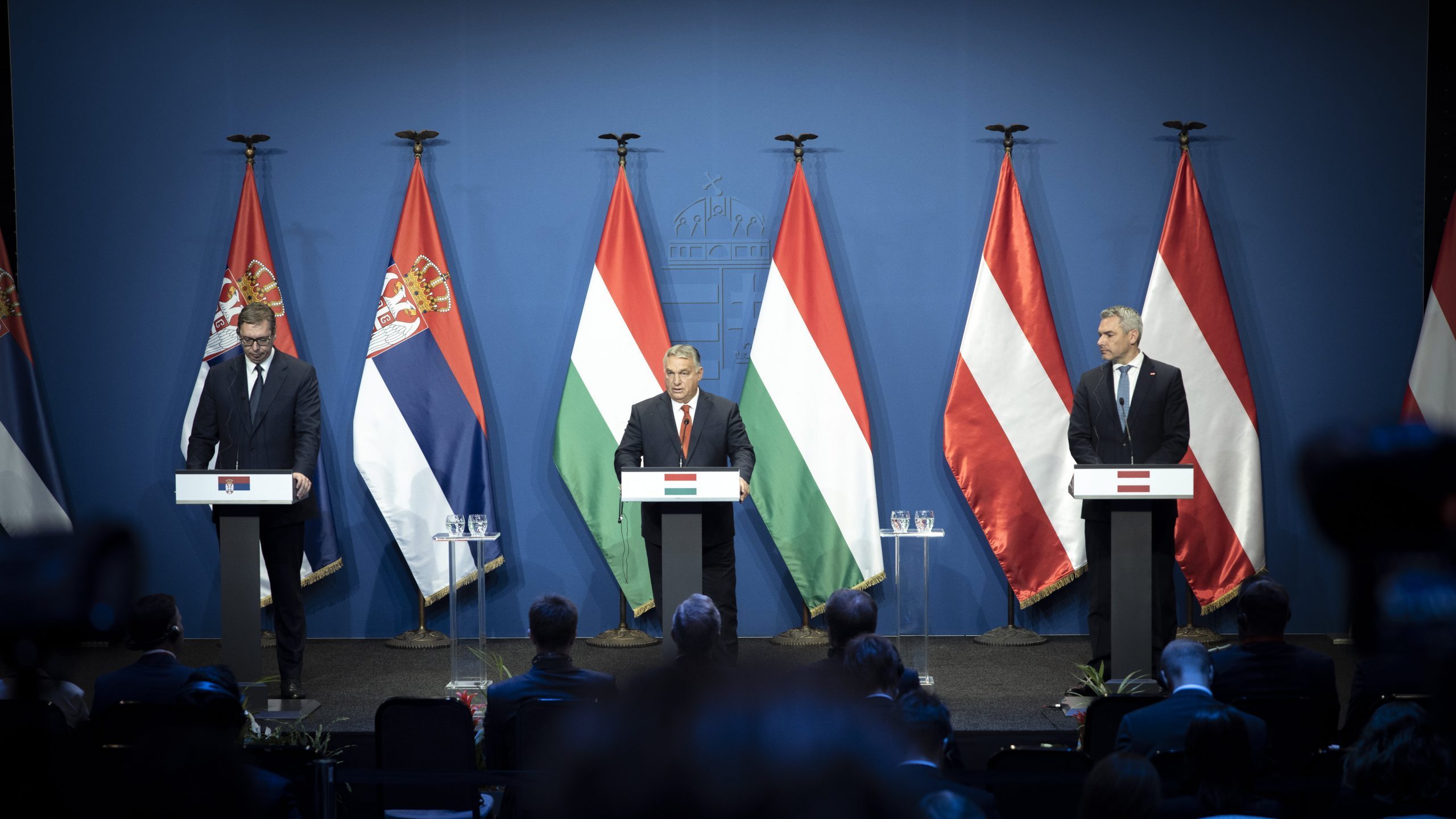 The Prime Minister had talks with the Austrian Chancellor and the Serbian President at the Castle Garden Bazaar. At a joint press conference held after the meeting, Mr Orbán highlighted that this is the first, opening meeting of a longer series of talks. The leaders of those three countries met here which are being affected by the issue of migration in the most severe possible way, “we all three are suffering from illegal migration,” he added.

He observed that this absorbs much energy and live force as well as enormous amounts of money; “meanwhile, we are not at all satisfied with the situation that has developed”.

He said the world has other burning problems as well, and attention is being diverted primarily towards these as we have the Russo-Ukrainian war, “we have the problem of high energy prices and the sanctions which is taking its toll on all of us,” and there is not enough attention being paid to migration, despite the fact that this is at least as important a question as the other two.

He said today they had made an attempt to face the situation and to work out measures. Hungary initiated this meeting “because we are in the most complex situation,” given that we have a migration problem from two directions. In consequence of the Russo-Ukrainian war, more than a million refugees have arrived from the easterly direction, from Ukraine, and meanwhile the borders are also “under permanent siege” from the south, he said.

Mr Orbán observed that “we have a few further developments ahead of us” that will make the situation even more difficult. We see no change in the Brussels policy that encourages migration, the re-distribution quotas are placed on the agenda time and again, he explained.

He said, additionally, due to the war and the sanctions, there is a global economic decline and a global food crisis, and these will all increase the weight of illegal migration.

He highlighted that from among the migration routes leading to Europe, the Western Balkans route is the most severely affected one. Additionally, it is causing further difficulties that “both illegal migration and the activity of people smugglers have moved to a higher level,” they are now also using firearms with live ammunition in conflicts between one another as well as against border guards, he said.

He stressed that these three countries are protecting not only their own borders, but also the whole of Europe. Hungary is honouring its obligations arising from its Schengen membership, but it has a vested interest – and so does the whole of Europe – in pushing the line of defence as far south as possible. At present, the Serbian-Hungarian border is the primary line of defence, and everyone has a vested interest in moving it further south, Mr Orbán said.

The Prime Minister also said Hungary had provided assistance for Serbia and North Macedonia also to date, but now we needed a new dimension of cooperation. Therefore, soon after the Monday meeting, there will be another one in Belgrade where the competent ministers will have talks and will devise legal solutions for specific measures, while once there is common action, they will also clarify the relevant financial and live force conditions there. They are further planning a third meeting which could be held in Vienna, he added.

In answer to a question, Mr Orbán said first the line of defence that cannot be penetrated must be pushed as far south as possible, and this must be achieved step by step. Secondly, those who are in our countries illegally must be taken back to where they came from. Thirdly, hotspots – in other words, refugee processing centres – must be set up outside the territory of the European Union so that asylum applications can only be submitted there, he listed.

He said the transport routes leading to Hungary from the east have either already been paralysed or will be paralysed during the period ahead, and so Hungary’s key links are in the southerly direction, be they about transport, energy or gas. “Today, Hungary must look upon Serbia as its most important partner through whom it can access the world,” the Prime Minister pointed out.

He said, therefore, they are striving for the closest possible cooperation with Serbia. “We are grateful to the Serbian people for the fact that the pipeline through which Hungary is receiving gas today comes through them,” he said, adding that “as long as there is gas in Hungary, Serbia, too, will have gas, we will help each other out one way or another”.

He observed that there is no common European solution to helping European companies. “Of course, they’re forcing the policy of sanctions on everyone,” but there is no common fund to compensate for the financial consequences of the sanctions. Therefore, rich countries will help their own companies with enormous amounts of money, while the poorer ones will not be able to do so. Brussels will have to do something about that because this will shatter European unity, he highlighted.

Mr Orbán said Austrian-Hungarian relations have always been pragmatic, and the time has come for us to put ideological issues to one side because today we need specific solutions, not ideologies.

He said “we have never received any help from Brussels,” Hungary has never received any money more specifically for the construction and operation of the fence. In fact, in Brussels they are maintaining rules that “are alien to the realities of life in this corner of the world,” he laid down.

He took the view that the migration rules with which they want to operate the asylum system in Brussels “only cause trouble” in this region of the European Union. We must do everything we can to create a new refugee policy in Brussels, “we can’t just sit back and relax, we must take action,” he stated.