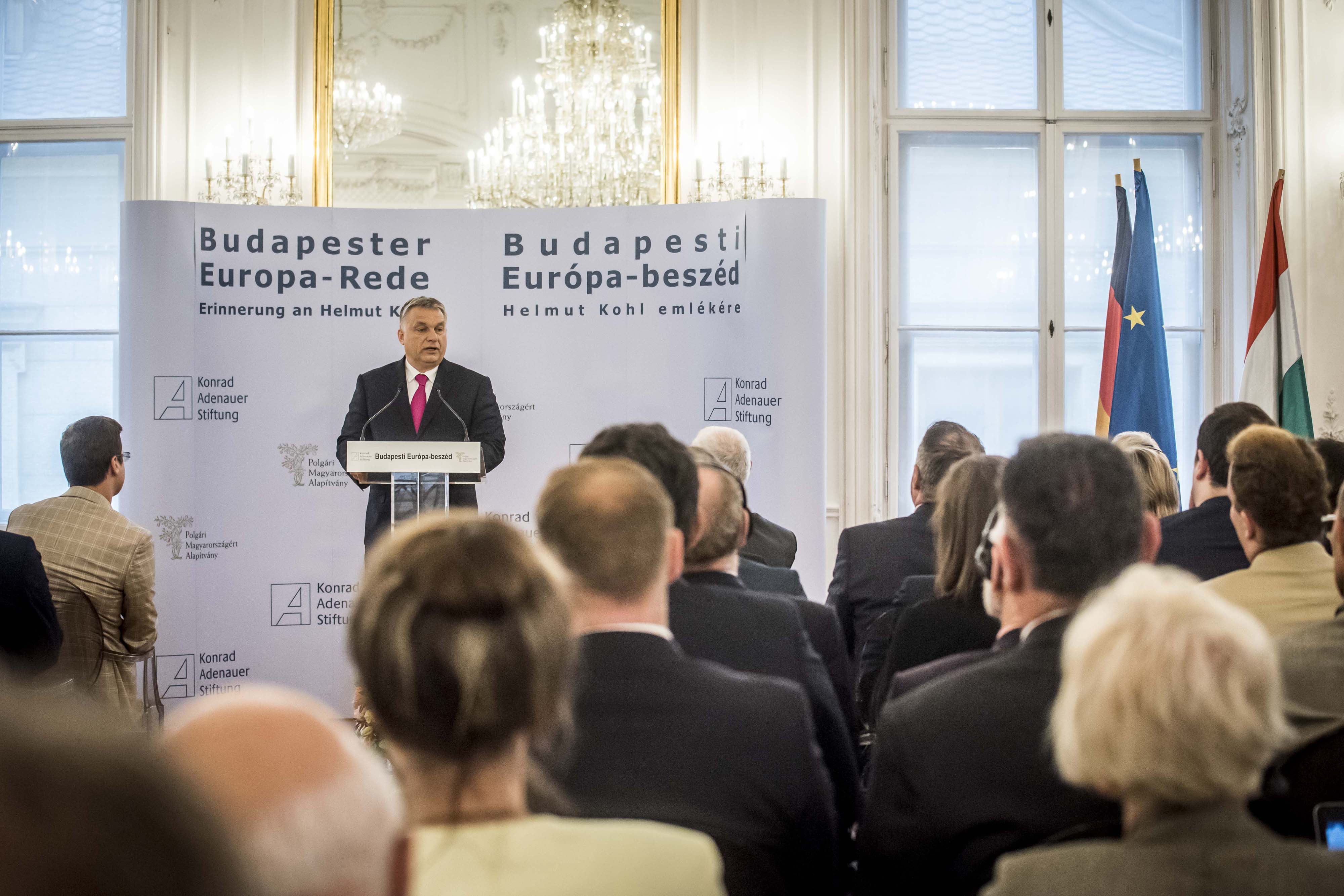 There can be no compromise in the migrant debate
17. 06. 2018.
| source: MTI
Prime Minister Viktor Orbán delivered a speech at the conference “Budapest Europe-talk”, which was held in the Hungarian capital on Saturday. In his speech he said that the European Commission’s draft for the EU’s next multiannual budget is pro-immigration and pro-migrant, and would give taxpayers’ money to migrants and NGOs. It is as if the draft had been written by George Soros himself, said the Prime Minister, who also stated that in 2019 the Commission must go, and a strong Europe needs strong nation states.

At the conference – held on the first anniversary of the death of former Chancellor of Germany Helmut Kohl – Mr. Orbán also said that Hungary can offer assistance with joint European policy in a number of fields: it can offer a good example in the sphere of economic reform, and can provide help in transporting migrants back to their home countries. The Prime Minister highlighted that one must export assistance, not import problems.

He added that Hungary is also able to offer advice if anyone requests it. There is, however, one piece of unsolicited advice that Hungary can give, he said, because it has historical experience of the issue: everyone should be wary of the idea of Islam being part of any European country.

The Prime Minister stated that – in addition to offering an example, help and advice – Hungary must clearly state that it will not give up in the future either, and it will not allow anyone to force anything on it that it does not want.

He pointed out that if in the course of talks in the EU a satisfactory result cannot be reached, and if there is no acceptance – or even toleration – of one another’s views on migration and the budget, decisions should be delayed until the people have expressed their will in the 2019 elections to the European Parliament. Then, he said, what must be shall be.

He said that in the migrant debate there can be no compromise, but neither is there any need for it.

Speaking about Hungary’s possible role in European politics, Mr. Orbán said that the country is aware of its own strength, influence and mission. As a Member State of the EU it does not aspire to a political role in Europe, he said, adding that “For us Hungary comes first, and neither the country, nor I have – or will have – any such ambition.” The reality, he stated, is ten million citizens, a GDP of EUR 114 billion and fewer than twenty thousand soldiers.

He highlighted that Hungary’s involvement in serious disputes on important issues with Brussels and some Member States has created the tempting illusion that the country can have a significant influence on European politics; but this temptation must be resisted, and efforts must be focused on defending Hungary’s national interests.

The Prime Minister described Hungarians as having self-respect and pride, but also sound self-knowledge and a realistic assessment of their situation. Where they do have strong ambitions, he added, is in Central Europe and the Visegrád Four.

Mr. Orbán said that the Hungarian ambition is to enable Hungary to live in a strong Central European region comprising countries which closely cooperate, and which help and encourage one another. This is where the strength represented by Hungary has influence and importance, he said, adding that Hungary recognises Poland’s determining and leading role in the Central European region, while with its own strength it seeks to guide Central European international relations towards cooperation. He described another ambition of Hungary as promotion of the accession to the European Union of the countries in the Western Balkans – with particular emphasis on the future membership of Serbia. The Prime Minister said that it is Hungary’s ambition to convince the other Member States that the European Union needs this, and that it can gain new resources through further enlargement.

Mr. Orbán stressed that Hungary wants a strong Europe, but this “needs strong nation states”, and while the European Union is still rich, now it is weak. In his view the community’s future depends on whether it is able to defend its external borders. If Europe succeeds in defending its borders, the issue will not be the distribution of the migrants arriving in Europe, but the fate of those who are already here. He pointed out that they should not be “distributed, but should be taken back home”.

He said that the draft of the next multiannual EU budget is, in his view, a reflection of the European Commission itself: “pro-immigration and pro-migration”, giving European citizens’ money to migrants and NGOs. “It is as if George Soros himself had written it”, he observed.

The Prime Minister described the past half-decade as the EU’s least successful five years, pointing out that it has not succeeded in defending the continent against migration, that with Brexit “we have lost the United Kingdom”, and that Brussels has upset the balance between the western and eastern halves of the EU.

despite its achievements, he said, in the past fifteen years the European People’s Party has been slowly but steadily losing strength and influence, the reason being that it has created an “anti-populist people’s front” against newly emerging parties.

The Prime Minister said that the time has come not for an anti-populist people’s front, but for a Christian democratic renaissance, adding that “our left-wing and liberal opponents want to lock us in an intellectual cage”, dictating the topics of the day and what one should think about them. He likened this situation to the tactics used by the communists to eliminate civic parties.

Mr. Orbán identified the EU’s greatest weakness as a lack of internal trust, with the larger states using the European Commission as a tool against the smaller states. Therefore, he said, “in 2019 this Commission must go”.

He also said that Helmut Kohl had a precise understanding of the meaning of equality among the Member States of the European Union, and he valued the friendship of the Hungarian people. Bowing his head in memory of the German politician, he said that Chancellor Kohl’s political will paved the way for Hungary’s return to the community of the European peoples, and his political courage laid the foundations for the reunification of Germany and Europe.