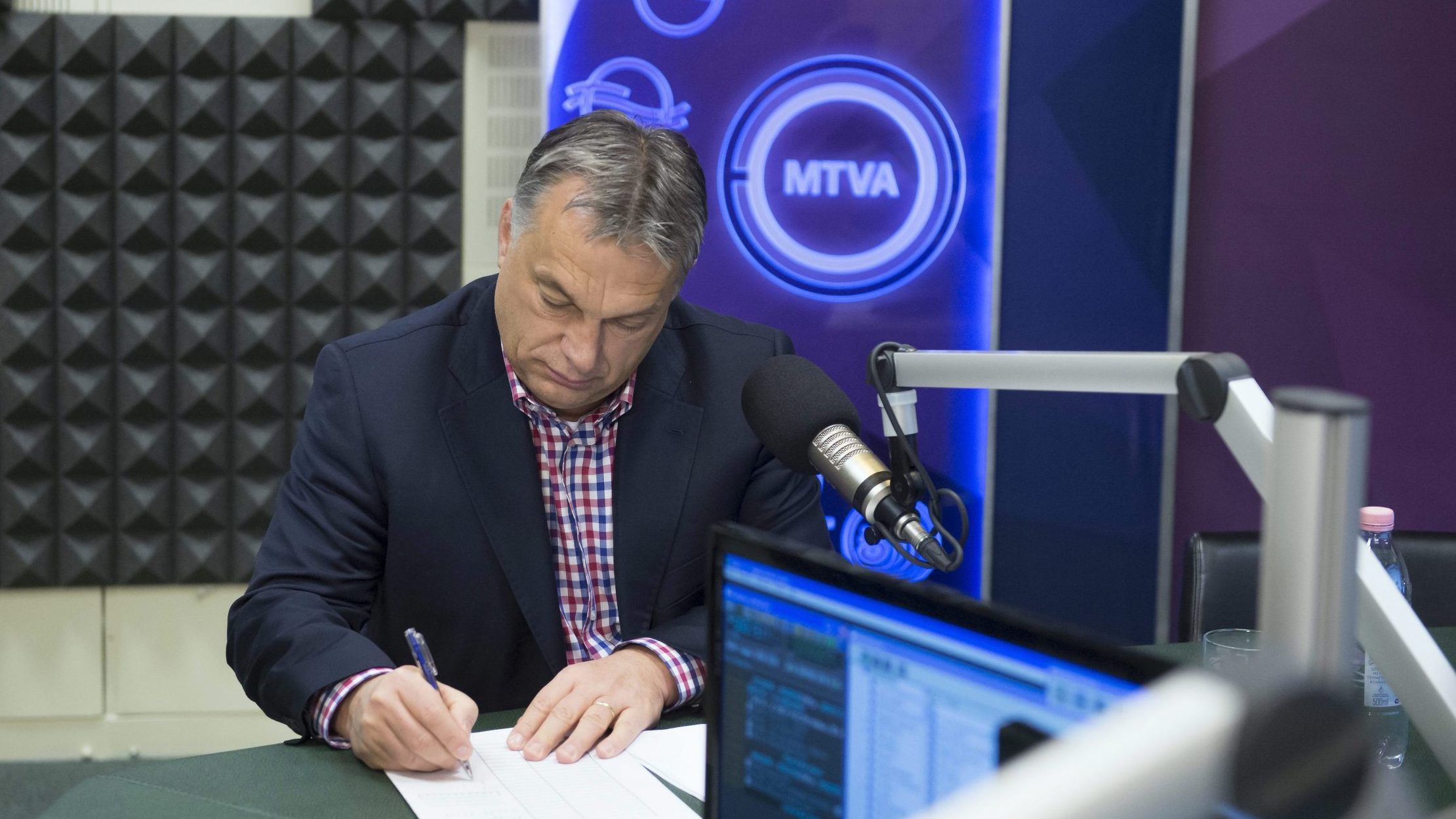 Those who want to have themselves vaccinated can register early
27. 11. 2020.
| source: Cabinet Office of the Prime Minister/MTI
Registration online and by mail could start as early as next week so that those who want to have themselves vaccinated against the coronavirus can register in advance to be among the first to have access to the vaccine, Prime Minister Viktor Orbán said on Friday on Kossuth Radio’s programme ‘Good morning, Hungary’.

With this solution, it is possible to assess how many persons are considering having themselves vaccinated, he added. He said vaccination plans have already been completed. One of them is about the general vaccination of people requesting the administration of the vaccine on a voluntary basis once vaccines are available in sufficient quantities, he said, stating that 13,000 locations have been designated for mass vaccination. Another vaccination plan to be deployed sometime in December to January lays down who will have priority access to the vaccines delivered to Hungary in the first round. This group includes frontline workers and people who are most at risk, he indicated.

He said at present the fight against the epidemic has two frontlines; in hospitals, lives are being saved, while in schools jobs are being saved because if parents are unable to take their children to school, they are not able to go to work either. The Prime Minister said at this time he does not see promising signs as ever more people require hospitalisation. The number of people being treated in hospital will soon reach ten thousand; however, health care will stand its ground, there are one and a half times this many reserve beds. The Prime Minister cautioned everyone, stressing that “we must hold on” and “if we observe the rules, we will succeed”.

He indicated that, in addition to health care and social workers, the testing of nursery and elementary school workers has also begun, and the second round will start next week. Mr Orbán repeatedly asked Hungarians not to book ski trips abroad because returning home they will face strict checks and stringent quarantine rules. He said the government will decide in 8 to 10 days’ time about the rules applicable to the Christmas and New Year’s holidays.

Regarding the EU budget and the crisis management fund, Mr Orbán said in Brussels’ book, only those letting in migrants and turning themselves into immigrant countries qualify as countries where the rule of law prevails, but “we will not do that, we will resist, and we will not accept the tying of any financial consequences to this”.

Mr Orbán confirmed that the Hungarian and Polish votes are indispensable for the adoption of the European crisis management fund and the EU budget; “our position is rock solid”. “I don’t want to conclude a compromise […], instead we should find a solution,” he said, adding that at this time efforts should be concentrated on channelling funds to the Member States in need and starting the next seven-year budget. He observed that the Hungarians and Polish have been saying ever since July that issues related to the rule of law simply cannot be tied to this.

He added that they had also identified the protagonist, George Soros who “is weaving a web in the background like a spider”. Regarding Soros’s Hungarian and US citizenship, he said it would be best if he returned home, as in to America. In his words, George Soros has a stranglehold on a great many Members of the European Union, but we must make it clear that he cannot have influence of any kind over European political issues. Already in 2015-2016, Soros wrote that Member States that are not prepared to let migrants in must be punished financially, the Prime Minister said, indicating that “what we have on the table now proposes the same, even if in somewhat more elegant terms”. The adoption of the European Parliament’s proposal would mean that “if we don’t let migrants in, they could take a part of our budget away from us,” he stated.

He observed that the establishment of such a link is not a legal issue, but an issue of a political nature, and while the latter can be changed, the Hungarian-Polish position is unalterable, “we cannot be bought off”. In answer to the question as to whether they have experienced any initiative aimed at driving a wedge between Hungary and Poland, he said there are attempts to divide countries proceeding as allies. In Central Europe, a cooperation scheme offering fantastic opportunities is about to blossom, he said, stressing that Central Europe is able to protect its national sovereignty, something that is “less in fashion” in the West. “We are able to protect our own countries from immigration,” while Western Europe now consists of immigrant countries. At the same time, Central Europe is also able to defend its Christian traditions and way of life, while in the West societies are “already multicultural,” he said.

In his view, the rebirth of Central Europe, the cooperation of the states of Central Europe is one of today’s defining historical processes, and the next ten years will be about this. In response to the fact that the opinion page Project Syndicate refused to publish his reply to George Soros’s article, Mr Orbán said so much about left-wing freedom of the press. There is always room for their own voice, while anyone with different opinions is to be silenced.

Regarding the issue of immigration, the Prime Minister also said that Brussels bureaucrats are sitting on the horse backwards because they regard immigration as a solution, despite the fact that it is the problem itself. Countries in the West have already started down the path of becoming immigrant countries. However, Hungary does not have such a problem, and as long as it has a national government, it will not because “Hungary belongs to the Hungarian people,” he stated, suggesting that in this sense we should “not allow ourselves to be westernised, we should not turn ourselves into immigrant societies, we should not switch over to multiculturalism”.