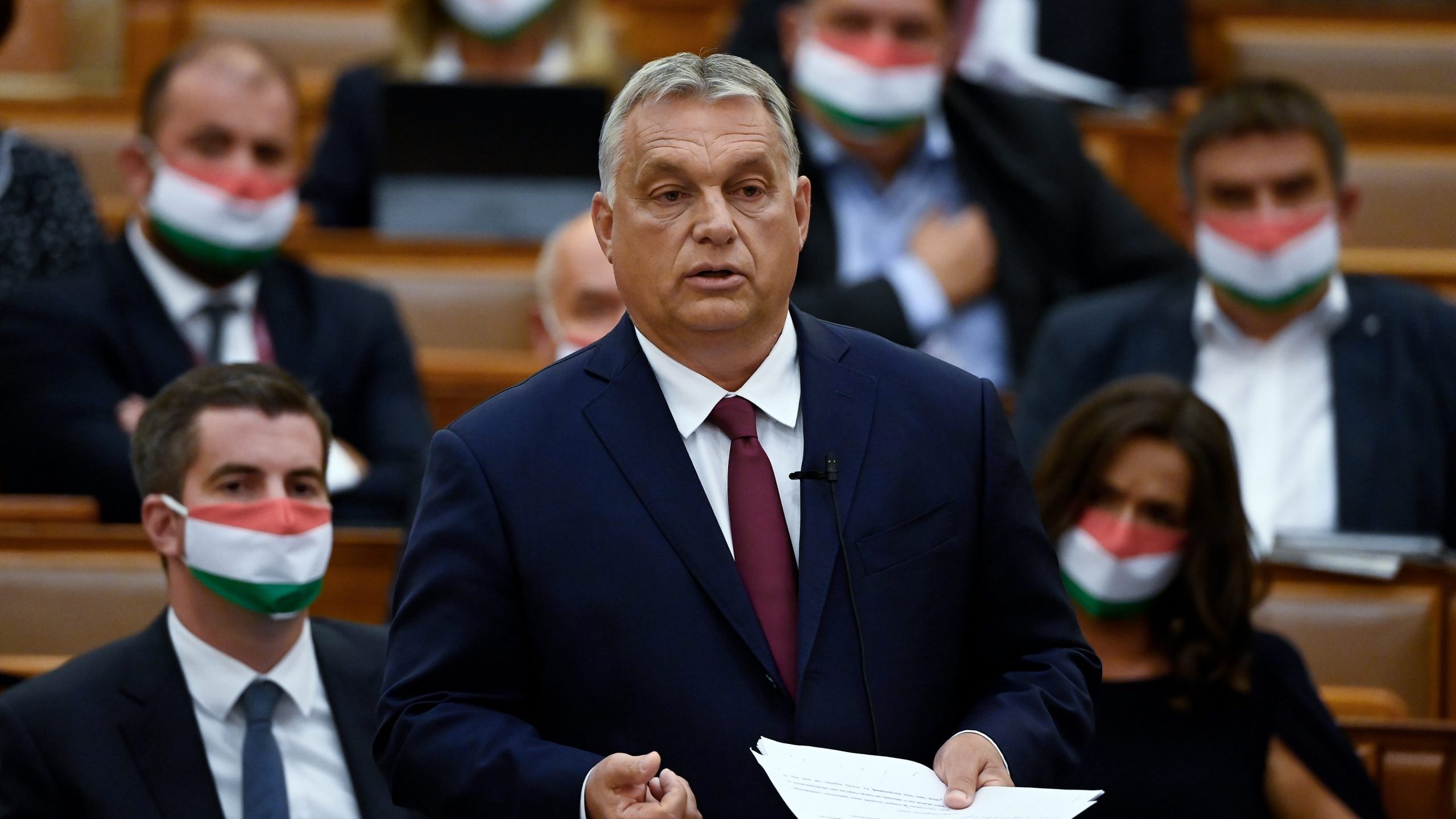 We are better-prepared than we were in the spring
22. 09. 2020.
| source: Cabinet Office Of The Prime Minister
This autumn “we are better-prepared” in the fight against the coronavirus epidemic than we were in the spring, Prime Minister Viktor Orbán said on the opening day of Parliament’s autumn session, before the start of ordinary business, stressing that by combining forces with the Hungarian people, they successfully warded off the first wave of the epidemic, and “together we will succeed again”.

“We have a difficult period behind us, and we have a difficult period ahead,” the Prime Minister said regarding the coronavirus epidemic, indicating that the second wave is here. Outlining international data, he drew attention to the fact that in Austria – viewed from Hungary’s point of view as a laboratory – the number of persons requiring hospitalisation has risen by 35 per cent in a day.

However, “now, in the autumn of 2020, we are better-prepared than we were in the spring of 2020”. The reason for this is, on the one hand, that we now have the experience of the spring containment effort, and on the other, that in the national consultation the people sent a clear message to the government: Hungary must remain up and running. The people expect both their lives and their jobs to be protected so that the virus cannot paralyse daily life, meaning that we must contain the epidemic in a way which enables us to protect the lives of the elderly most at risk, the operation of schools and nursery schools, and jobs all at once, he explained, indicating that this is a different tactic now compared with the spring, and so there is a different battle plan, a different response. “Today we should no longer be concerned that anyone should be left without care,” he stated.

He informed Members of the House about the latest decisions of the government, including the maintenance of travel restrictions for foreigners, the extension of the compulsory wearing of face masks – regarding which he initiated a legislative amendment that would allow the raising of the present maximum fine of HUF 50,000 – the visiting bans in hospitals and elderly care homes, the introduction of compulsory body temperature checks in schools, the fixing of the official price of coronavirus tests at maximum HUF 19,500, free flu vaccination, and the closing of entertainment venues and catering establishments at 11.00 p.m.

“At this time, it indeed depends on us all how successful our containment effort will be,” he stressed, specifically addressing young people, reminding them that if they fail to observe the rules, they could jeopardise the elderly and the sick.

Referring to the estimates of mathematicians and physicians, based on a worst-case scenario, there could be as many as 200,000 infections simultaneously in the country, and as expected, in this case, 16,000 of them could require hospitalisation and 800 assisted ventilation. He added at the same time that for the sake of remaining on the safe side, he calculates with twice those numbers, and so Hungarian health care should be able to cope with as many as 400,000 infections at once, some 32,000 hospital beds could be made available, and health care is also prepared for the eventuality that rather than 800, several times that many patients might require assisted ventilation.

According to his information, today there are 66,000 hospital beds in the country, and if necessary, they can open further camp hospitals. At the same time, the essence of the carefully developed deployment plan is that if a designated hospital runs out of capacity, the next one is appointed for the treatment of coronavirus patients to which health care workers are transferred from other institutions.

He recalled that in March “we were up against an unknown enemy,” and as there is no vaccine to this day, there was no choice but to slow down the spread of the virus in order to gain time and to prepare health care. In a week, the country switched over to a new operating model, and started its defence strategy sooner than most European countries, he said.

The Prime Minister mentioned that while the first weeks came as a shock, the country stood its ground well, “we won the first battle,” and the much-criticised Hungarian health care system was able to protect the people. For this, he thanked physicians, disease control experts, nurses, Chief Medical Officer Cecília Müller, the Operational Group, Minister of Human Capacities Miklós Kásler and Minister of Interior Sándor Pintér.

Regarding the state of the economy, the Prime Minister stressed that they would not compromise on the protection of Hungarian people’s jobs, and according to the latest information, in August more people had jobs than in January when 4,458,000 people were in employment, while at the end of August as many as 4.5 million. Almost a million Hungarians received labour market and training support of some kind as part of the various grants, he said.

Fifteen thousand Hungarian businesses availed themselves of job protection wage grants, protecting the jobs of more than 207,000 workers. Some 37,000 businesses submitted applications for job creation wage support, pledging to create 49,000 new jobs. The government provided a 40 per cent pay support contribution for 3 months in the interest of retaining the highly qualified workers of the research, development and innovation sectors, in response to which more than 1,100 companies submitted applications; this saved the jobs of 23,000 people, he pointed out.

“There are jobs, and there will be jobs,” he stated.

He also spoke about the protection of homes, indicating that it is to this end they decided to extend the credit debt repayment moratorium for another six months – to 1 July 2021 – for families raising children, pensioners, the unemployed and persons participating in public works schemes. He added that with the aid of the moratorium, the homes of some 1.6 million people are safe and excess funds worth HUF 2,000 billion have been left with families and businesses. He concluded that there is no other nation that manifested such a high degree of solidarity of this kind.

Regarding investment support, Mr Orbán said the goal is – at this time when all other countries are introducing austerity measures – that Hungary should not remain merely defensive, but should also seek to grow and to develop. This is why they launched an investment incentive programme protecting jobs whose allocation was raised right at the beginning from HUF 50 billion to HUF 170 billion. 904 investors applied, pledging to implement investments worth HUF 424 billion during the period ahead and thereby protecting the jobs of 154,000 Hungarian workers, he laid down.

So far 5,500 grant requests have been submitted in response to the programme which serves to develop Hungarian small and medium-sized enterprises, the amount of pledged investments reaches HUF 193 billion, while the number of protected jobs is around 130,000, the Prime Minister said.

“So far, we have managed to protect the Hungarian people’s jobs and homes, and have also succeeded in strengthening businesses, meaning that we are able to restart the economy,” he said, adding that “after the Left’s tragic governance,” between 2010 and 2014 we already managed to help Hungary back on its feet and to restart the economy, having created almost a million jobs between 2010 and today.

“This spring, we managed to successfully ward off the first wave of the epidemic, combining forces with the Hungarian people, together,” “we’re doing the same now; we have a difficult autumn ahead, but we already did it once before, and together we will succeed again,” the Prime Minister stated.

In Parliament, Mr Orbán also rendered an account of the four-day EU summit held in the summer, highlighting that EU heads of state and government reached an agreement on the financial-budgetary system of the next 7 to 10 years which will consist of two parts, the usual budget and a fund whose mission it is to compensate for the “devastation” of the coronavirus epidemic.

He recalled that before the Brussels negotiations, Parliament identified tasks for him and the government which they made every effort to fulfil. The first important expectation was that Member States in comparable situations should be afforded comparable treatment.

In this regard, he said net EUR 31 billion will flow into the Hungarian economy, the equivalent of EUR 4 to 4.5 billion a year. For the sake of reference, he said in 2019 foreign businesses operating in Hungary generated profits worth EUR 9.6 billion in total, while Hungarian businesses operating abroad generated profits worth EUR 1.6 billion, meaning that the annual balance is minus EUR 8 billion. Deducting from this the EU funds intended for Hungary, the difference is an annual EUR 3.5 billion.

Looking at figures from this point of view, the amount negotiated in Brussels will significantly reduce Hungary’s capital deficit, the Prime Minister stressed, indicating at the same time that by 2028 Hungary will be close to a situation where it could become a net contributor to the EU budget. Therefore, by then we should reach a situation where we are able to generate a profit of EUR 9.6 billion abroad; we would then reach a state of balance, he explained.

He said this goal can be achieved in one of two ways; on the one hand, by buying out foreign businesses operating in Hungary which is under way, and on the other, by increasing Hungarian investments abroad which is also under way.

According to his conclusion, in the EU, Hungary has been assigned the 6th highest amount of funds, and other than Lithuania, we are only preceded by countries whose national incomes are below that of Hungary, meaning that Parliament’s expectation has been fulfilled.

Mr Orbán also informed Members of the House that, in accordance with the provisions of the relevant parliamentary resolution, he initiated the conclusion of the procedure instituted against Hungary under Article 7 before the end of the German EU presidency. In his view, there is no obstacle to the conclusion of the procedure. The representative of the German government confirmed this intention, but made no promise of any kind and the Hungarian government received no guarantee of any kind. German Chancellor Angela Merkel said she would make efforts to make this happen.

The Prime Minister further suggested to the European Council – but failed to achieve a favourable outcome in this regard – that the practice of providing EU grants for political parties and organisations engaged in political activities which function “in the guise of NGOs” should be brought to a conclusion. The initiative provoked keen opposition, but Hungary will keep the issue on the agenda, and it would be a good idea if a separate task force dealt with this issue in Parliament, he said.

He also informed Members of the House that the government had taken an important step towards ruling out the tying of the disbursement of funds to political and ideological conditions. Hungary made it clear that we are committed to the rule of law, but neither did we conceal the fact that the gathering of political accusations without clear legal categories under the concept of the rule of law violates the fundamental principles of the rule of law. “What the European Left refers to as ‘rule of law’ is in actual fact ‘rule of blackmail’; rather than a clause about the rule of law, it is a clause about the rule of blackmail,” he said, stressing that together with Poland they managed to foil the institution of EU procedures for the purpose of blackmail and to achieve that these steps should not jeopardise Hungary’s financial interests.

On Thursday and Friday, the European Council will hold an extraordinary meeting, and news reports have spread that this issue will also be on the agenda. However, this is not true, the Greek-Turkish conflict will be on the agenda of the summit, he said.