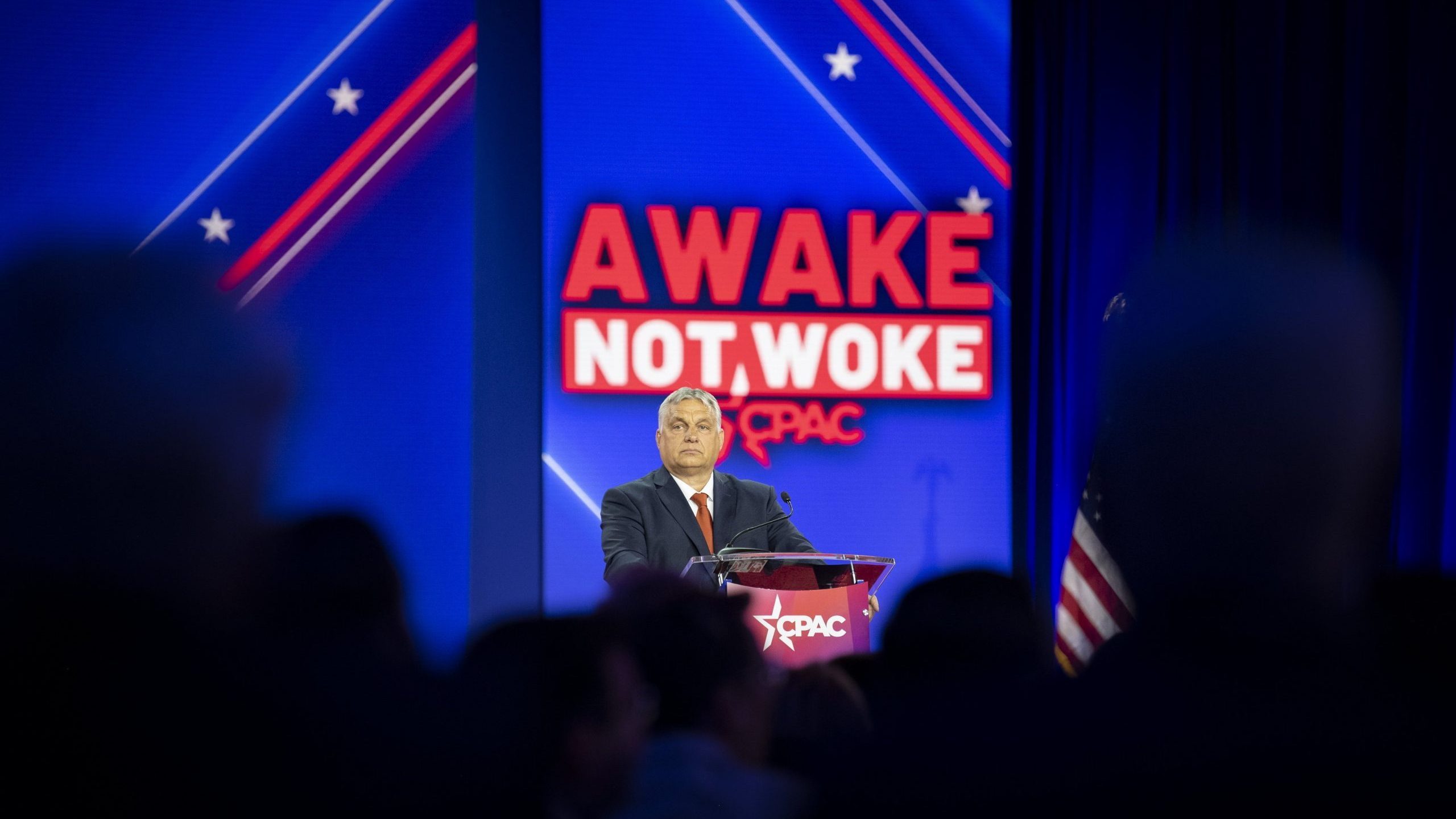 We should unite our forces
05. 08. 2022.
| source: Cabinet Office of the Prime Minister/MTI
We should unite forces with the American conservatives because “we Hungarians know how to defeat the enemies of freedom on the political battlefield,” Prime Minister Viktor Orbán stated on Thursday in Dallas, Texas, delivering an opening speech at the summer conference of the American Conservative Union, CPAC.

He stressed that in 2024 important elections would be held both in the United States and the European Union, and “these two locations will define the two fronts in the battle being fought for western civilisation”.

“If someone has doubts whether progressive liberals and communists are the same, just ask us Hungarians,” they are the same, the Prime Minister said at the largest conservative event.

He stressed that “our values: the nation, Christian roots and family can be successful in the political battlefield,” even nowadays when political life is ruled by liberal hegemony. We made these values successful and mainstream in Hungary, he laid down.

The Prime Minister took the view that the key to our success story is that when we fight we give 100 per cent: “we tell the truth and represent the truth, even if half the world attacks us for it”.

So, first and foremost: we need to trust our Judeo-Christian teachings, he added.

Based on the teachings, we have to be brave enough to address even the most sensitive questions: migration, gender, and the clash of civilisations, Mr Orbán argued, adding that a Christian politician cannot be racist.

He pointed out that the government had introduced a zero-tolerance policy on racism and anti-Semitism, so “accusing us is fake news”.

The Prime Minister also said the US administration led by the Democrats had put Europe and especially Brussels under ideological pressure. He stressed that the US administration led by President Barack Obama “tried to force us to change the Fundamental law of Hungary, and delete Christian and national values from it”. The leading power of the free world “wanted to force us to change our constitution according to a globalist liberal concept,” he said, adding that we resisted this attempt successfully.

He said that Texas is also referred to as the Lone Star State of the United States which means that “independence, freedom, and sovereignty are the dearest values in this part of America”. “My country, Hungary, is the Lone Star State of Europe,” independence, freedom, and sovereignty is what we Hungarians fought for in the last 500 years, he said, adding that “we fought for Christianity in the Middle and Modern Ages, and we fought for Christian democracy in the twentieth century, and continue to fight to this day”.

He observed that he was the leader of a country “that is under the siege of progressive liberals day-by-day”.

Referring to the latest progressive movement, he highlighted that “Hungary is an old, proud but David-sized nation standing alone against the Woke Globalist Goliath”. This is why we invite the solidarity of American conservatives, he added. At the same time, he thanked previous President of the United States Donald Trump for his endorsement before the latest Hungarian elections.

He also said “the eggheads of the European Union” want to put pressure on us as well. We must take back the institutions in Washington and in Brussels, “we must find friends and allies in one another,” he said. He recalled that this year in the United States midterm elections will be held, followed by presidential and congressional elections in 2024. In the same year in Europe, elections will be held in the European Parliament. These two locations will define the two fronts in the battle being fought for western civilisation, the Hungarian Prime Minister indicated. As today we hold neither, the next two years will not be easy, he warned.

The Hungarians were the first ones in Europe who said no to illegal migration, and stopped the invasion of illegal migrants thanks to the wall erected on the border. Mr Orbán said the Hungarian people believe that stopping illegal immigration is necessary to protect our nation.

The Prime Minister specifically mentioned that in Hungary the Constitution protects families and children. In Hungary, the government had to build not just a physical wall on our borders and a financial wall around our families, but a legal wall around our children to protect them from the gender ideology that targets them, said the Prime Minister whose address was often enthusiastically applauded by members of the audience.

He also said the Hungarian people rejected sexual orientation programmes in schools without parental consent at a referendum. Never before has there been a referendum in the history of Hungary where such a huge majority of people said no to something, Mr Orbán stressed.

In his address, he pointed out that according to his political philosophy, family is the place to transfer the values of parents to a next generation. If traditional families are gone, there is nothing that can save the West from going under, Mr Orbán stated.

He added that therefore last year Hungary had spent more than six per cent of GDP on family policy.

Mr Orbán also stated that Hungary was Europe’s safest country. He stressed that according to the government’s position, law enforcement agencies are not peoples’ enemies. At the same time, the police should be well-respected.

He defended the policy of tax reductions. He took the view that the progressives “always want your money,” while the Hungarian government believes that people should have their money in their own hands. He said in just 10 years’ time we reduced the tax wedge by 10 per cent which was the biggest tax cut in the European Union.

Recently, however, “we came under fire again when we went against the Global Minimum Tax initiative,” he pointed out; all European countries surrendered, Hungary is the last man standing.

He was critical of the fact that the incumbent US government decided to terminate the tax treaty between Hungary and the U.S which was “probably the best tax deal ever negotiated”. In actual fact, it was the revenge of the Left “because the U.S. Treasury somehow forgot that they have a very similar treaty with Russia”.

Regarding the war in Ukraine, he took the view that without American-Russian talks there will never be peace in Ukraine. Ukraine is Hungary’s neighbour, and “we are in full solidarity with them”. The attack of Russia against Ukraine has forced close to 1 million refugees to Hungary so far, and also today more than 10 thousand refugees are arriving every day.

According to the Prime Minister, the globalist leaders’ strategy escalates and prolongs war, and decreases the chance of peace.

Only strong leaders are able to make peace, he pointed out, adding that in the neighbourhood of Ukraine we are desperately in need of strong leaders who are capable of negotiating a peace deal. We also need a strong America with a strong leader, he added.

The Prime Minister stressed that you must play to win, “you have to believe that you are better than your left-liberal opponents”. He took the view that this war is a culture war, and we have to revitalise our churches, our families, our universities and our community institutions.

He said that we must not be afraid to call our enemies by their name. He mentioned George Soros as his own opponent. “He believes in none of the things that we do.” In his view, George Soros has an army at his service: money, NGOs, universities, research institutions and half the bureaucracy in Brussels, and he uses this army to force his will on his opponents.

CPAC is a right-wing conference series established in 1974 which is organised by the American Conservative Union (ACU). During its history of almost half a century, it has grown to be the ACU’s most popular event mobilising tens of thousands of conservatives. In May, for the first time a CPAC conference was also held in Budapest under the title ‘CPAC Hungary’.

Speakers of the three-day Dallas conference include former US President Donald Trump, several Republican members of the US Congress and governors as well as invited guests from Brazil, Israel and Britain. Another speaker is Miklós Szánthó from Hungary, Director General of the Center for Fundamental Rights, the organiser of CPAC Hungary.