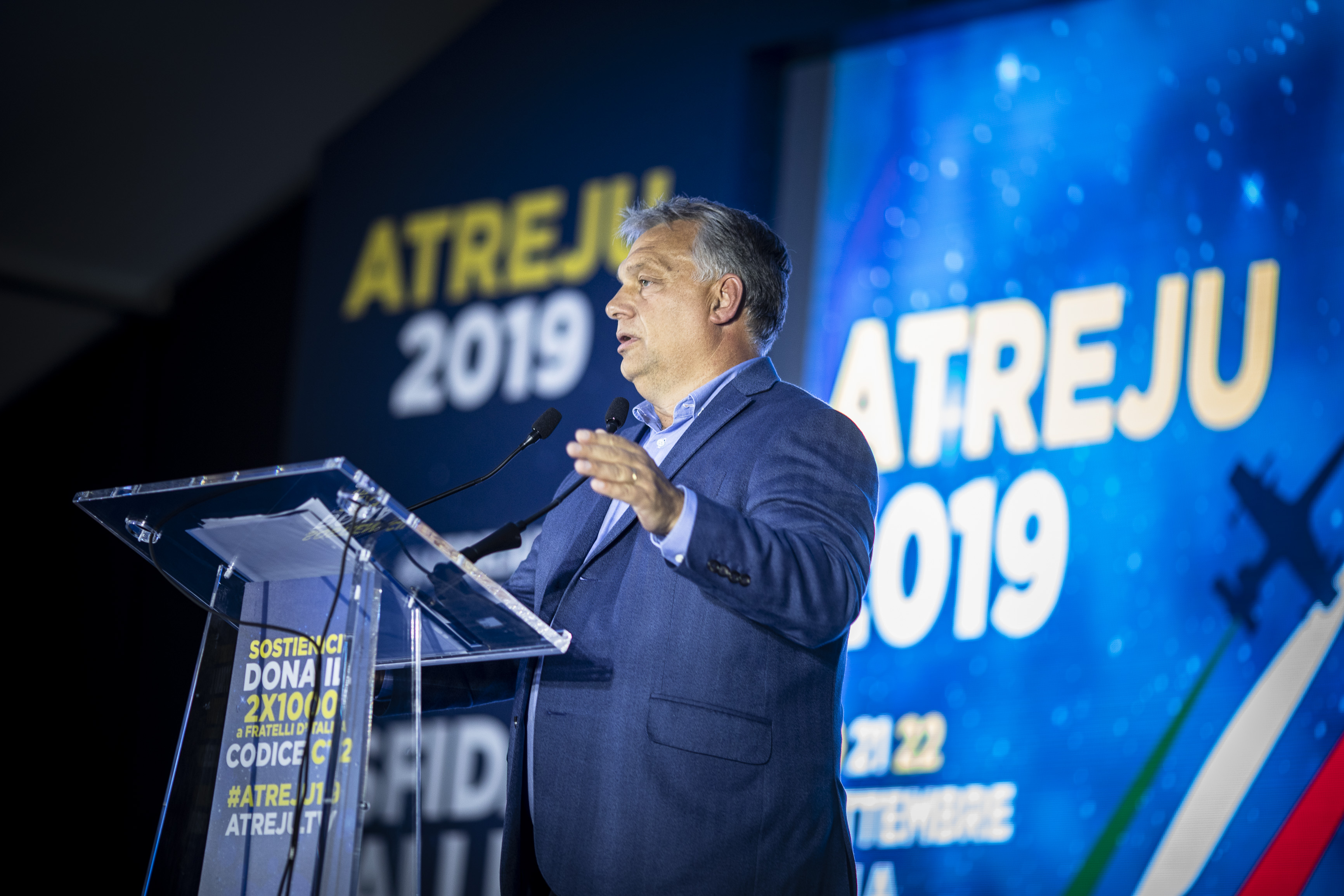 The Left wants to bring in migrants
21. 09. 2019.
| source: miniszterelnok.hu
In Rome on Saturday, at a congress of the national-conservative party Brothers of Italy (Fratelli d’Italia, or FdI), Prime Minister Viktor Orbán said that Hungary is ready to assist Italy however it can, and so if Italy is determined to defend its borders, Hungary will help in taking migrants back to their homelands. He said that the Left wants to bring in migrants.

In his speech, Mr. Orbán was responding to Italian prime minister Giuseppe Conte, who at the event had said that the Visegrád countries are not helping Italy with regard to migration policy.

The Hungarian prime minister said that Hungary cannot help by bringing migrants into its territory from anywhere.

He observed that European unity is facing a great trial, which is being caused by migration. There are countries where migration has been successful, he said, and where part of the population is no longer a part of Christian culture; and accordingly those societies are preoccupied with the question of how two totally different cultures can live together in one country. Yet in other European countries, including Hungary, he noted, there are no Muslim migrants. He added that such countries are working to ensure that they have no such dilemmas related to coexistence.

The Prime Minister stressed that all peoples have the right to decide who they want to live with, and if a people decides that it does not want a multicultural society, in a democracy it also has the right to this.

He went on to say that, according to several Western European leaders, if a variety of large population groups are admitted to live alongside the Christian majority, this intermingling will lead to the emergence of a new society and something of higher quality. Central Europe, however, does not share this view, because it is convinced that this will not lead to integration and living together, but to groups living side by side.

He also declared that at the very start of the migration crisis it could be seen that nine out of ten migrants were not refugees, but economic migrants. But, Mr. Orbán said, the Left has an intellectual conception, in the service of which it exploits migration: its goal is for Europe to leave behind nations and the Christian life, and to move into a post-Christian era.

He explained that the Left has an interest in migration, because when it brings in migrants it is in fact importing people who will vote for it. He stated that the Left thinks that migrants will never vote for policies based on Christian values, and if large numbers of migrants arrive, then the chances of there being majority support in Europe for politics built on Christian values will be reduced, and eventually disappear.

The Prime Minister said that in his opinion another sign of left-wing politicians’ desire to bring in migrants is the fact that the mandatory migrant resettlement quota is once again on the agenda.

In reply to a question, Mr. Orbán said that the reason for the aggressive campaign being waged against Hungary and the pressure it is being subjected to is that the country is not obeying Brussels on the issue of migration: if Hungary were to admit migrants, the criticisms related to the rule of law would cease.

He noted that “there are exciting days ahead of us in international politics”: the Austrian and Polish elections are approaching, there will be local government elections in Hungary, and “we’re also waiting for Italy to return to the club”.

Mr. Orbán also said that in Hungary in recent years a model of political and state theory has been developed, and a Christian democratic state has been built. The Prime Minister stressed that this model is working and is successful: its political success is obvious, as the Government has won three consecutive parliamentary elections with two-thirds majorities. He added that it has also produced results in economic terms.

He explained that this model is based on three pillars: the family, the nation and Christian freedom, with the foundation of the model being the new Christian constitution adopted in 2011.

Speaking of the family, the Prime Minister said that it is an alliance between one man and one woman, and every child has the right to a mother and a father.

Mr. Orbán listed the elements of Hungary’s family support system, adding that “despite this, the situation is not good”, because there are still far fewer children being born than are needed. He stated, however, that if no attempt is made to combat the negative demographic trend, then it can never be reversed.

The Hungarian prime minister declared that he will not support any policy that attempts to correct the shortfall in children being born by bringing in migrants.

In relation to the nation, Mr. Orbán said that the nation is sovereign and cannot be forced to subject itself to any laws of global governance; it is an irreplaceable value that must be protected. He pointed out that “Only we may decide on who can live in our country’s territory”, adding that the nation is protected everywhere except Europe, and this must be changed.

Mr. Orbán also said that, among the European political elite, people who think “like us in Hungary and you here in Italy” are in the minority; but within the nation and among the people they are in the majority. He stated that their opponents are large, wealthy, strong and well-organised, so the battle which must be fought for a good cause is unfairly difficult. The Prime Minister added that this will continue to be the case, but one must not surrender to self-pity, and one must act in accordance with the saying: “Trust in God and keep your [gun] powder dry!”

The Prime Minister also said that it is worth remembering that what made Europe great and gave it its mission in the world was the establishment of a way of life in which, through their work, people simultaneously served their own interests, the good of their homeland, and the glory of God. He declared that the modern form of this must be discovered, so that Europe can be great once more.

We are fighting for the interests of families in Brussels