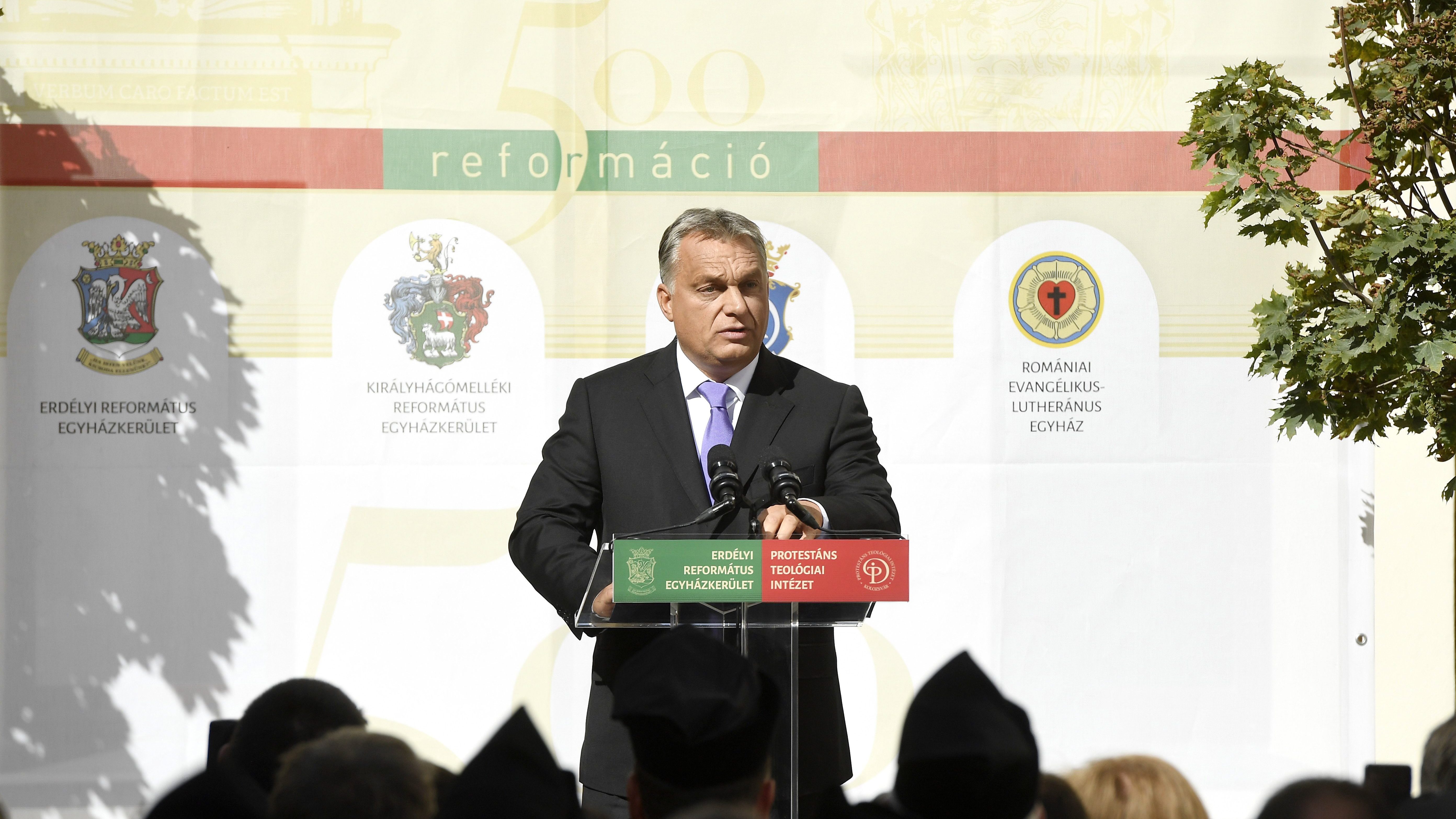 The future is written in Hungarian
01. 10. 2017.
| source: Cabinet Office of the Prime Minister
Speaking at the Protestant Theological Institute in Kolozsvár (Cluj-Napoca), during the largest Transylvanian event of the jubilee year organised to mark the 500th anniversary of the Reformation, Prime Minister Viktor Orbán declared that the entire Carpathian Basin is on the threshold of the age of national pride. He also spoke about pastoral service in its purest form as a requirement for young theologians.

In his speech Mr. Orbán said that “the future is written in Hungarian”.

Maintaining Hungarian communities, he said, is one of the precepts of the national mission, which “is to fight to ensure that people can prosper, study in Hungarian, and live as Hungarians in the land of their birth”.

Asking whether the strength required for the next 500 years still exists, the Prime Minister declared: “Deep and strong are the roots that sustained us after the Battle of Mohács and our country’s division into three, and after we were hacked into five parts almost a hundred years ago; they sustained us throughout the years of communist dictatorship and also in recent decades”.

“If we have succeeded in remaining upright, like an oak tree, even under the weight of 500 years of history, then we shall continue to stand tall throughout the next five hundred years”, Mr. Orbán said.

“Five hundred years ago the Reformation was the answer to a Europe that had set out on the wrong path”, he noted, asking whether there is a “Reformed remedy” for Europe’s current cultural exhaustion, economic retreat, demographic decline and surrender in the face of foreign cultures.

Mr. Orbán outlined his belief that five hundred years ago the Reformation had also mapped out the correct path for the continued survival of the Hungarians, had created Hungarian language literature and had “established the border fortress system of national resistance: Protestant schools”. He stated that the churches’ messages for Europe, the Western world and Hungary today are: “Remain how God created you. Remain true to your nationality, sex and faith. Preserve order, and order will preserve you. Preserve your churches and schools and preserve yourself in Christianity, and Christianity will preserve you”. He pointed out that in 1989 Romania also set out on its road to freedom from the Reformed parish of Temesvár (Timișoara).

“All this both provides encouragement to people today and presents them with a task”, he asserted: “A task to preserve and continue the unique intellectual and cultural tradition that the churches of the Reformation created here in Transylvania, the cradle of European freedom of religion. We must inhabit this intellectual and geographical area, just as it is also our task to create a home in it for future generations of Hungarians”.

“Though dispersed and separated by borders, the Hungarians are still the members of a common body”, he said, adding that “We are building a unified Hungarian nation that has joint goals and joint tasks, and which now also makes joint decisions”.

Speaking to his audience of theology students, Mr. Orbán declared: “After years of decline and confinement, there will now follow an era of growth, prosperity and expansion, an era of heads held high and national pride – not only in Hungary, but throughout the entire Carpathian Basin; and in this task Protestant congregations are the Hungarian nation’s forward garrisons. Your task will be to gather together your families at your posts and tell them that the future will be written in Hungarian”.

He also added that the period ahead will be one in which the limits to growth and fulfilment are not external, but internal. “The span and scale of our achievement will be that allowed by our courage, determination, talent and integrity”, he said. The Prime Minister asked the theology students to be proud of the fact that, as Protestant ministers, they will have the opportunity to launch the next five hundred years of the Hungarian nation.

Those attending the event were able to watch the Prime Minister’s speech on screens set up in the courtyards of the Protestant Theological Institute.

Future of Hungarians lies in communities proud of their past, confessor ancestors and values 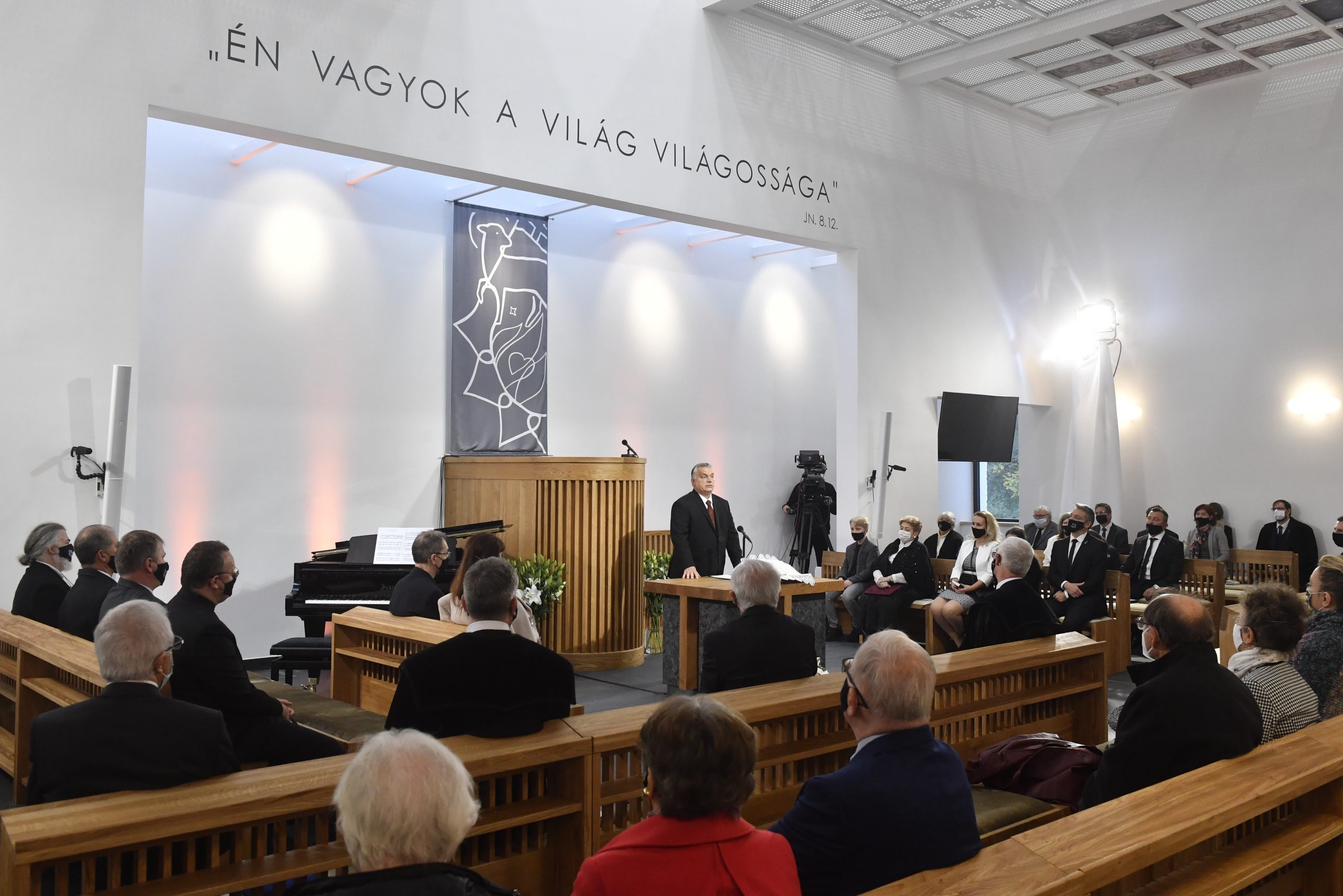 We are ready to stand by Reformed Church also henceforth