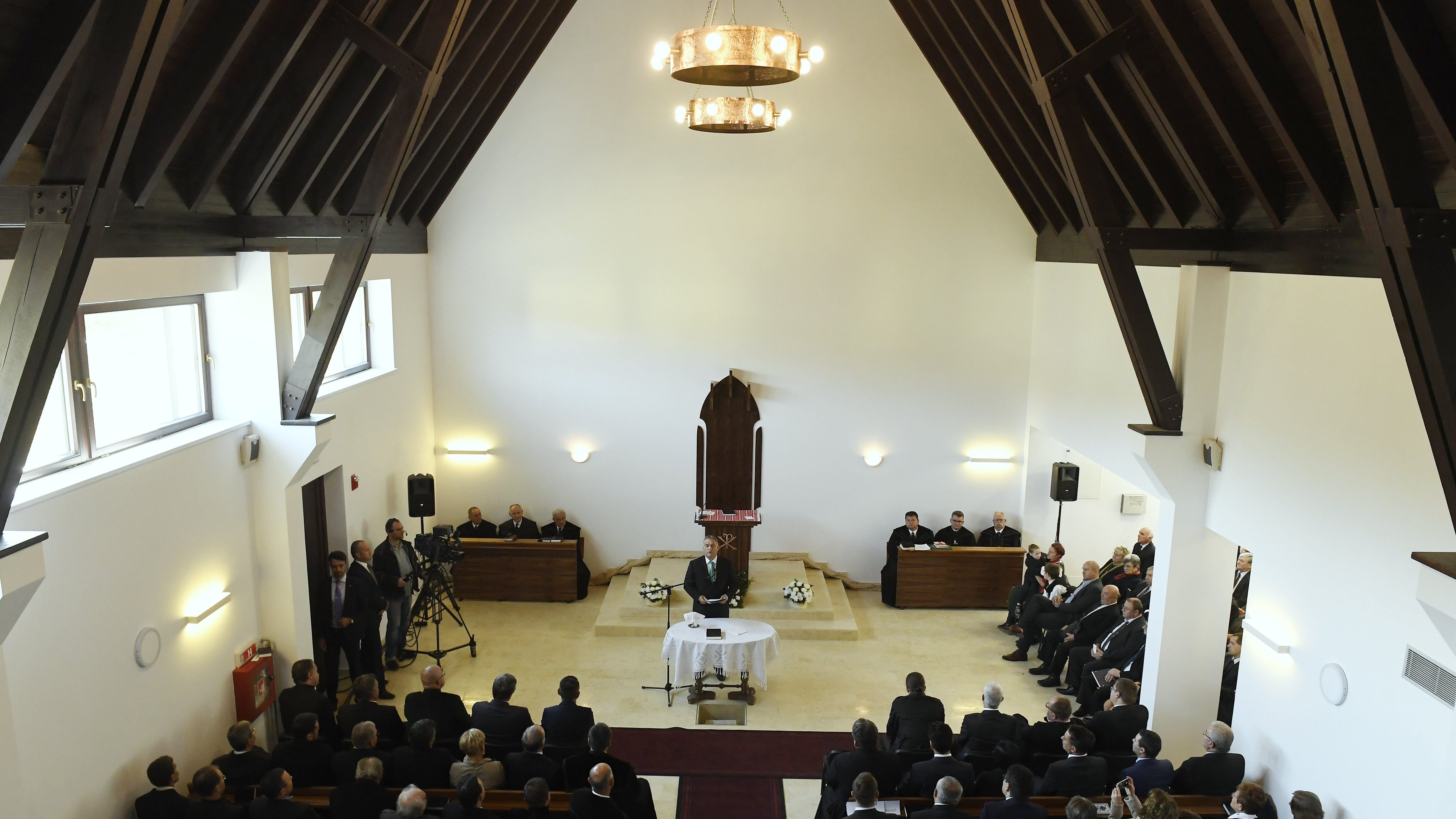 Praising the settlement’s Protestant community for its work in building a congregation and a church, the Prime Minister said: “Where there is work, and where there is will – a will to act and solidarity – assistance will not be withheld […] We are proud that the Hungarian government has had the opportunity to fund completion of this church”.

He pointed out that the assistance provided towards construction of the church is also in part thanks to the fact that in 2014 the Hungarian communities in the Carpathian Basin had the opportunity to collectively decide on “a national policy that transcends borders and assumes responsibility for all Hungarian communities”, adding: “Please do not forget that next year the time will come again, and we will be able to further reinforce this alliance”.

The Prime Minister went on to say the following:

Mr. Orbán stated that the western half of Europe is doing away with its religious symbols out of disinterest of naivety, and is turning its back on its own culture without even noticing that in doing so it is throwing away its own future. “The dedication of this church today is a sign of something more: it is like an ocean in a drop of water. The Hungarians are demonstrating their will to survive”, he emphasised.

The church service began with a baptism. The newest member of the congregation was baptised by István Bogárdi Szabó, Bishop of the Dunamellék Diocese of the Reformed Church.

In his sermon, Transylvania Reformed Church Bishop Béla Kató cited the example of the biblical Cities of Refuge, expressing the wish that the new church will be such a refuge. “For us, the Hungarians of Transylvania, our institutions represent our refuges, where we can preserve our native language and culture”, the Bishop said. He pointed out that the church has been built to accommodate a nursery school and kindergarten on the site next to it, which means that not only can the adult members of the congregation find refuge in the church, but they can also bring their children.

Following the inauguration ceremony, Mr. Orbán reminded the Christians assembled in front of the church that they too can vote at Hungary’s parliamentary elections, and he asked them for their support in this next April. “I will only be able to help you if you also help us”, the Prime Minister said.

Szászfenes (Florești), which lies west of Kolozsvár (Cluj-Napoca) and has practically become part of the city, has almost quadrupled in population over the past fifteen years. Tens of thousands of people, mostly from Kolozsvár, have moved to the settlement’s housing estates because of lower property prices. The settlement’s Roman Catholic church, which was built in the 14th century, was used by Protestants for two centuries following the Reformation, but until now no Protestant church had ever been built in the settlement. The town’s Protestant community, which has since grown to over one thousand, first held its services in a private house, then in the settlement’s cultural centre, and after that in a guest house owned by one of the congregation’s elders.

Prior to the church’s dedication, Pastor István Máté told reporters that the project cost a total of 3.5 million lei (EUR 760,000), towards which the Bethlen Gábor Fund Management Company has contributed 160 million forints (EUR 513,000).

Future of Hungarians lies in communities proud of their past, confessor ancestors and values